Stephanie participated in the 2013-2014 Academic Year program in Morocco.

Marrakesh is a large city with new tourists swarming each day. Given the size of the population it seems as though it would be impossible to run into the same person twice, and considering that I have enough mastery of the Marrakeshi bus system that I rarely have to ride a taxi the chances of running into the same taxi drivers are even slimmer. Even with all of these factors there have somehow been two instances in which the taxi drivers have had me in their taxis before. I have always considered taxis to be one of the best place to practice Arabic because you can figure out exactly how much time you were able to speak Arabic, taxi drivers are usually extremely friendly and willing to talk, and you will never see them again. However, in a month I have discovered that it is quite possible to see them again, but instead of that being a deterrent it has only made the conversations more interesting.

The first time I was in a taxi with a driver that had previously driven me before it happened to be with a taxi driver that I did not particularly like. My first time being driven by him I nearly had to get out of the taxi because he was refusing to turn on the counter, but I managed to convince him to begrudgingly turn it on. After that experience I figured that a second experience with the same taxi driver would be no different, yet when I got into the taxi he treated me like an old friend and spent most of the time explaining the train system in Morocco. In twenty minutes I learned about Morocco and the taxi driver, and realized that the first time I really had not received a good impression of the driver.

The second time I got in a taxi in which the driver recognized me I actually had absolutely no recollection of him, but he definitely remembered me. He knew the center I was studying at and knew that I was studying Arabic. Like a typical Moroccan he made sure I was ok and asked me if my Arabic was coming along. I told him that I was currently focusing on Arabic grammar, which was turning out to be quite difficult. This launched him into a full on lesson of both grammar in Modern Standard Arabic and Darija. In the end what I gleaned from his lesson was that there are several aspects to grammar and it would be hard for me to learn it, but that in my time in Morocco I could manage to learn a good deal of Arabic. Following my brief Arabic lesson the taxi driver asked me what was wrong with the United States government and completely surprising myself, I was able to explain the government shut down to a taxi driver in Arabic.

Considering that a month ago my ability to hold a conversation was limited to a brief one to five minute conversation, being able to now hold fifteen to twenty minute conversations feels like a huge step even though I know there is still quite a distance to go. Not only the quantity of time I now spend talking, but additionally being able to have mildly interesting conversations gives me the feeling that I am finally starting to catch onto something and that I am truly beginning to connect and understand people rather than constantly observing them. 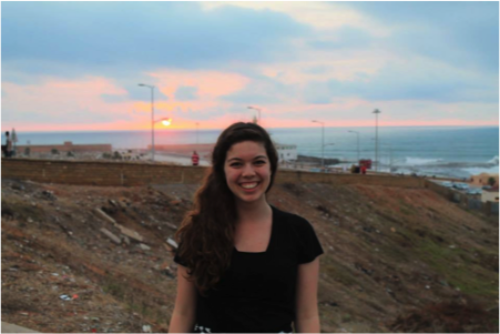