When I showed up for my first class in October, the people at the studio were so confused as to how and why an American ended up at this small studio in Kazan. At this studio, no one speaks English. And I, with my modest language skills, couldn’t necessarily articulate how or why either. Now, I go three times a week and I absorb new things like a sponge. I don’t think I’ve gone to one lesson without picking up new words, phrases or jokes, on top of the choreography. Every class, I get the chance to practice speaking with my friends there, who correct me and help me speak colloquially. I also get the best listening comprehension practice, as they don’t hold back their talking speed. Whether it’s from playing charades or listening to a pep talk, I always leave that studio with my dance bag and a better grasp on Russian language.

From joining this dance studio, I’ve not only been able to keep up a passion halfway across the world, but I’ve also gotten a deeper insight into Russian culture. Since joining, I’ve gotten to hang out with more locals, perform on stage, and find a community where I can somewhat fit in. Oddly enough, this total immersion into Russian culture has highlighted both stark contrasts and jarring similarities between Russian and American culture. They often point out how ‘American’ I tend to be, smiling often and always answering ‘good’ to the question ‘How are you?’ But at the same time, when we start talking about famous dancers and dance competitions, I barely feel any cultural barrier between us. The day of our dance concert especially tore down a cultural wall for me, as it uncannily reminded me of performing in the U.S. The day could have taken place in America; we arrived early, helped each other with makeup, joked around, wished for a good concert holding hands, and cheered each other on. The very next class, however, I got to witness an interesting juxtaposition of the two cultures, as we had a tea party to celebrate our performance. We played Russian games, drank tea, and talked about the holidays, whereas in America, we’d have a similar party, but with soda and snacks instead of tea and cookies. It was awesome to see an icon of Russian culture blend seamlessly with one of my favorite traditions. 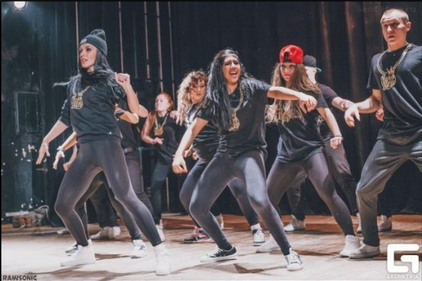