Spending Time With the Shabab (Locals)

Carlo participated in the 2011 Arabic Summer program in Egypt.

“Wallah azeem! Ezaykum ya hubiab entam wahashtani awi, awi, awi! Ezay al-dunya ma’akum? (Oh my God! How are you all, I miss you all so, so, so, so much! How is life?)” shouted my host brother, Mohammed, over the noisy traffic. He walked swiftly to greet Ahmed, Mazin, Abdullah, and Mustafa, extending his hands until he met the embrace of his friends. They all shook hands and kissed each other on the cheeks. It was a joyous moment of reunion. Finally, it was my turn to be introduced to the group as the American student studying Arabic. I noticed that all of his friends were surprised and I received a warm greeting from each one of them, especially Ahmed who said to me in English, “Wel-come, wel-come, wel-come to E-Gypt!”

I was definitely excited to meet them because it was my first time hanging out with my host brother’s friends. We were going to a place called Sharia’a Al-Mo’ez which was located in the historical district of Cairo. My brother wanted to introduce Egypt to me in the “shabab” way or the “local” way and so he could not think of a better way than to invite his friends to show me around.

As we made our way through the busy streets of Cairo, my brother and his friends were happily talking amongst themselves in Arabic. Even though I did not understand the majority of what was being said at the time, I enjoyed the feeling of being included as a part of the conversation and a part of the community. I listened as Ahmed and Mazin took turns telling funny stories to all of us and I laughed even when I did not understand the whole story. I liked the idea that I was a part of group of friends whom I had just met, but at the same time I felt as if I had already known them my whole life. 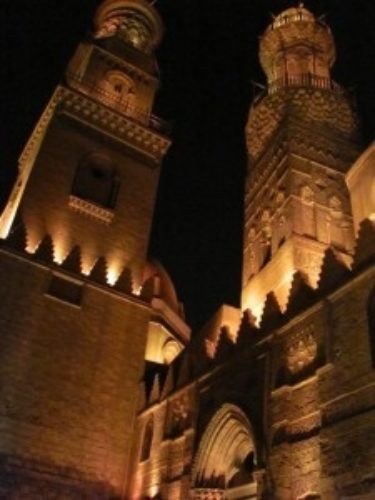 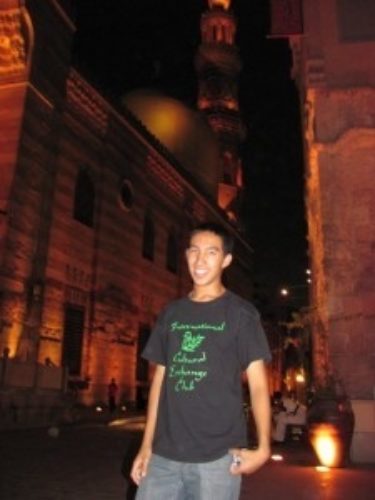 As we walked through the historic streets, Mohammed and Mazin took turns explaining to me what things were. I stared in awe as we passed by stunning architecture that was more beautiful than all of ancient monuments combined. Throughout the night, each of my new friends took turns teaching me vocabulary words or explaining the meaning of certain expressions. We sat together on the steps of an historic school and took a photo together.

The most exciting thing about that night was that I felt as if I were Egyptian or part of the Shabab ( Arabic for young Arab men), because I was doing what local Egyptians would normally do. I was hanging out with friends, telling funny stories and laughing, and really enjoying life. Most importantly, it was all in Arabic.