Kul Sharif, A Symbol of Tatarstan

It hasn’t even been a week since I arrived in Kazan, Russia, and already our group is making an excursion to one of the most well known sites in the city. As we enter the walls of Kazan’s Kremlin, I can’t help but be amazed. This thousand-year-old fortress, the only remaining citadel of the early Tatars, remains one of the most significant centers of Tatar culture in the Russian Republic of Tatarstan. Our resident director shows us various famous buildings, from the governor’s palace to a tiered-brick tower that leans sharply to one side. Even the entrance is impressive, tunneling through the base of a massive stone clock tower that overlooks the city below. Finally, we are shown through one of the complex’s inner walls, and we come to the building I have wanted to explore ever since I started researching Kazan months ago. Looking up, I gaze at the entrance of one to the most iconic structures in this small but important republic, a symbol of Tatar pride at the heart of the Russian Federation.

Like so many cities all over Russia, most of Kazan’s more well known attractions have some religious affiliation. When traveling the country, cathedrals and monasteries often top the list of historically and culturally significant places to visit. To an American traveler delving into the heart of the motherland in search of the authentic Russian experience, however, Kazan offers more than a few surprises. Here, Orthodox Christianity, a key element in the common Western image of a homogeneous, Slavic Russia, forms only half of a dual narrative, centuries in the telling. For the fifty percent of Kazan residents who identify as ethnically Tatar, “place of worship” does not mean “church,” but “mosque." In fact, in the Republic of Tatarstan, ethnicity and religious identity are one and the same. “Russian” is synonymous with “Orthodox”, while “Tatar” is always assumed to imply “Muslim." In a massive country where literally hundreds of ethnic groups reside in countless smaller regions, Islam has become a symbol of national pride for the people of Tatarstan, a foundation for their own identity among the Russian Federation’s 140 million people. 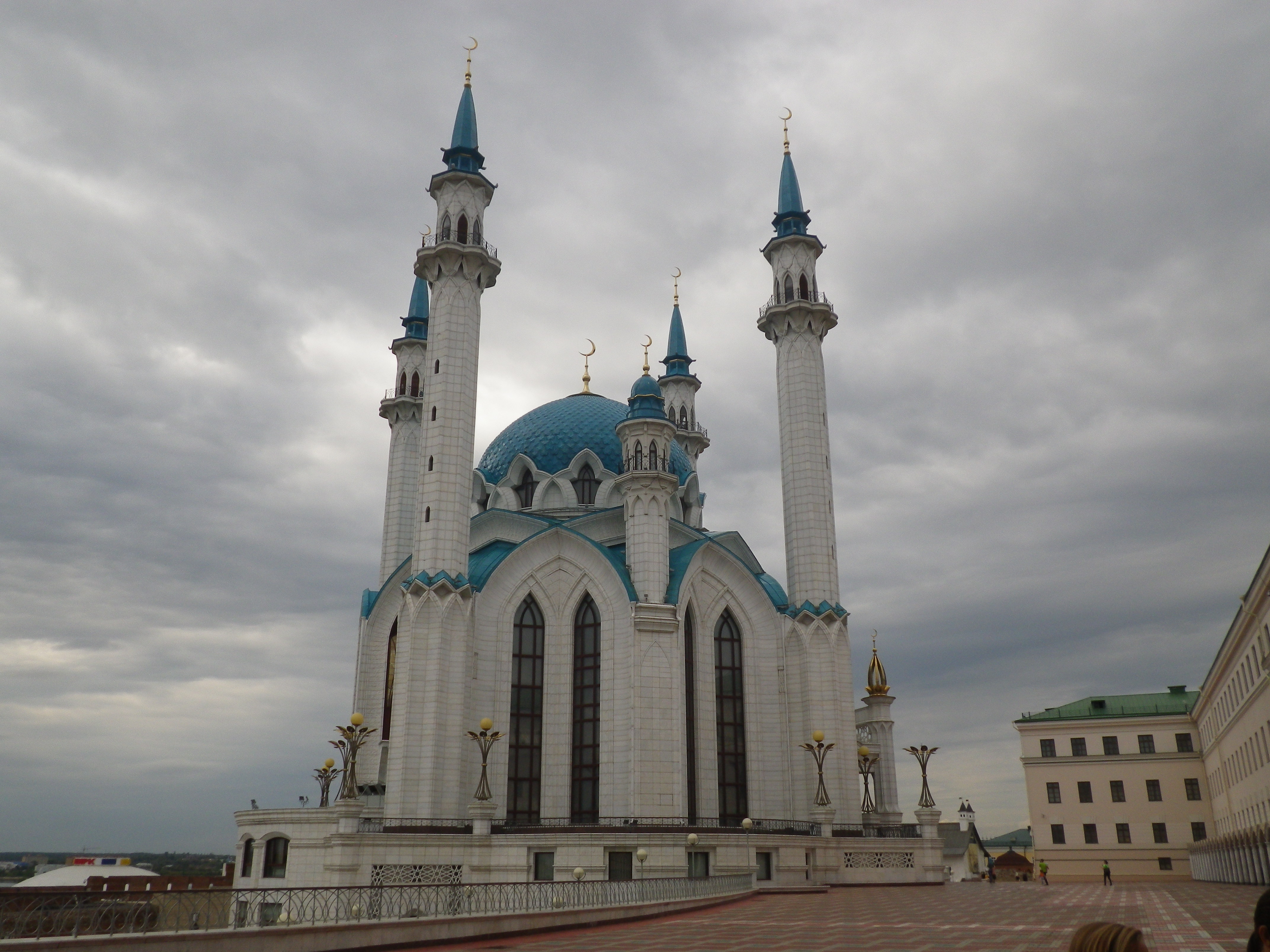 Nothing represents this identity better than Kazan’s Kul Sharif mosque, the centerpiece of the city Kremlin. As we approach the Kul Sharif’s humble wooden doorway, a quick glance up reveals stories of stone pillars and arches, stained glass windows, domes and minarets whose full visual impact cannot be justified on camera. Standing at fifty eight meters, this mammoth mosque dwarfs the Kremlin walls that guard it, and can be instantly identified from almost anywhere in the city simply by looking in the right direction. Just above the double doors, gold letters welcome visitors in four different languages. I don’t read Tatar, but beneath the main heading, I can easily make out “Kul Sharif mosque” in Russian, as well my native English. The inscription can also be read in Arabic in honor of the historical origins of Islam. 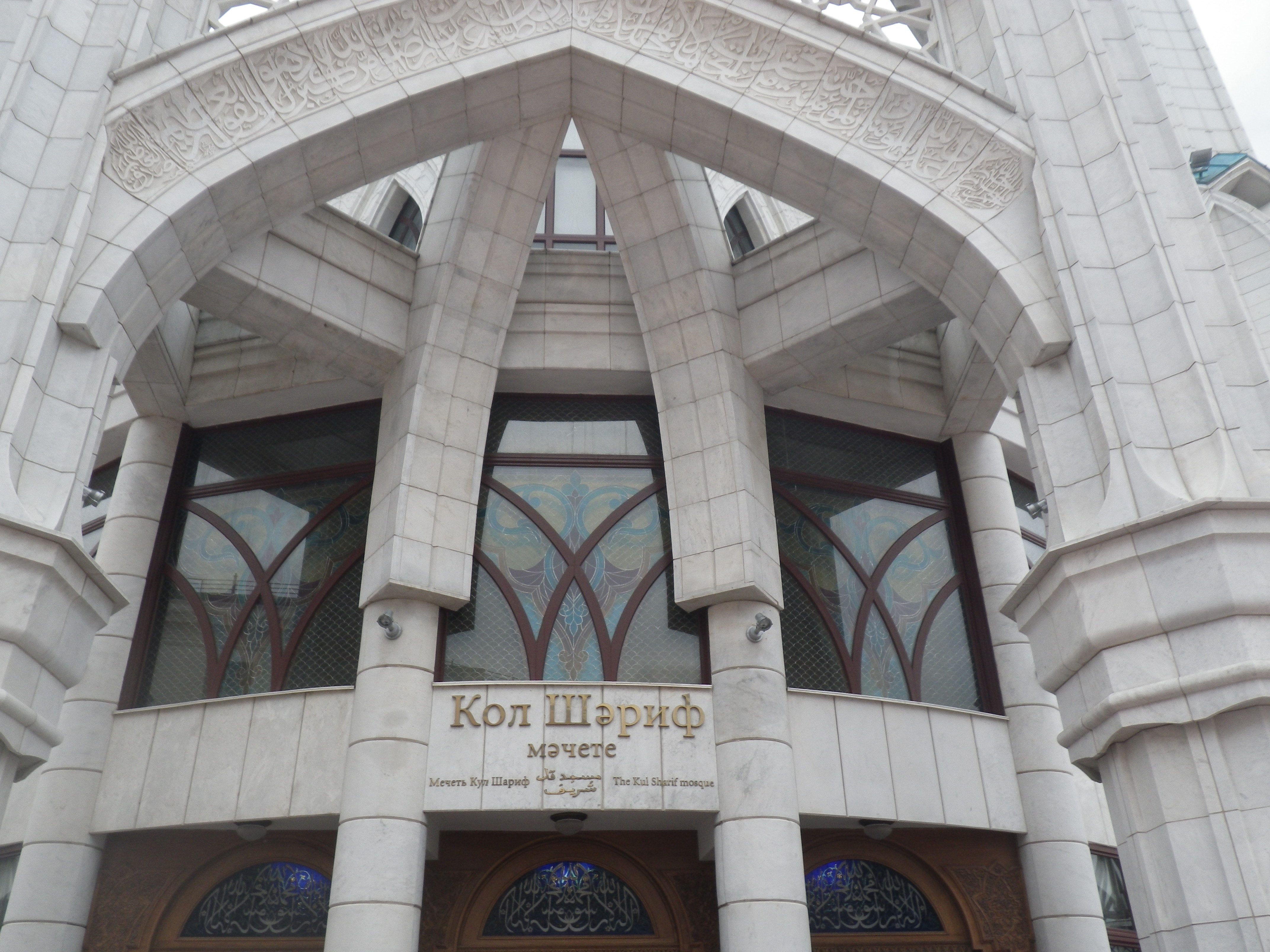 The mosque’s interior does my first impression every bit of justice. From the entrance floor, guests may either descend into the mosque’s museum of Islamic history, or ascend into the main place of worship, a cavernous prayer hall built to house thousands of devoted followers. Constructed in 2005, Kul Sharif is actually a modern addition to the Kazan skyline. The original Kul Sharif was built and destroyed in the 16th century. Even so, it’s hard not to feel a deep respect for the region’s heritage after leaving this architectural wonder. It’s even harder to believe that I will spend the next nine months within walking distance of Kul Sharif. I definitely plan on visiting again to remind myself exactly where it is I have been sent for my NSLI-Y experience.