The Cultural Explorers Project is a winter break project that gives NSLI-Y Korea students the opportunity to learn more about their interest in a specific cultural topic of Korea through group research and field trips. Each team has a Korean teammate who is not only also interested in the topic, but also has knowledge and experience in the subject. In this way, NSLI-Y students are able to learn about their topic in depth and get feedback from their Korean teammates. The project started in mid-January with study group meetings and wrapped up with excursion field trips. Each team gave a final presentation on their topic. Below are student reflections and final presentation videos. 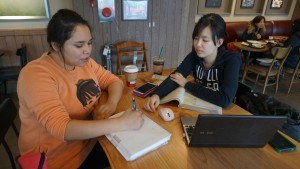 “I am researching Korean Literature and Language Arts with the help of a student majoring in English Literature and Language Arts at Ehwa Women’s University. I chose this topic, because my admiration for Korean was first sparked after hearing the recital of a beautifully, sad poem while watching a Korean movie, and ever since then, I’ve been fascinated with the simple, yet profound artistic style of Korean poetry and have also developed a curiosity for all forms of Korean literature, from classic novels to webtoons. However, for this particular project I decided to focus on poetry. 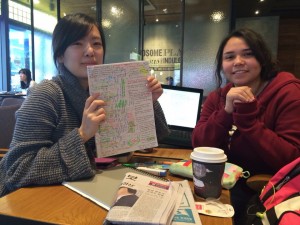 The entire process was really fun and interesting, because as my partner and I translated and analyzed our poetry pieces not only did we become close, but I learned many different ways to write better in both Korean and English. I also learned about Koreans' painful history through the words of popular Korean poets from time periods surrounding Japanese Imperialism, the Korean War, and South Korea’s movement toward democracy during the 1980s. I truly believe this project has helped me to understand and appreciate Korean culture better, and I can’t wait to share my presentation with all my friends and learn about their topics as well." - Miranda, NSLI-Y Korea, Academic Year 2014-2015 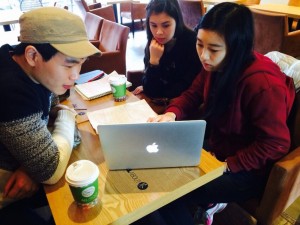 “While I love learning Korean, and languages in general, I have other interests as well, one of which is Economics. One of the reasons why I applied to NSLI-Y Korea, in fact, was to learn more about Korea's economic history. How did it become a global economic power in the span of a few short decades? What did Korea do differently from other countries flailing in the IMF Crisis? How did it recover so fast? These were questions that I carried with me from America, and I jumped at the opportunity to answer those questions with the Cultural Explorers project. While I was primarily interested in the economic side of the IMF crisis, my partner, Mailiis, was more interested in the cultural aspect of the IMF, so The IMF and What it Reveals About Korean Culture became our topic. 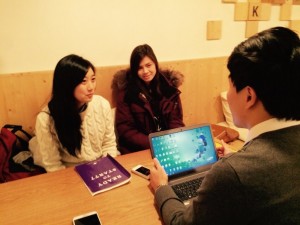 To understand the IMF, however, we had to first understand the basics of Macroeconomics, and since Economics can be quite complex, we had a lot of homework the first few meetings. We studied and researched by ourselves and discussed what we learned at the meetings. Through the research, discussions, and field trips, I have learned so much not only about Korea's economy but also about its culture. One of the most interesting things we learned during the project so far is also one of the things that helped Korea recover from the IMF crisis so quickly: 금모으기 (collecting gold). There is a deep love for the country, so much so that when the government asked for gold, people were willing to sell or even give gold to the government, and in the end 3.5 million Koreans donated $2.2 billion worth of gold! Both Mailiis and I couldn't imagine Americans doing the same in a similar situation. It is just so interesting how an economic event can reveal so much about Korea's culture because the two are not necessarily mutually inclusive, and through the Cultural Explorers project I feel like I now know not only more about Korea's economy but also Korea as a whole.” - Elaine, NSLI-Y Korea, Academic Year 2014-2015

Funeral Rituals in the Joseon Dynasty

“When I first found out about this project in November, I was really excited that I was going to be able to study something that interests me as much as Korean Confucianism, but I was also a little worried that the project could be uninteresting. I would wonder if the supporter I would be put with would have the same goals as I did, if the NSLI-Yian partner I would be put with would be on the same page as I was, etc. However, as soon as the project began, I realized that these worries were all in vain. Both my supporter and my partner, Brady, not only had the same goals and interests as I had, but also found our topic of Confucianism genuinely fascinating, just as I do. Throughout creating this project, though I believe we did end up with an amazing final project to show for our work, I think the greatest thing we achieved was simply the long discussion of Confucianism over our meetings. Confucianism is truly an aspect of Korean society and culture that is vital to understanding the nation of Korea. Accordingly, regardless of any other topic the other of the teams may have picked, or any aspect of Korean society, in all things related to Korea, there is inevitably a deep connection to the influence of Confucianism in Korea. Because of this, studying our topic, researching, and delving into the material was not only an easy task, but a fascinating one. Studying Korean Confucianism with my other teammates has been an incredible experience, as well an amazingly fun one.” - Mary, NSLI-Y Korea, Academic Year 2014-2015

Thoughts of a Student Soldier

“Through this project I learned a little bit more of my history and why Korea is shaped the way it is. It really showed me the hardships that Koreans went through as a people, and it help me understand things such as the current relationship and the way people feel individually about the U.S. I hope to expand my knowledge and learn as much as I can in the future because I feel like this is vital to the growth of Korea as a country and as a people.” - Matthew, NSLI-Y Korea, Academic Year 2014-2015