Korean Culture Through the Arts 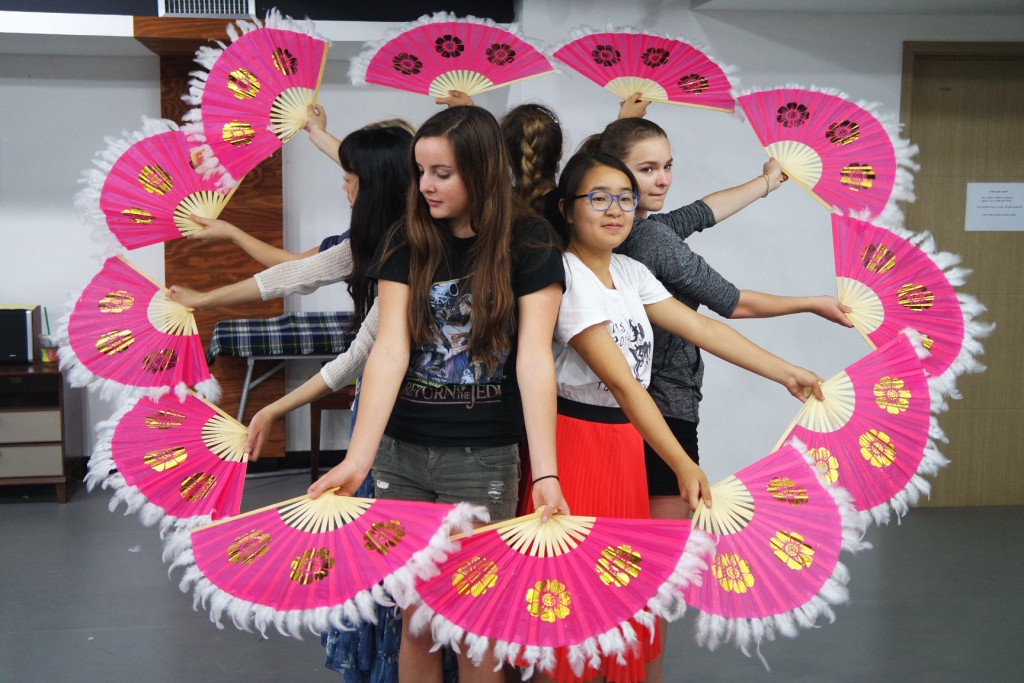 In the Traditional Korean Dance Club, the students learned the fan dance, which includes the use of two fans. Since the choreography is based on the natural environment, students had to work together to create flower, river, and rainbow shapes with their colorful fans. The first week they learned the basic steps of traditional dance and how to open and close the fans. From the second week, they learned to work as a group. Students Justin and Victoria reflect on the experience below:

“Traditional dance was a very interesting experience. I can't say that I've ever used props in choreography, nor have I ever moved so quickly to such a slow beat. The moves are all elegant and intricate; it was a challenge for everyone--even those of us who had experience in dance before. Flex ankles and don't point toes; fan facing in, no out, no in, I don't even know anymore; connect the fans and right over left... Or is that left over right... Which way is right?! Struggles aside, I think we all got to know a bit more about the ancient culture of Korea.” - Justin, NSLI-Y Korea, Summer 2015

“I am really enjoying the traditional dance class every Friday. It's been one of my favorite group activities so far, and I never find myself wondering what time it is out of boredom. The teacher is very nice and despite being much better than all of us she doesn't have an arrogant sort of aura about her. When we mess up, she politely corrects us but never makes anyone feel really on the spot, and I think that's really important in arts such as dance, which is so personal. I've noticed how the choreography taught in the class is a reflection of nature and as a part of this dance class I understand that we all must cooperate in order to accomplish our dances, just how nature's organisms, ecosystems, and cycles must cooperate together. I've realized that the natural world is an integral part of Korean culture and dance.” - Victoria, NSLI-Y Korea, Summer 2015 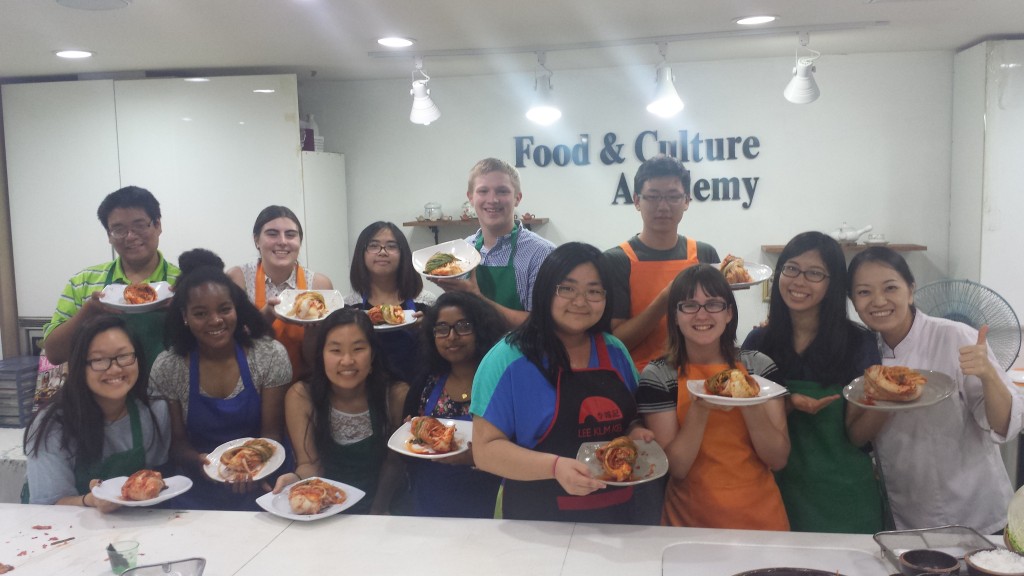 The Traditional Korean Cooking Club met weekly at the Food and Culture Academy in order to learn about the history and culture behind notable Korean dishes. Once they gained a deeper understanding the culinary background behind the dishes, the students dove into the kitchen to make the dishes themselves. On the first week, students made their very own kimchi, the most well-known and staple dish for Koreans. The students were able to happily take their kimchi home to their host families. On the second week, the cooking club learned about Korea’s long history of meat dishes, preparing their own bulgogi (fire meat) dish. Christina, Rehnuma and Zakiyyah share about their adventures in Korean cooking:

"Excited and enthusiastic to become Korean cuisine masters, our class started off with the most important aspect of Korean cooking - the 양념, or the key ingredients used to bring Korean dishes to life. Kimchi, made from Korean cabbage, pear juice, sugar, salted shrimp, kelp juice, and red pepper flakes, among other ingredients, is an essential dish to any Korean meal. We started off making the sauce, massaging all of the liquids and smaller solid ingredients into a past, later used to spread in between the salted cabbage leaves, giving the baby kimchi its signature flavor. Full of laughter and great photography by Gloria 선생님, NSLIY-ians displayed their vegetable cutting expertise and model poses. After wrapping the kimchi up once it was nice and stuffed full, the chefs in training were able to take the kimchi home to their host families, where we now wait for it to ferment (for about a week) to perfection." - Christina, NSLI-Y Korea, Summer 2015

"This week in cooking club, we took it up a notch and made 불고기. As usual, we went through a Powerpoint that contained not only the different types of 불고기, but the history and progression as well. After the lecture, we washed our hands and got ready for the demonstration. After that it was everybody for themselves. Haha. Just kidding. We followed along during the demonstration on what to put into the sauce. Unlike 김치, which we made last week, 불고기 is sweeter, so we put condiments like pineapple juice and sugar instead of fish sauce and pepper paste. After we cooked the meat, we ate our food to see how edible it was. Surprisingly it tasted amazing. Nobody complained about their dish being too sugary or too salty or having raw meat, so it all ended well. Looking forward to getting my hands on that cookbook and very excited to tackle our next meal, 잡채!" - Rehnuma, NSLI-Y Korea, Summer 2015

"Learning how to cook bulgogi was a fun and enriching experience. Before we actually began cooking ourselves, we were given a small lesson on the varieties of galbi Korea has to offer. This lesson actually helped me put a name to some dishes I had tried in my first week in Korea. Once we began cooking, we put ingredients that I never would've expected - pineapple juice, sugar, soy sauce, and garlic didn't seem like a great combination. But by the time we sat down to eat, my mind was changed and I thought, 'This is one of the best dishes I've ever made.'" - Zakiyyah, NSLI-Y Korea, Summer 2015 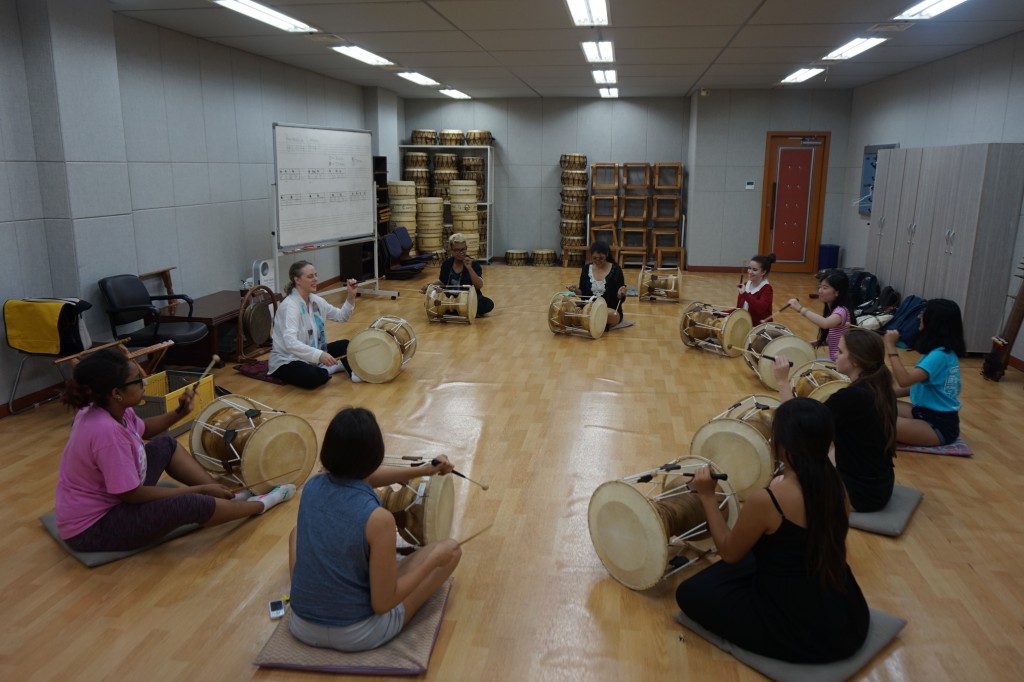 During the first Traditional Korean Music Club meeting, students learned about the Jang-gu, a drum-like instrument, how to properly hold the sticks, and how to sit while playing. Afterwards, they began learning two different rhythms and practiced them. Students remained very focused while learning, but also greatly enjoyed playing the Jang-gu. Anmei and Kendra discuss their experiences in traditional Korean music:

“I thought that the Jang-Gu class was really interesting and new. I felt that it was a little more complex and difficult than what I originally thought, which was nice (because I felt challenged). The teacher was really optimistic and encouraging. I was surprised but intrigued to find out that there was so much specialized Korean vocabulary for Jang-Gu playing. I think the first class did a good job of being challenging but manageable, so you would want to learn more.” - Anmei, NSLI-Y Korea, Summer 2015

“Although K-pop often comes to mind when most people think of Korean music, I think that traditional Korean instruments like the Jang-gu offer a fascinating, hands-on experience of Korean culture. I hope that learning how to play the Jang-gu this summer will allow me to not only gain a deeper understanding of Korean culture, but also share my appreciation for Korea's traditional music with those around me.” - Kendra, NSLI-Y Korea, Summer 2015 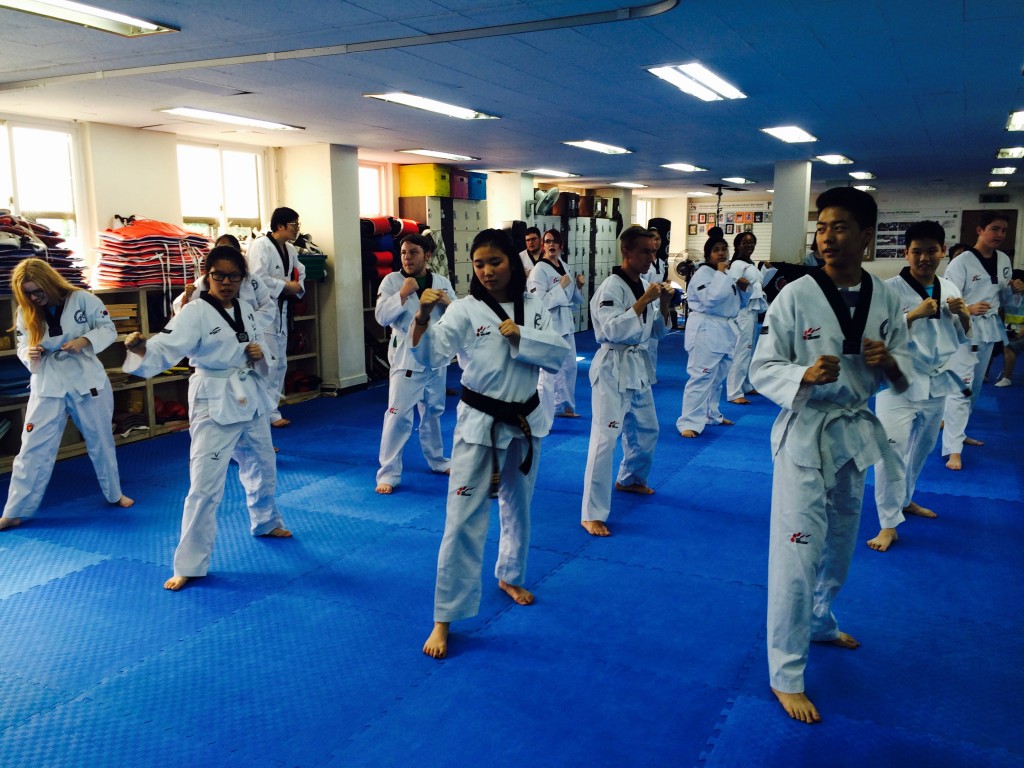 Taekwondo is a traditional Korean martial arts form with a heavy emphasis on kicking techniques. Many students did not have any prior experience with martial arts and were nervous for their first class. However, students quickly learned basic greetings and forms while getting a chance to integrate their use of Korean phrases and numbers. It was a challenging, yet invigorating time for the students, and they are looking forward to expanding their Taekwondo skills. Samantha reflects on the group's practice below:

“After the seventeen of us removed our shoes and socks and donned TaeKwonDo uniforms, the class began. The two sabonim (TaeKwonDo masters) who taught us were both very kind and friendly and spoke English very well. We learned how to greet each other before starting and also practiced yelling out (one by one), which they called “Ki-up." It was a little awkward for many of us to do this, but the action caused a chain reaction of unashamedness, which helped me get over any worries and embarrassment during the following exercises and tasks.

As we stretched and learned basic kicks and punches, we counted a lot, which gave many of us a good opportunity to practice the native Korean Numbers. The sabonims also taught us the words and names of each new thing we learned. I learned more than I expected, Taekwondo-wise and vocabulary-wise! I think that in classes to come, we will learn much more Taekwondo than I expected, though of course we cannot achieve proficiency in such a short time. For now, my main goal is to perform to the best of my ability in whatever activities we will do.

To conclude my reflection on this experience, I will affirm that I am very pleased with my choice of Culture Club Activity! All us of had a wonderful time. My fellow student and friend, Bilqees, stated: “It [TaeKwonDo] was a really unique bonding experience with the other students and I believe that it has given me a better understanding of South Korean culture." - Sam, NSLI-Y Korea, Summer 2015