Seeing China Through A New Lens

Excerpts from an interview with alumnus Austin, NSLI-Y China, Summer 2015

As a high school junior in New Jersey, Austin had never studied Chinese –only Spanish—and had never traveled abroad. “In the beginning, I really wanted to learn Japanese…but then TeenSHARP told me about [NSLI-Y].” (TeenSHARP is a youth leadership program for under-represented students in higher education, in which Austin participated and now volunteers.) Austin finally decided to apply after knowing about the program for two years. His mother was hesitant at first, but TeenSHARP mentors talked with her; she eventually agreed that Austin’s participation in NSLI-Y would be a positive experience.

With his NSLI-Y departure two days after school ended, preparing for the program was a challenge. This NSLI-Y experience was Austin’s first trip outside the U.S. and he had to prepare during his final exam period. Austin notes that he owes his preparedness for the program to his family. “My family helped the most … they would pick up things that were on my NSLI-Y packing list.”

Once abroad, Austin was surprised by the food and the stuffed bamboo beds. “The very first day [in China] was really tough. There were so many new things at once… there were no breaks … there was no American safe haven to go to; everywhere was China. […]I was really scared. I thought, ‘If the food’s like this every day, there’s no way I’m going to make it. But, things got better. You get used to the taste. I really love Chinese food now.” There was one Chinese custom for which Austin was well-prepared: using chopsticks; he had practiced for three months before departure! Needless to say, his host family was impressed. “I just had to adapt to things you’re not used to [… ] like the beds.” 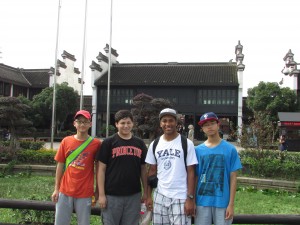 Some expected hardships never came to fruition for Austin. Before traveling to China, “[many people said] since I’m an African American, people would touch my skin, touch my hair; people would be so intrigued. But that never happened to me. Apparently there are a lot of Chinese people with skin [like mine], so I wasn’t as incredible as people said I would be.”

He advises future NSLI-Y students “not to spend too much time with other Americans on program. We had a great time together, but I would advise not to spend too much time with them because you’re there [to be in] China and can miss out on other things.” Although Austin found his Chinese class very intensive and difficult without much use of English, he found this provided a strong foundation and impacted his language acquisition the most. In the beginning, Austin did everything he could to communicate – from charades and gestures, to using translations. “Toward the end, I felt a lot more confident speaking, like by the dinner table or in the taxi cab.”

One piece of advice that Austin received during his pre-departure orientation and which stuck with him was to “Take your sunglasses off. When you go to another country, it’s like you have green sunglasses on. That’s your view from America; everything you’re seeing is different; it’s not what it actually is. Take off your sunglasses when you travel; see things for what they actually are. In the beginning, I always compared everything to home – ‘Oh this bed’s a lot harder; this food’s a lot blander,’ but I tried to stop comparing. I didn’t message my friends; I had no connections on social media. I wanted to completely focus on China and have my sunglasses off.”

The pinnacle of Austin’s NSLI-Y experience was near the end of the program when his host family drove six hours to Yellow Mountain, a famous mountain in China. With his host mother, 14 year-old host brother, and their Chinese friends, “We spent the whole day climbing it. We got to the very top, took pictures, and ate lunch. It was a lot of fun; that was life-changing.” 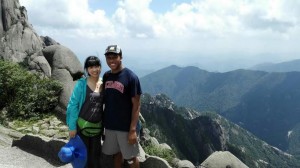 Below Right: Austin and his host mother at Yellow Mountain, a UNESCO World Heritage Site

Austin is thinking of studying international relations in college, with a concentration in Chinese or Asian Studies, and with a goal of becoming a Foreign Service Officer. In the meantime, he is back home, involved again with Boy Scouts and TeenSHARP, but will continue to share his NSLI-Y experience by promoting the program within his community and among students with similar backgrounds to himself. “I’m going to campaign for it at TeenSHARP and hopefully at my school; I really want more people to apply for it.”