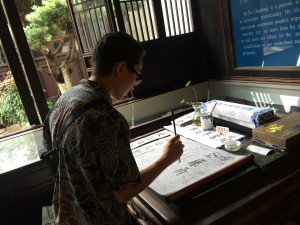 Seth has had a deep interest in the Chinese language and culture for a long time, to a degree he says was unique in his high school. It was in his freshman year that he learned about NSLI-Y from his Chinese teacher, and he knew that it was something he wanted to do. However, he decided he would wait until his junior year to apply so that he would have more experience with the language. Fortunately, his family—including his twin brother—was very supportive of his participation in NSLI-Y.

What attracted Seth most to NSLI-Y was that it was a full scholarship that provided an immersive experience in the Chinese language and culture, allowing him to do and learn things beyond what a classroom could offer. He had previously studied abroad in Germany, which he feels helped prepare him to take full advantage of his experience in China.

Once in China, he realized how much there was to learn. He says, “The conversations we had [with our host family] were all in Chinese from the beginning, but it was difficult to understand what we were supposed to do, or what the other person was trying to get across.” But the constant practice provided by such an immersive experience quickly began to pay off. He says that eventually, “I didn’t need to know everything that was being said because I had gained enough in communication skills to get the main idea. By the end, I was able to say exactly what I wanted to say, quickly and on demand, in conversations and interactions with people in public. I learned to react to the language with the language.”

Seth’s positive attitude helped him work through some of the difficulties or cultural misunderstandings he came across. What others might have seen as challenges, Seth viewed as teaching and learning experiences.

I listened to what Chinese people thought about America and then explained what I thought was a more accurate depiction of America. Although there were stereotypes among the Chinese, I found they were all interested in knowing what we had to say about America. I would introduce a topic, such as our president and ask them what they thought; then I’d say what people in America thought. Then we’d talk about the Chinese system.”

The moments he cherished most were those spent “[…]with Chinese students my own age,” he says. “I made one friend with whom I still keep in contact. The most enjoyable part of the process was to explore her culture and talk to her about what it’s like to live and go to school in China. I explained what it’s like to live in America and shared my own culture. Forming that connection to learn about China and share about America was really interesting.” 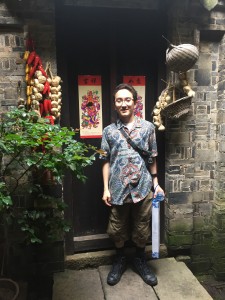 One prior misconception Seth had about the Chinese was “[…]that every single one of them was industrious and hard-working and that as Americans we might feel intimidated or not as academically successful. However, what I found was that a lot of the school materials, despite being taught differently were comparable and that us Americans were just as academically successful as any Chinese. […] My host family even told their son to ‘study like Seth.’”

Seth worked hard. “I would write down my vocabulary in three columns – characters, pinyin (pronunciation), and meaning. I’d sit down with my notebook, write the characters several times until I understood how to write it, pronounce it, and then say it in a sentence.” In talking with Chinese friends, he found that many children in China learn the language by a similar method.

He also found a way to use his curiosity about the language as a way to build relationships.

Seth offers the following advice to those preparing for the NSLI-Y experience: “It’s really important to be prepared to work a lot during the program. I took advantage of the point of the program to immerse myself in the language and improve my own skills, in addition to going out and exploring the culture. Each night after dinner, I would study for two, three, four hours more – it was the best way to get the most out of the experience.” He still found time to get out and explore, but often studied in the evening.

He goes on to say,

Be prepared for a challenge. Be willing to explore what is unknown – culturally, with the language, with the people. I found all the people I interacted with were just as interested in speaking with me as I was with them. Take advantage of those opportunities, where ever they arise: in the classroom, with teachers, with other students, or on the street with just someone you come across.”

Seth demonstrated this while walking with friends though a park in Shanghai. “We came across some musicians playing traditional Chinese music. Being a violinist, I said in Chinese, ‘I play violin,’ and one of them – an older man – gave me his instrument and told me to play. And so, I played a little of what I had in my mind—some Western music. Then they asked me to play some Chinese music. So I came up with Chinese [style] music based on what I’d heard. It was difficult… but it was really fun and I’ll remember it for a long time.”

Seth also acknowledges the impact NSLI-Y had on his academic and professional plans.

It shifted my interests in terms of academics. Before I went, I was interested in being a professor. However, I never had a specific subject [of expertise in mind]. I took my experience learning Chinese as just something to study and [a means to] a good paying job. […] Being in China and the importance of being able to communicate with a whole nation on the other side of the world with over a billion people really struck me as something important to do. Coming back, I was pushed in that direction, towards being an individual who can help others in our country connect to another culture and understand what qualities it has that will enable us to trade better, to understand where they are politically, how we’ll react to them and how they’ll react to us, based on their history and their culture.”

Seth is a high school senior at a suburban Chicago high school, where he continues to study Chinese through an independent study. He plays violin and helps new students get accustomed to his high school. He’s also involved in Scholastic Bowl and Mathematics Team among other activities. After graduation, he will begin a degree in East Asian Studies at Princeton University.
Previous Article Next Article