Three Things Morocco Has Taught Me (Besides Arabic)

It’s almost been a year since I left for Morocco with NSLI-Y. In that timespan I’ve been able to evaluate my experiences and recontextualize them into a broader picture. In that very same timespan I’ve also successfully pushed off and procrastinated on compiling all the footage I shot while over there until just recently.

Being a glass half full kind of a person, I’d like to see my disregard for deadlines as a blessing in disguise, as I got the opportunity to relive the moments I captured on my camera during the video editing process. I did not have to be reminded of everything that I experienced in Morocco; everyday moments I experienced somehow stuck with me even if they seemed small and insignificant at the time or weren’t caught on camera.

It was these mental snapshots that gave me the most insight and taught me the most while I was there. My experience is not universal, in fact it’s far from it, but I hope that it will provide you with as much insight as it did for me.

1. Consume with Your Conscience

Every travel guide you read about Morocco will tell you about the concept of bargaining and how “intense” it is in Morocco. These guides will teach you how to get things for a steal, and maybe even provide you with the necessary vocabulary to do so. Reading all of this, I wouldn’t be surprised if every traveller going to Morocco starts off with the hard-headed mindset that they will be in an economic face-off with every shopkeeper they’ll encounter. Most of the “frustration” that comes with bargaining isn’t that the shopkeeper doesn’t lower the price, but that the shopkeeper doesn’t lower the price enough. 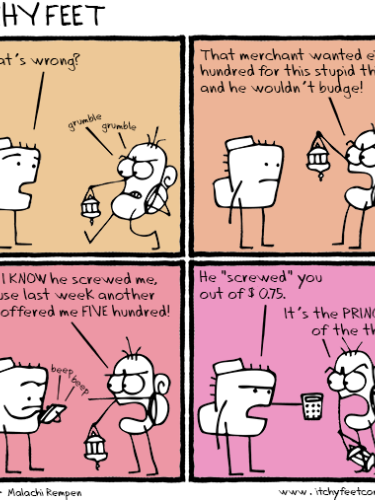 There are a couple realities you will have to keep in mind if you ever feel this frustration in Morocco. These realities extend beyond the fact that not everything is up for bargain and many items genuinely have fixed prices. The first reality to keep in mind is that anything that is not imported is cheaper in Morocco than back home, the second reality is that you will ALWAYS pay more than the average Moroccan for no other reason than the fact that you are a foreigner, and the third reality is that not everyone is trying to cheat you for every dirham you are worth. Bargaining culture in Morocco comes with an asterisk and is not as blunt as travel guides make it seem, it’s more of a negotiated cooperation between two parties than an all out price war.

Besides imported goods, basically anything you’d want to buy as a souvenir is significantly cheaper than it would be if you bought the same item in the States. Keeping this in mind, that same item is probably still cheaper in Morocco with the added “foreigner’s tax” than it would be in the U.S. This means that no matter how much of an “up-mark” you receive, you are still getting these items relatively cheap.

All this consideration of price, however, shouldn’t distract you from the fact that you are negotiating with a human being. Being disrespectful, rude, irrational, or ignorant of what constitutes an appropriate price will not get you anywhere. An important thing you should honestly consider and keep in mind is whether or not the couple of dirhams you are haggling about is really worth it. Don’t get caught up in the “injustice” that you are paying more simply for being a foreigner. Remember that while these couple of dirhams won’t impact your standard of living, they might impact the shopkeeper’s. Be a smart consumer, you should obviously negotiate when you are clearly being ripped off, but you should also take a step back and evaluate whether the price, or item, is really worth it. Bargaining is a great way to practice your language skills and make friends, not enemies.

2. Keep an Open Mind (and an Open Stomach)

Moroccan cuisine is diverse and varied. A traditional chicken stewed with turmeric and fenugreek might come served with french fries and pâté. A smoothie of bananas, pears, almonds, dates, raisins, sesame seeds, and buttermilk was a staple at my dinners with my host family. The quantity of food placed in front of me during my first night with my host family along with the amount I was expected to consume is almost comical. You will soon discover, though, that the amount of food offered to you is proportional to the amount of affection and generosity the people have around you. The initially bizarre combinations of foods set before you (a savory beef and apple tagine, for instance) will become culinary delights that make you feel as if you are an intrepid foodie pioneer discovering the latest food trend.

I found that the open mind I kept towards my food translated into an open mind I kept during the daily after dinner conversations, when everyone is trying to digest the ridiculous amount of food they just ate. Religion was a favorite topic of my host uncle, while current events and politics were preferred by my host grandfather. The unspoken convention of avoiding politics or religion over the dinner table that we have in the States went out the window during my stay in Morocco, much like the untold convention that would argue against the creation of a sardine tart––but alas this wasn’t home, and things were different here.

When I was younger I was told that “we have one mouth and two ears for a reason, we should listen twice as much as we speak”. This was something that I stuck to at my Moroccan dinner table. I may have not agreed with every opinion presented, every point discussed, or every idea debated but I will 100% guarantee that I gained more from listening and observing at the table than going into a head-to-head crusade of ideologies with my host family. Morocco taught me that you have more to learn from understanding why people believe what they believe, than trying to convince them why they should believe what you believe.

3. Everything Is About Perspective

We all develop our world views from the influences in our lives and what may seem obviously taboo to us might seem acceptable to others. This is a two-way street that goes both ways. Morocco, while being linguistically, racially, and geographically diverse, is a nation that is fairly religiously homogenous, being almost 99% Sunni Muslim, and doesn’t have a lot of experience interacting with foreigners outside of those from Europe and the rest of Africa. These influences that affect the world views of some Moroccans had a big impact on my experience there.

As I am not an adherent to an Abrahamic faith, people around me would constantly ask about my beliefs. One of my host uncles often asked me about my faith (or lack thereof), 50% out of a curiosity on how I am not a follower of Islam and 50% out of a genuine attempt to convert me. I learned to see this as a product of lack of exposure to other religious groups. I took no personal offense to his questioning my spirituality.

This awareness of differing perspectives is also essential to keep in mind when confronted with issues where the other party doesn’t have such benevolent intent. As an Chinese-American my race was often the cause of a lot of intrigue in Morocco. I often used this as a starting point for many conversations; "No, I am not Japanese", "I’m actually from the US", "Well my parents were born in China". These instances were opportunities for dialogue, but sometimes that opportunity didn’t present itself. More than once, groups of bored youth hollered “Chinoui, Chinoui” (Moroccan Arabic for Chinese) or “Jackie Chan!” and motioned faux karate at me. The topic of race is highly sensitive in American culture compared to other parts of the world with many unspoken, almost universally accepted, taboos.

Was I angry at the hooligans who would yell “GANGNAM STYLE!” at me? Of course, but again, they weren’t aware of how severe of a taboo they were committing. The amount of frustration I felt to them would have seemed disproportionate. It was through this that I realized how much exposure to varied portrayals of different groups of people have changed my worldview and what I consider right or wrong.

I don’t let these instances color my experience in Morocco as a whole, my host uncle was one of the most generous and patient persons I have had the pleasure of meeting and the hooligans that hollered at me were not worth letting myself get too worked up about. There is no point at getting annoyed or angry, such emotions will only cause you to lose. Through recognizing different perspectives and where they come from, why they exist, you have everything to gain.

In the end the lessons I learned all boil down to understanding and awareness. I built a wider world view while in Morocco by trying to understand everyone else’s. Being placed somewhere new is the opportunity to see things from the outside looking in, it allows you to compare and contrast differences in the way you live and in the way others live. Everyone has a reason for doing what they do. When you realize that, then you can truly start to understand what is going on around you.

Eric Deng was a NSLI-Y participant in the 2015 Morocco Summer program.