A Snapshot of a Day in Indian High School

About half of the NSLI-Y summer students…are attending Emerald Heights International School, a remarkable institution servicing around 4,000 students, both boarders and commuters. There are 52 busses that bring in children from the reaches of sprawling Indore, and the rest just walk from their dorms across campus. The campus is beautifully maintained by many colorfully decked out staff members, and right now, red and white flowers of incredible fragrance line the paths. There are basketball courts in the central region, and rumor has it that we international students may actually join sports, which would be great, as extracurricular exercise outside of school sanctioned activities is not given much priority here. 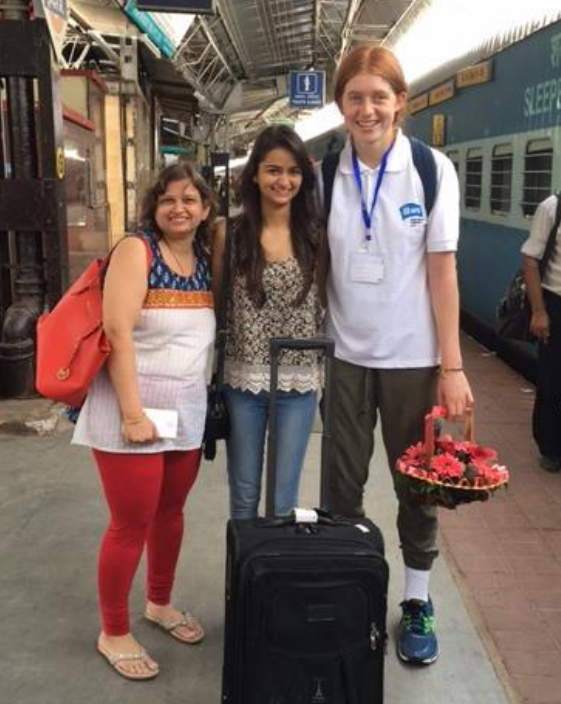 Lucy with her host family.

Every morning, my 14-year-old host sister and I board our bus at 7:00 am. Unlike commonly in the U.S.A., there is communication between the families and the bus drivers, and the bus may even wait for up to 5 minutes if the student in question is rushing late. We rocket through the streets, mostly populated by the multitudinous busses at that time of day, with the bus wallah leaning out the door and calling to his colleagues on the other busses. About 17 minutes later, we arrive at school and disembark into the sea of blue-uniformed children.

The American exchange students are all in one class together. We begin the day with what is a very light yoga lesson, according to the teacher, but which strains our joints into totally unfamiliar and uncomfortable positions much of the time. I do feel gradual improvement, though, which is satisfying.

In school, the teachers are venerated, and it is not uncommon for the छात्रों to greet them with “Good morning, Ma’am!” Or “Good morning, Sir!” And even touch their feet in respect. The teacher’s words are not totally up for debate, but often students feel that some material is incorrect, and covertly plan and then subtly challenge the teacher. Most of the teachers are female, and wear beautiful saris or salwar suits, while the men are commonly clothed in western business wear. The grounds staff, mostly comprised of poorer women, are no less colorfully and nicely dressed, though they do not command the same respect from most of the students. One woman was very surprised when I greeted her with “Good morning, Ma’am!”

Overall, the school is amazing, and is made into a sort of study haven for the students where all is academically oriented. It is, through this attention, very conducive to success, especially as the population is very pleasantly driven. I think a merger between the fostering of this Indian focus and the vital American curiosity with supplemental extracurriculars would make an ideal school system.

Lucy was a participant in the 2016 NSLI-Y Hindi summer program.