Jordan “Bliss” Perry initially applied to NSLI-Y in 2016 to study Turkish; however, when the Turkish programs were temporarily suspended, he was offered the opportunity to study another language. He chose to study Hindi because he saw it as the most challenging for him. He had also been dedicated to studying Latin and Greek and the Western classics, and his teachers had recommended that he someday study Sanskrit. He saw studying Hindi as a step in that direction.

One thing Bliss cherishes from his experience in India is his host family. There were 12 people in his host family, which he feels gave him a broad exposure to Indian culture. “There were the grandparents who couldn’t speak English, the four-year old child, the teens going through exams, the father who owned restaurants around the town. There were just so many different people in the family that I feel like I got maximum exposure to the Indian culture.” 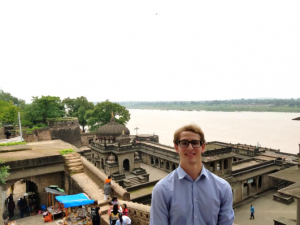 Bliss also enjoyed participating in a Model UN conference held at his host school in Indore. Because one of his host brothers was a committee chairperson, he was able to attend the entire conference. He spent the majority of his time with the cybersecurity chamber, which included delegates primarily representing the US, Russia, China, India, Japan, many E.U. states, and others. Two of the major topics of discussion were Russia’s alleged role in a cyber-attack on Estonia and China’s role in cyber warfare. He found it fascinating to observe discussions on global issues such as cyber security from an Indian perspective. At the conference, he was also able to meet talented students from all over the city and to deepen his relationship with his host brother.

Of the experience, Bliss shared: “Even more valuable than observing Indian foreign policy opinion […] was the opportunity to experience firsthand the final product of the famously rigorous Indian education system: intelligent, dedicated, and outgoing teens fully engaged in their discussion and aware of the world.” Bliss says, “[The experience in India with NSLI-Y] really opened my eyes to the way India fits into the larger global picture and is poised to make a difference in the next fifty years.” He hopes to continue to engage with India and to follow its involvement on the world stage. 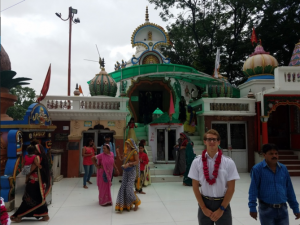 To keep up his Hindi, he stays in touch with his host family and friends in India and watches Bollywood movies. NSLI-Y has also bolstered his interest in language study, and he has dedicated himself even more to his studies of Latin, Greek, and Italian. Recently, he achieved a gold medal on the National Latin Exam and the highest level on the National Greek Exam.

Bliss hails from New York City and will be attending Harvard in the fall. He plans to study linguistics and classics, as well as Hindi and Urdu and hopes to eventually pursue Sanskrit.