It's the Little Things that Really Matter 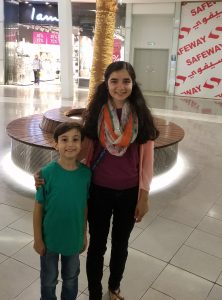 Shraddha with her host brother, Osama, both smiling and standing side by side.

I was packing my bag for school when I heard a knock on my door and a shy voice calling out my name. As I stepped out, I saw Osama, my little host brother standing outside the room. In his hand, he held a broken hair tie. I remember my hair tie breaking the day before, but I wasn’t sure where it had fallen. With the snapped rubber in hand, he explained to me in Arabic that he had tried to fix it, but he didn’t know how. “Ma baarif,” he sighed, seeming disappointed in himself. When I took the hair tie, I noticed the black duct tape on one end; the little boy really made an attempt to attach the two ends together. As I pointed and asked him if he had put the tape there, he smiled shyly. Then, taking the two ends, he motioned for me to tie them together. I was so touched by the six year-old boy’s gesture. His earnest effort to make me happy even in the smallest of ways was so sweet.

A little while back, exhausted after a week of school and nighttime activities, I unintentionally fell asleep in the drowsy heat of an evening bus ride, phone at my side. As the bus pulled into our street I stepped out sleepily, still groggy because of my nap. When I reached my room, it occurred to me that my phone was nowhere to be seen. I tried to call it, but realized that I had left it on the bus. I panicked as the weekend was upon us, and I thought I wouldn’t get my phone for another two days. However, within half an hour, the driver arrived, phone in hand, despite the intense weekend traffic in Amman, or the fact that he had already reached his own home when I had called. 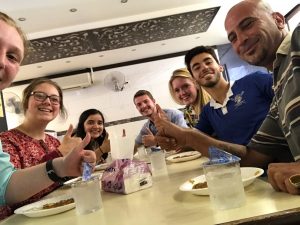 Shraddha and NSLI-Y students with Bilal, smiling at the camera with their kunafah

Just to give you some background on our driver, his name is Bilal, but we refer to him as Vin Diesel, because of the fact that he’s “Fast and Furious”. We used to think of him as tough and intimidating, but he turned out to be extremely open-hearted. Every morning for the past week or so, instead of just buying his coffee at his daily pit stop, he takes time to buy us little Jordanian cakes and juice for the day. The other day, he took us out to try the Jordanian pastry, kunafah, and the past few days, has treated us to ice cream as well! He calls us friends and treats us like royalty.

When I first moved in with my host family, my host mother told me that if I ever felt homesick, I should come to her. During the first few days, I couldn’t anticipate any adjustment issues, and the thought that I would miss my American life didn’t seem possible. However, after a few days, I did start missing my family and my home. I talked to my host mom about it, and she hugged me and called me “Habibti” (darling) and told me that here, I should not miss “Mama”; she was my “Mama” and that for the next few weeks this was my home. 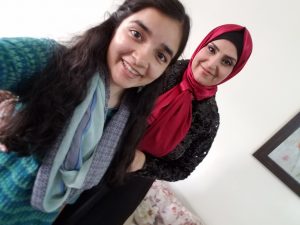 Shraddha, standing in the foreground, with her host mother, who "treated me like her own daughter"

I am so thankful for everything my host family has done to help me adjust to this new country and environment, and make me feel welcome and truly a part of their home.

There is something in the hearts of the people here that I haven’t seen before. It’s a sort of limitless open-heartedness; the will to give without expecting anything in return. My stay is halfway over. Three weeks from now, I will be back to my life in the US, and this will all be part of the past. In these few weeks, I have received so much hospitality and welcome from the people here in Jordan, and already I know I am going to miss it. There is so much to Jordan: the colorful culture, the flavorful food, the vibrant streets but what really speaks out to me the most is the kindness of the people who live in it.