Kate is an alumna of the 2017 Hindi summer program in Indore, India. She is originally from Big Sky, Montana. 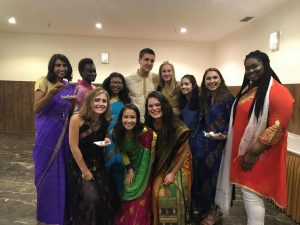 My host mom calls from downstairs, using a common Hindi word meaning, “let’s go”. I grab my bag and run down the stairs. Knowing that we could be going anywhere, I have learned to always have a bag prepared with my raincoat (it’s monsoon season), a few hundred rupees (although my host parents never allow me to pay), my small notebook (filled with Hindi vocabulary), and a shawl to cover my shoulders. It was my second week of living in Indore, India this past summer on a U.S. State Department merit-based scholarship called the National Security Language Initiative for Youth (NSLI-Y), and India was already feeling like home.

During my six weeks in India, I lived with a loving host family, including my two host brothers, numerous cousins, aunts, uncles, and grandparents. My host family embraced me as one of their own and showed me the beauty of Indian culture. They took me to temples and street markets, Bollywood movies, cake shops, and even McDonalds or Subway (when I was feeling homesick). I learned Indian dances at enormous family celebrations, and how to cook traditional meals from my host mom and grandma, as well as our cook, Lakshmiji. Six days a week, I went to school, where I studied Hindi at the Daly College, on a traditional Indian boarding school campus. There I met Indian peers who welcomed the exchange students and offered tips about how to sneak another cookie at our daily “chai break” or the best place to hang out before class. After school, I came home to a delicious Indian snack and my favorite part of the day, chai and chapati with my host mom. She taught me many lessons, from how to get through a crowded Indian street market and make all different kinds of Indian traditional foods, to how to relax into the ever-changing schedule so typical in Indian culture, or as she called it “flow with the flow”.

My host mom also helped me practice my Hindi--the main goal of my scholarship--by taking me out for practical experiences. Cab drivers and shopkeepers were always surprised when I spoke and would respond quickly with eager enthusiasm, asking in Hindi if I could speak. When I said “thoda thoda” (just a little) they would smile and ask me more questions, testing if I, an American, could actually understand them. Throughout my time in India, I believe being able to speak Hindi made my reputation—or rather, their perception of me as an American—better. And that was a big part of what I really wanted to achieve.

The U.S. government had sent me, and 23 other Americans, to India as “youth ambassadors”, a position that was re-emphasized in my three days of orientation in New York. And from the moment we landed, it was absolutely clear to everyone that I was American. From my skin color to my thick accent, there was no hiding this fact. Because Indore--a city of about two million in central India-- is completely off the tourist track, seeing any non-Indian was not normal. When I walked down the street, men, women, and children would stare at me, people on motorcycles would spin their heads around and follow me with their eyes as they sped by, and it was hard to go to the grocery store without being asked for a selfie.

For the first few weeks, I struggled with the massive differences that come with being immersed in another country. There were personal contrasts: I had left one of the least populated states in North America to travel to the second most populated country in the world. I went from cool and dry to hot and humid, from a place where I had always been local, to one where I was unalterably foreign. There were also all the obvious shallow societal differences from the cuisine, clothing, music, language, and celebrations, to the stray animals including dogs, cows, pigs, and camels, as well as the traffic that seemed to have no rules. Finally, there were the deeper cultural variations that lay under the surface and were considered relatively unspoken, such as underlying school and familial structures, concepts of time, notions of modesty, and roles in relation to age, sex, and class.

But that’s why I chose to go to India when I applied: I was in search of something 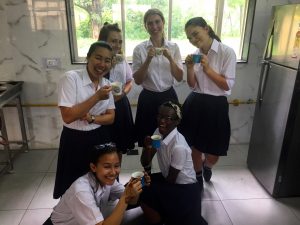 truly unlike my hometown—and I found it. By the end of the program I had a much deeper understanding of why and how these differences existed, and while some were still difficult to accept, my approach to thinking about them had definitely changed.

To me, studying abroad not only meant learning about another culture but also learning a lot about myself, my culture, and my country. Because of NSLI-Y, I stepped outside of my comfort zone, I developed perseverance, and I became a part of a wonderful family.