Mira is from Norman, Oklahoma and participated in the 2017 Tajikistan summer program. 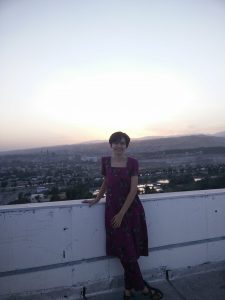 When I found out I had made it into the NSLI-Y Tajikistan program, I was in the middle of reading a line during a rehearsal for a play. The script was on my iPad and when I saw the notification, I cut my line short, opened my email, read the acceptance, and began jumping up and down. The people around me were confused because both interrupting rehearsal and jumping up and down where uncharacteristic behaviors, but I couldn’t help myself - I was just that excited.

Going to Tajikistan had been a dream of mine for about a year. I was fascinated by Middle Eastern and Central Asian culture and Persian seemed to be the perfect door into both. However soon my feelings of excitement began to mix with a little nervousness. I knew NSLI-Y was an intense academic program. I wasn’t sure if I was going to be up to challenge. I didn’t speak a word of Tajiki, how was I going to communicate with my host family? Little did I know that NSLI-Y would be a life-changing and motivating experience and, though I would certainly be faced with challenges, I had nothing to worry about. In this article, I have detailed my day-to-day routine while in Tajikistan, hoping that it will provide comfort and clarity to a prospective NSLI-Y applicant or admitted student, or just that it will inform someone a little more about this amazing program.

Every day, at six in the morning, my alarm would go off and I would get up and immediately start to study. Normally my early morning studying would involve going over vocabulary, perhaps from «Гули Зебо» (Beautiful Flower), the book we were reading in class, or maybe memorizing a poem that was to be recited that day. Poetry is incredibly important to Tajik culture. Most of the time when I would stumble through a line or two of the poem I was desperately trying to memorize, my host sisters would immediately recognize it and, fluidly and quickly, continue the recitation. Even now, months since I have gone over these poems, I can still recite them.

Soon after, my host mother would knock on my door, signaling breakfast. I would sit with my host mother and sometimes host father and we would converse in Tajiki. Often our breakfast would be шири биринҷ, which was warm milk with butter, sugar, and rice. Sometimes one of my host sisters or host brother would join us, but often they were still asleep. On Friday mornings my oldest host sister would go to dance class and one Friday I joined her, before running off to class myself. 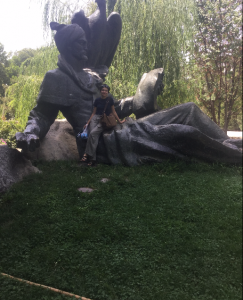 recently remodeled Soviet-style apartment building. The walk was beautiful and I would take moments to absorb the world around me, focusing on how happy I was to be in this place. I would generally arrive to class first, greeting my teachers and friends as they entered, and using any extra time for some last minute studying. Class would start with the question «дирӯз чи кор кардед?» (What did you do yesterday?) and people would tell stories of their host families or the meals they ate (in Tajiki, of course). We would then go over our шеърҳо ва ҳикойаҳо (poems and stories) that we had studied the day before. Class would continue with songs, vocabulary, and conversations. Sometimes we’d go out, but most of the time lunch was had outside in the courtyard. Our ошпаз (cook) would prepare something delicious like ош (the national dish made from rice, vegetables, and meat). After another hour of class we would venture into Душанбе or a surrounding city for a cultural excursion. We would go to museums, bazaars, or even take the occasional dance lesson. These trips would often end in a stop for яxмос (ice cream), as it was our resident director’s favorite treat.

After walking home from my classroom I would be greeted by my host sisters, mother, and brother. We’d have a snack and then sit around and talk. My favorite snack foods were тарбуз and чой (watermelon and tea). Though I consumed large quantities of them in my time there, I always ate them separately, since Tajik tradition dictates that eating them together causes illness. As a side note, Tajiki fruit is the best and sweetest fruit in the entire world, especially their melon. As we sat, my host brother, who was nine years old, would sometimes quiz me on my Tajiki by pointing to the English written on their kitchen appliances and grading my responses. The lowest grade I got was a 2 out of 5 when I was unable to translate “Integrated Cooling Systems.” Sometimes we’d all watch the Russian equivalent of MTV and my host sister would tell me about the Russian pop singers. I would generally go into my room to study before I would hear a knock on my door and my host sister would ask, «Мариям, берун рафтан мехоҳи?» ( Mariam (my Tajik name) do you want to go outside?) I would generally answer in the positive and join my host siblings outside to play games with the other kids (my age and younger) who lived in the apartment complex. We would stay out until around 8:00 then run upstairs for dinner, which I followed with a little more studying and sleep.

My summer in Tajikistan was an amazing life-changing experience, but, like most good things, it went much too quickly. I am now a Junior, studying at an all-girls boarding school in Virginia. It can be a grind and easy to lose track of why I am working so hard or what I am working for. I have an independent study in Farsi, so Persian is still very much a part of my academic endeavors, but I miss my days full of that specific and constant intellectual challenge that comes when studying abroad. However thinking back does not just make me envious of a time now gone, rather these memories of Tajikistan serve as a motivation, pushing me through a difficult math problem or English passage, with the hope of making my way back.