Scott is from Los Angeles, CA and is participating in the 2017-18 Taiwan academic year program. 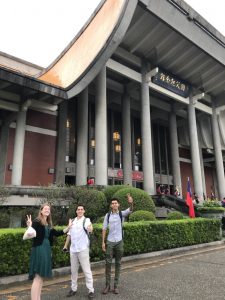 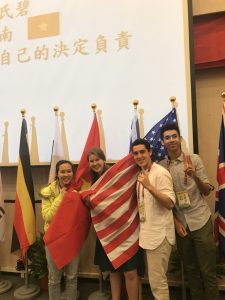 On the weekend of 11/03, I participated in this year’s (2017) “Taipei Mandarin Language Speech Competition” in Taipei City. My host institution, Wenzao Foreign Language University, allowed three classmates and I--three out of the four of us were NSLI-Y students--to compete (we had also all previously participated in Wenzao’s own speech competition). We all worked really hard and spent a lot of time preparing our scripts and memorizing our speeches. Our teachers, tutors and friends all helped us practice and gave us a lot of support (加油) throughout the entire process, and it wouldn’t have been possible to prepare as well without them. This is a very famous competition, drawing many very impressive foreign students from all over Taiwan together to compete. Us four students had over 70 competitors ranging from the college freshman to doctorate level graduate students. Only the top 17 students out of all the talented students there can win a prize, with the top three competitors winning the most significant recognition and rewards.

On the day of the competition, my classmates, a teacher, and our NSLI-Y local coordinator, Jenny, and I met early in the morning at the Kaohsiung High Speed Rail station (Kaohsiung [高雄] is our NSLI-Y program’s beautiful host city in southern Taiwan), to wait for our train to Taipei. Taiwan’s high speed rail trains are remarkably fast and very comfortable, making the convenient two hour journey fly by. When we arrived in Taipei, we took taxis to one of Taipei’s most famous destinations and the sight of the competition: 國父紀念館 (the Dr. Sun Yat Sen Memorial Hall). This is a very well-known building, containing art galleries, auditorium spaces, historical artifacts, and a massive bronze statue of Dr. Sun Yat Sen (the founding father of the Republic of China). My classmates and I were assigned numbers 23-26 in the speaking order, so although we didn’t have much time, we were able to observe some of the talented students we competed with. The speech prompt I chose was how little actions can make large impacts, with my topic being the impact of social media on mindset and how, although it has many benefits, can change the way young people relate to themselves in a negative way.

Before I got in front of the microphone, I was nervous, but the minute I 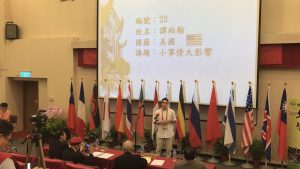 began speaking, the words flowed easily! I had prepared well. Although I didn’t win, I know that that was never the point. I believe that the experience itself was the victory. I met many interesting people and made new friends, rode Taiwan’s bullet train, tried grilled eel (a story for another time), and got to see just how fun Taipei is! Most importantly, I recognized how confident I am becoming in my Mandarin ability and was reinvigorated by watching other students speak so well. As I stated in my speech, “我認為每個人不要怕挑戰!” Don’t be afraid to go for it!