In part two of the NSLI-Y Parent Testimonials, we are excited to provide some additional testimonials from parents of recent NSLI-Y alumni. In their testimonials, parents discussed challenges that their child overcame while on NSLI-Y, how their concerns about the safety and security of their child were alleviated, and how their child was impacted. 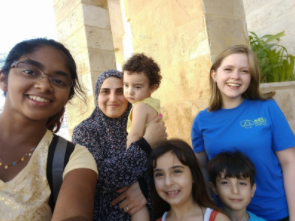 Meenu (left) takes a selfie with her host family and fellow NSLI-Y participant.

How did you manage or mitigate your nerves about study abroad?

Parent of Meenu (Arabic Summer): “Sending our daughter all by herself to a region that is generally in a state of tumult was nerve-wracking to say the least. We knew that she would be traveling with about twenty of her compatriots with adult supervision. Our overriding factor was for our daughter to have an experience that would help to broaden her knowledge about the world and satiate her love of languages. For what it’s worth, we put our faith in the State Department.” 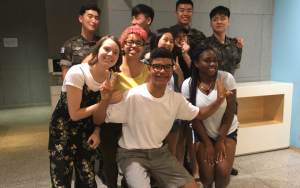 Dora (left) participated in the Korean summer program in 2017.

Parent of Dora (Korean Summer): “I don’t and didn’t know that much about South Korea and particularly this year with a lot of the political situations that are in the news, I had some trepidation. But I also know that NSLI-Y really looks into the countries that they travel to and I have seen that they have decided not to travel to certain countries, so I felt confident in their decision-making processes of where they go and where they introduce kids.” 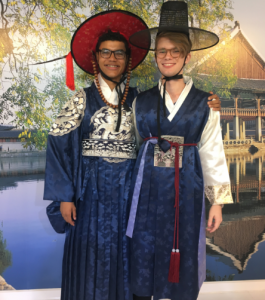 Jack (right) participated in the Korean summer program in 2017.

Parent of Jack (Korea Summer): “Walking up the gang plank to get on the plane, my son was nervous. What if he were homesick? What if he struggled in Korean? What if he were the only one to struggle? ‘Just tell one person of your concerns. I promise you’re not the only one feeling these misgivings,’ we said. We received loads of texts during orientation, but within just a few days, he’d made new friends, tried new foods, explored new places and opportunities that expanded his world view. The texts became intermittent. And then they became apologetic. ‘I’m sorry. I’m too busy to get back to you right away.’ That was perfect. NSLI-Y offered so much great support and so many opportunities in Korea that when he returned, he said he hoped to go back.”

How was NSLI-Y meaningful for your son or daughter? 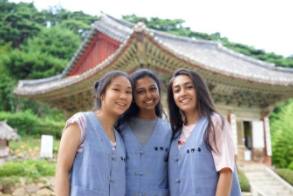 Parent of Marisa (Korean 2017): “NSLI-Y was so impactful for Marisa. She went to Korea the summer between her junior and senior year. As far as where she was in life, she was really at the point where she was ready to dive into that realm of independence. NSLI-Y provided us an opportunity, a really safe opportunity, for her to be in an environment where she was able to learn. She was able to be… around people who weren’t like her regular classmates. It was really a cross-section of America that the NSLI-Y program really tries to incorporate. She also interacted with her host family a lot. The impact was just amazing to her. I think that the first or second week that she was there, she was just really overwhelmed and there was just so much change to take in … and it was really amazing to see her progression over the 6 weeks. She got more comfortable, there’s stuff that she loved doing, she got in a routine, she started learning Korean, she started liking specific things about the city like the coffee shops with the traditional aspects.

[…]There was actually one time I was talking to her on the phone and her host mom came in and while Marisa was talking to me, she started talking to her host mom right in between the conversation. She switched from English to Korean without even thinking, and that was amazing that she was able to do that within 6 weeks. So the impact to her personality, to her language acquisition, to the breadth of character and experience that she’s gained is just phenomenal. We were just so privileged that she had that opportunity.”

What advice would you offer other families considering NSLI-Y?

Parent of Seth (Chinese Summer): “If you become familiar with what is involved in the program [….] you will probably feel very comfortable knowing that your son or daughter is in excellent hands. The [implementing organization] provided excellent guides who were caring and knowledgeable. I didn’t worry for a minute about the safety and welfare of my son. I knew that he would be in good hands, and the State Department fully supported this program so we were very very comfortable with it. 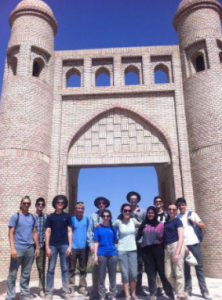 Jack (fourth from left) participated in the Persian (Tajiki) summer program in 2016.

What challenges did you and your son/daughter overcome during NSLI-Y?

Parent of Jack (Persian Summer): "We certainly missed him when he left, but I think he encountered the normal things that kids encounter when they go away for a while from their home. First, homesickness and then sometimes a little actual sickness. Neither one was very serious and folks at NSLI-Y took such great care of him and later in his host family, he was in such a good host family, that we didn’t even give it another thought. He was in great hands with the program."