Community service continues to shape NSLI-Y participants' interaction with their host country in a manner that transcends spoken language: volunteering. By volunteering, NSLI-Y students continue to study their target languages outside of the classroom by engaging and helping locals. Read part 3 out of 3 of our series below. 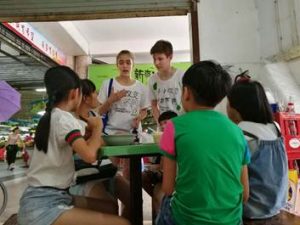 NSLI-Y Chinese students began their summer community service project, which focuses on reducing waste from plastic bag usage throughout the city. The project began with groups of students designing surveys to conduct with local citizens, with questions ranging from “How many plastic bags do you use per day?” to “What are your opinions on environmental pollution?” After translating their surveys into Chinese with help from their language partners, students spent their second day of community service interviewing individuals on the Beijing Normal University Zhuhai campus to gain insight into local views and perceptions of waste.

NSLI-Y Chinese students also completed their final hours of community service by traveling to Zhuhai’s Qingzhu community to initiate conversations with neighborhood residents about awareness of plastic waste in China. After teaming up with peer volunteers at Qingzhu’s Community Center, the students were taken to various locations in the community to meet local residents. As a group, students spoke to over 100 Qingzhu residents and received many signatures on their self-designed team t-shirts. Signatures demonstrated 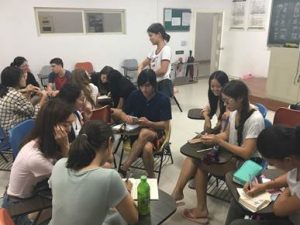 that a resident understood the student’s campaign for greater awareness and that they would begin to be more conscious and aware of plastic waste in their daily life.

It doesn't just stop there - NSLI-Y Chinese students also volunteered at Xinxin Nursery School, which is a care center for young children with autism or other disabilities. Students spent time with the children – talking, drawing, and playing with them. They felt that they learned something about the care of children with disabilities in China while at the same time enhanced the experience for the children and helped the center.

NSLI-Y Korean participants and their supporters (Korean university students) visited Seobu Silver Care Center to spend timewith the elderly who have Alzheimer’s disease and have experienced strokes. Participant Danielle reflected, “I helped feed a kind lady some yogurt, a man his lunch, and also helped push others around in their wheelchairs for fresh air. […] the people there were so surprised to see such a large group of young foreigners there to solely volunteer. To share smiles and make those experiences with the curious grandmas and grandpas was not only heartwarming but also so fulfilling. I realized that in Korean culture, respecting an elder doesn’t always have to meal listening to their every order or regarding them as the wisest, but instead, is simply taking care of and appreciating them.” 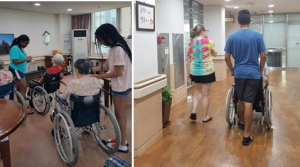 The second group of NSLI-Y Korean students and their supporters visited Seobu Silver Care Center to spend time with the elderly who have Alzheimer’s disease and have experienced strokes. Participant Anca reflects: “When we arrived there, I was nervous because I had never done this kind of volunteering before [...] Whilst there, several students and I first watched the elderly play a game and would help them whenever they needed assistance. The next task was strolling the elderly around the nursing home. Since the majority of them were in wheelchairs, we slowly pushed them around. Afterwards, it was time for dinner and since the elders’ mobility was limited, we helped feed them. Overall, my volunteering was very insightful.” 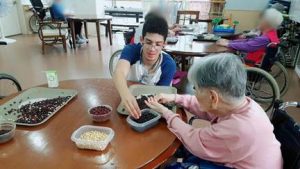 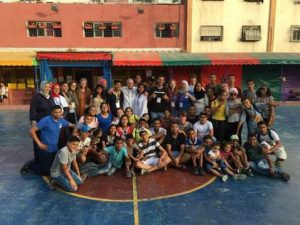 NSLI-Y Arabic participants volunteered at the Jordanian Clothing Bank. The Jordanian Clothing Bank receives many donations from universities, government institutes, international organizations, and individuals. The students volunteered for 4 hours sifting through clothes and putting them in appropriate bins to be distributed to community members in need. In spite of the heat, students stayed positive and sifted through over 100 bags!

NSLI-Y Arabic participants also spent the afternoon volunteering with children and youth at the Sidi Moumen Cultural Center. Sidi Moumen Cultural Center is a multi-purpose center run in one of the poorest neighborhoods in Casablanca, serving youth, as well as women and other community members, encouraging them to volunteer and be in charge of their own lives. The NSLI-Y students participated in and led various activities during the summer camp sessions already being held at the center.