The Beauty of the Struggle

Elise is from Tucker, Georgia and participated in the Morocco Summer 2015 program and the Morocco Academic Year 2017-2018 program. 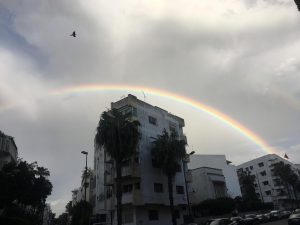 As of today, it has been 186 days since I landed in Morocco. I could sit here and type on this, “little box of tricks,” that I have loved every moment; that Morocco is heaven on Earth; that I have never and will never want to leave. That, however, would be a disservice not only to myself but to any other prospective AY students.

Now, with that being said, I should emphasize that these past six months (and I expect the following three months as well) overall have been the most rewarding experience of my life. I have learned more about myself and who I want to be than all of high school combined and I progressed farther in my Arabic studies than the previous three years put together. However, I should emphasize that rewarding does not always equal fun. Sometimes rewarding means struggle; sometimes it means falling down and never wanting to get back up- but getting back up anyways; sometimes rewarding means wanting to quit- but continuing on anyway.

All of my life I have been running. Running so fast that the days blurred in front of me and all I could think about was what was next. I was so caught up in the future, that I forgot about the present. Since moving to Morocco, however, running has not been an option. Since moving to Morocco, my feet have been tied together and when I tried to run all I did was fall down, again and again and again. So instead of running I had to learn to shuffle. I had to learn the art of putting one foot in front of the other. And while this has been incredibly difficult to adjust to, it honestly is one of the most important lessons I’ve learned. They always tell you to stop and smell the roses and it’s true, even if you don’t want to or you don’t care to- you gotta stick your face in a rose bush every once in awhile (metaphorically speaking only, of course, rose bushes tend to be a bit thorny). 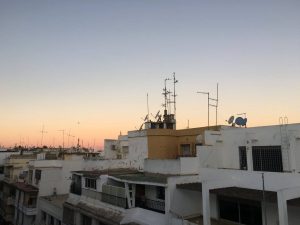 When my flight to Washington, D.C. landed in September, I was full of uninformed hope- the embodiment of, “ignorance is bliss.” I thought that I would never experience culture shock or homesickness. I thought that my generally level-headed and unemotional mindset would protect me from breaking down and wanting to leave. I thought that I would love every second of every day while I was in Morocco. That is very far from reality, but that is OK. The culture shock and the homesickness, they’re part of the journey. They are natural and I have learned so much more from my stormy days than my sunny ones. I have matured and developed from my perseverance and resilience- something that cannot be taught- rather, it must be learned from personal experience. This trip has not been a walk in the park, it’s been a shuffle through the happiest days of my life and a crawl through the darkest.

If I could go back, I would do it all over again. I would not change a single thing about my experience and that is the important part. Despite the struggle- I would do it a million times over. Although it was initially the hardest lesson I had to learn, there's a certain beauty to shuffling. A certain beauty to taking walking aimlessly through Agdal or Les Orangers contemplating existence and identity and language fluency. There's a certain beauty to sitting in a whirlwind that no matter how hard you try, there's no chance of catching up to. Without this year, there would be so many lessons that would have gone unlearned- many of which I now consider essential to who I am. So because of that, despite the difficulties, despite the homesickness and the struggle- I say, "Do it." To anyone considering a gap year or study abroad, especially with NSLI-Y, do it. Do it as much as you can for as long as you can. I promise you that it will be one of the most important parts of your education and/or life. The memories you make, you will hold against your heart forever.