Discovering Myself in Chengdu

Alisa is from Short Hills, NJ and participated in the 2017 China summer program.

During the first week of my program in Chengdu, China, I remember hearing a thought provoking statement during our visit to the U.S. Consulate. A foreign service officer explained to us that the relations between two countries are built on people-to-people interactions, more so than exchanges between media, government, etc. I remember thinking that this concept was so simple, yet so powerful.

After finishing my program, I can now say with certainty that the people-to-people interactions I had with Chinese people were the most rewarding part of my experience. Whether it was joking around with my Chinese friends, having meaningful discussions with my host family, or simply bargaining with shopkeepers in Chinese, I feel as if I have broken down many stereotypes and gained a true appreciation for China and its deep culture. 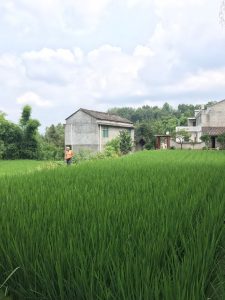 I had the unique chance to communicate with Chinese people from all walks of life, such as the ones I met and befriended on domestic flights, my host family, teachers, peer tutors, the elderly, young children, shopkeepers, and waiters. Conversations in Chinese with these people have contributed to my learning and growth. In addition, I feel as if I’ve taken an initial step toward creating an effective understanding of the two vastly different cultures of America and China. I was able to broaden my horizons by traveling to many Chinese landmarks, eating authentic Sichuan cuisine, and learning about Chinese trends and fashion. I was a true global ambassador, representing America while at the same time forming bonds and connections with China.

From climbing the Great Wall to swooning over cute pandas, to having a traditional farm lunch in the countryside, to crashing Chinese weddings, I was truly immersed in the local Chinese culture, an experience unlike anything I could have imagined! My excitement made my host family appreciate their culture even more. Wednesday was my favorite day of the week because after we completed our morning language classes, we spent the rest of the day on a cultural excursion, usually to do community service. I volunteered at a kids’ summer camp, helped out at senior citizen centers, and taught small children English. 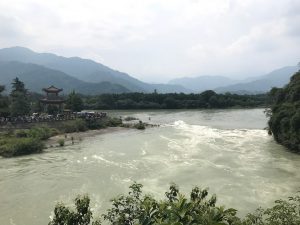 On one particular Wednesday, we went to Huang Long Xi, a famous ancient town that has a river flowing through it. There were hundreds of Chinese people playing in the river, and my friend and I tried to stay away as to not get soaked. Unfortunately, this was not so easy. As my friend was taking a picture of me, a man came up behind us and soaked us with a bucket of water. We were annoyed, but at the same time we felt as if we were getting the real, authentic feel of Huang Long Xi.

I also enjoyed the weekends, when my host family and I would often go on long road trips to a different city and explore its history and culture. Overall, I went to six different cities over the course of 6 weeks!

I was in tears at the Chengdu airport, as saying goodbye to my host mother and sister was so difficult.

I became a part of a group with 27 other teenagers who had turned into family over the course of the six weeks.

I have had a lot to think about now that I’m back in America, and I’m sure my experiences in China will continue to impact my day to day life.