C.J. is from Albuquerque, NM and participated in the Arabic programs in Egypt and Morocco.

There is a saying in the NSLI-Y community that, “you are just one C.J. away from knowing everyone.” Meaning, Carlo James Aragon (better known as C.J.) knows so many NSLI-Y alumni and applicants that you are sure to have him as a mutual acquaintance. C.J. has touched many in the NSLI-Y community, spanning across cultures and continents. C.J.’s passion for cross-cultural connections has shone through during his two NSLI-Y Arabic programs and time abroad in the Middle East, as well as his advocacy for U.S. State Department exchange programs in his home state of New Mexico. 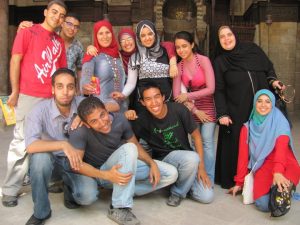 With an initial curiosity in Ancient Egyptian history, Carlo’s interest in the Middle East was sparked at a young age. As he expanded his interest in the region, he delved into the current events of the modern Arabic world. After that, he was hooked, “I realized that Egypt was a part of something more than just its rich ancient history, it was also part of the Islamic and Arabic speaking world. I was curious to understand this culture and history.” By the time he started high school, he had heard about NSLI-Y, a program that combined his love for languages with thirst for knowledge about the Arab world. After a competitive application process, Carlo was on his way to Cairo, Egypt for his first of two NSLI-Y Arabic programs. The following summer of 2011, Carlo participated in another NSLI-Y Arabic program, this time in Morocco. During his NSLI-Y programs, Carlo was astonished at how quickly he could understand Arabic language concepts and carry out conversations with locals. He particularly enjoyed haggling with vendors at the local market, soaking in all of the culture and language the country had to offer from an on the ground perspective. C.J. discussed a time where he spent hours discussing host-country life with a tea vendor, only to bring home a discounted set of teacups to his host family! These experiences turned out to be pivotal in his Arabic proficiency development as well as his decision to dedicate his career to working in the region. Carlo completed his NSLI-Y programs with a concrete plan to earn a college degree in Arabic Language and International Relations with a career aspiration dedicated to the Arabic speaking world.

Carlo’s two NSLI-Y experiences ignited the insatiable spark for future Arabic learning. After graduating high school, C.J. enrolled at the University of New Mexico, where he studied Arabic, Spanish, and Political Science. While a student at The University of New Mexico, Carlo joined the inaugural group of NSLI-Y Alumni Representatives of the Alumni Association. During his time in New Mexico, Carlo advocated tirelessly for the NSLI-Y and other exchange programs. He gave presentations at countless high schools and community centers across the state, demonstrating his pride for NSLI-Y, New Mexico, and his positive experience in the Middle East. During this time, NSLI-Y applications from the state increased dramatically. 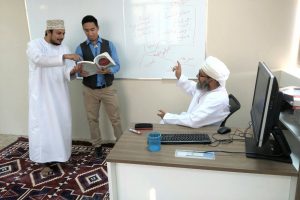 While an undergraduate, Carlo continued to pursue U.S. government exchange opportunities to continue to advance his Arabic skills. First, Carlo studied intensive Arabic in Oman with the Critical Language Scholarship (CLS). Following his participation in CLS, C.J. returned to Oman with the Boren Scholarship.

After college, Carlo returned to Oman to live full time. He joined the Noor Majan Arabic Institute as the Associate Director of Business Development. At the institute, Carlo utilizes his language and cultural skills on a daily basis by helping students from around the world understand Oman and the greater Middle-East. In a professional capacity, working with Omani businesses and American institutions of higher education requires a delicate negotiation between American and Arab cultural norms and expectations, a tightrope that C.J. is able to navigate.

This November, Carlo was chosen as a Rangel Fellow. This U.S. State Department fellowship selects 30 extraordinary individuals who demonstrate a dedication to Foreign Service. The fellowship encourages the application of members of minority groups historically underrepresented in the Foreign Service. Through the fellowship, Carlo will be awarded a scholarship to support his pursuit of a graduate degree in Foreign Affairs, with his choice as the Fletcher School of Law and Diplomacy at Tufts University. He will also participate in two foreign policy internships, the first on Capitol Hill, and the second overseas at a U.S. embassy or consulate. After completing his graduate degree, Carlo will begin his position as a Foreign Service Officer.

Since his study abroad beginnings with NSLI-Y, Carlo has been preparing for the opportunity to use his language abilities to help his country. As a Foreign Service Officer, he hopes to build mutual understanding on a wider scale, touching even more lives than before.