Fiona is from Hamden, CT and participated in the 2018 Hindi summer program in India. 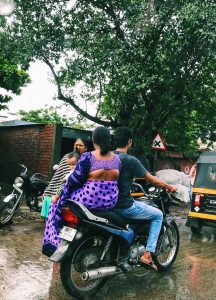 Within minutes of landing in Mumbai, my intrepid NSLI students and I were treated with a musical greeting of vehicular communication. It is tempting to characterize this intercourse as the honking of car horns, however the use of such an umbrella term as, “car” would exclude so many of India’s outlandish and colorful modes of transportation. Indian roads, as we soon came to realize, are just as whimsically chaotic as the various tones of the environment imply. Reluctantly boarding the bus after a fifteen hour flight, I was compelled to keep my eyes open throughout the four hour drive to Pune, transfixed by the madness outside my window. The street life was nothing like I’d ever seen; small orange and yellow busses, three- wheelers, and trucks stacked with goods and produce, which also carried people riding atop the heaps, wove in and around each other in all directions. It was evident that typical traffic laws abided by universally in the U.S. were taken as mere suggestions on Indian roadways, considering lanes were utterly disregarded and various vehicles pushed through to their destinations from both directions. 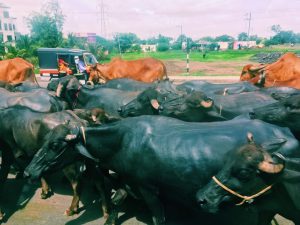 As taken as I was by this sort of organized chaos, it was the vibrant entity beyond the streets that captivated me absolutely. I have done a significant amount of traveling, but I have never witnessed as much life in every imaginable nook and cranny as I do when driving in India. Dogs, cats, goats, sheep, cows, and people occupy every square inch of space that isn’t taken by tarp shelters, street vendors, and shoebox- sized shops. The energy in the atmosphere brings into existence a foreign language; a vernacular spoken and understood by the beings and people of India, but not by me.

Even as I drive to and from school each day, the delicate and diverse intricacies of Pune make it almost impossible to gauge my route, despite traveling along the same roads routinely. Occasionally I’ll see a mother dog nursing her pups atop a roof, or a small group of men clustered close together, eating mangos and laughing loudly. With each car ride it is abundantly clear to me that this culture is as ancient as the country itself. About a month before departing from the U.S., I can remember striking up a conversation with a friend of a friend, a stranger to me. He inquired about my summer plans and I told him I’d be traveling to India. He gave me a huge smile and told me frankly and without room for dispute that India was the “land of mysteries.” This fact is now as undeniably transparent to me as my love for observing India’s subtle, yet wild perplexities through the window of a car.