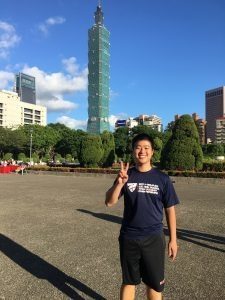 William is from Los Angeles, CA and participated in the 2018 Taiwan summer program, as pictured above.

Since completing his NSLI-Y program, William has actively promoted opportunities for language learning and cross-cultural exchange. He served as a NSLI-Y Alumni Representative in 2019 and 2020, contributed to the Alumni Association, and launched a mentorship program for applicants from backgrounds underrepresented in study abroad in 2020 with fellow alumni representatives. He also received the U.S. State Department’s Citizen Diplomacy Action Fund to organize a virtual, two-day conference for middle school students across the United States and Chinese-speaking regions.

During his undergraduate studies, he held a variety of internships, including with the U.S. Department of State in China, the U.S. Attorney’s Office for the Southern District of New York, the U.S. House of Representatives and Senate, and with the Center for Strategic and International Studies.

In 2022, William graduated from Columbia University with a double major in Political Science and East Asian Studies. He currently researches U.S. policy in the Asia-Pacific for Professor Thomas Christensen and writes analysis pieces on China's foreign relations. In 2022, he was awarded the Critical Language Scholarship to study Indonesian and selected as the Michel David-Weill Scholarship laureate. William will pursue a master's degree in International Governance and Diplomacy at Sciences Po in Paris, where he will study international trade and the U.S.-EU-China triangular relationship. Following his studies in France, he will attend Harvard Law School.

Despite being the son of a Taiwanese immigrant, I constantly told myself this, adhering to the advice of my parents: Don’t be the stereotypical, antisocial Chinese kid. Pop culture was an incessant reminder that we amount to little more than underappreciated, behind-the-scenes geniuses. Or, in Hollywood, nerdy sidekicks to the dashing, charismatic protagonist.

If I hoped to one day shatter the bamboo ceiling, I needed to become American. At 11, I was whisked away to a prestigious junior boarding school on the East Coast. At first, I felt akin to a fish out of water, surrounded by wealthy peers with influential parents who navigated the most exclusive financial and government circles. However, I quickly learned to fit in. I minimized and understated my Chinese heritage, viewing it as a barrier to future career success. Instead, I played squash, honed my table etiquette, and mastered eloquent oratory. Yet, something was missing.

I felt compelled to share this story today, I am not alone in this experience. Data collected by the U.S. Census shows that a mere 40% of the 3.8 million Chinese Americans residing in the United States can speak Mandarin fluently—and the literacy rate is far lower. Increasingly, Chinese Americans are losing touch with their roots. This widespread phenomenon reaches many children of immigrants, not merely those of Chinese descent, which is troubling. 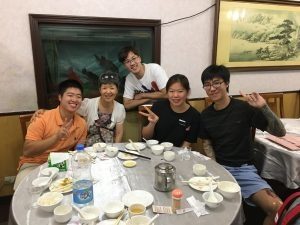 William pictured at a dinner table with his host family

This past summer in Taiwan answered my lifelong grapple with my identity. NSLI-Y presented me with an opportunity, not only to study the language and culture that I loved, but also to return to my homeland. I immediately fell in love with the clean public transit, the jostling crowds at night markets, the whizzing motorcycles racing to work… even the warm, humid air. I met my extended family for the first time. I found comfort in Taiwanese conversation, which frowned upon braggadocio and emphasized intent listening, a slight departure from the United States. I gorged myself on steamed dumplings, locally known as xiaolongbao, and downed sweet, icy bubble tea. The sensation is indescribable with words. Somehow, in Taiwan, I felt I had arrived home.

I share this in the hopes that all high school students apply to study abroad with NSLI-Y. It will both challenge and reshape your worldview. It will give you greater appreciation for the United States of America and its diverse melting pot of cultures. Immersing myself in a foreign culture transformed my life, and I know it will transform yours.

Today, I’m Chinese. I’m American. And I’m proud of it.