Celebrating Food and Diversity in Morocco

Meliha is from Boise, ID and participated in the Arabic Academic Year 2017-2018 program in Morocco. 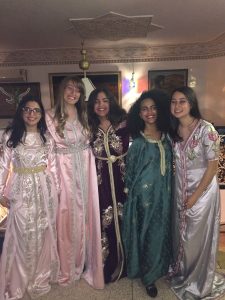 While participating on NSLI-Y in Morocco, Meliha quickly learned that food brings people together! To bond with her host mom, Meliha spent many hours by her side, learning how to make Moroccan bread. During the holidays, she and her friends cooked a Christmas dinner for their local peers. And just for fun, she and her fellow NSLI-Y participant, Isaac, whipped up bagels for their Moroccan friends so they could experience a taste of American comfort.

The importance of food was just one of many lessons Meliha experienced during her year abroad. She admitted that in the beginning, it was easy to only spend time with Americans because they shared a common language. Initially, forcing herself to go out alone, to sit in cafes and speak in either Darija or Modern Standard Arabic was embarrassing. After a month or two, she realized that the efforts she made to develop Moroccan friendships and to use the language out in the community were helping her tremendously during class. 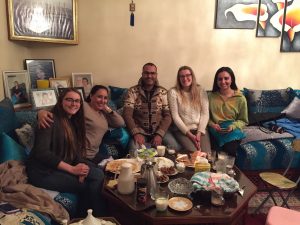 As a Bosnian Muslim refugee from Mostar, Bosnia and Herzegovina now living in Boise, ID, it was also important for Meliha to share her own cultural background with her host community. Her host mom was curious about her phone calls to her natural family in Bosnian and asked to learn a few words of Bosnian – vocabulary the two of them enthusiastically wielded as they navigated excursions in Rabat, communicating in their own secret language.

Just as Meliha was excited to share her culture, she gained extensive cultural knowledge from her Moroccan peers. From learning how to make traditional Moroccan tea with her language partner to cooking Tanjine with her host mother, Meliha found that her ability to speak Modern Standard Arabic and Darija provided ample opportunity to truly be a part of her host community. 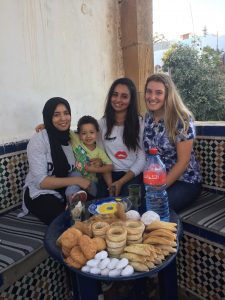 These efforts to develop linguistic proficiency and cultural insight allowed Meliha to research and present on Islamic feminism in Morocco – entirely in Arabic! She contacted several organizations and cooperatives independently, which was initially intimidating, until she saw that she was able to successfully schedule meetings and interviews. At one meeting, Meliha felt empowered realizing that she understood almost everything that was discussed, even participating in a discussion workshop afterward.

Although she always knew she was interested in studying Arabic beyond the high school level, it was the NSLI-Y program that facilitated the close friendships that allow Meliha to continue using Arabic on a daily basis. She will attend the University of Virginia in the fall, studying engineering and Arabic. She is considering a career in diplomacy after a year of citizen diplomacy in the form of bagels and bilingualism.