Chelby is from Frankfort, Illinois and participated in the 2018-2019 NSLI-Y Chinese Academic Year program in Taiwan.

Being a NSLI-Y student is extremely bold. It's bold and awkward and sometimes even comical.

With each language gain, there is accidentally asking a grocery store clerk for a "stomach" in Chinese instead of a "bag".

With every connection with friends and family in your new country, there is joining your school's Beatbox Acapella Club as the only African-American member and being thanked for your race's contribution to Hip-Hop.

And veiled behind every Taipei, Sun Moon Lake, and best day of your life, there is a longing to be a perfect teenager while studying abroad.

Thankfully, while being an improvisation student at The Second City, a comedy school in

Chicago, I was taught three important rules that conveniently applied to my experiences being a global one:

The night before my very first improvisation class, I thought up a character I believed was so hilarious, it would reduce the likelihood of me failing to be funny in front of my soon-to-be classmates. This character was a young boy raised by penguins. I prepared a goofy voice, a compelling backstory, and as a finishing touch, crafted a penguin-like waddle that my character would use. If you know anything about improvisation, scenes and characters are supposed to be created on the spot, a lesson reinforced to me that day by an angry improv teacher who knew I planned every detail of my so amusing penguin boy. What he explained to me is, "the fear of not being funny will stop you from being great", which if you replace the word funny with "not being fluent" also makes sense.

Countless times while studying Chinese, I have held my tongue, using only the simplest terms to express myself because I did not want to risk saying something wrong. However, it is within experiencing failure that you can take the steps necessary to improve your language ability. I have finally learned after eight months abroad that if I am not willing to make a mistake how will I get better? How can I get better? 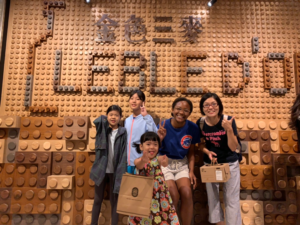 In every beginner level improvisation class, the teacher will drill this lesson more than any other: make your partner look funny! Being on an improvisation team is not a one-man/woman stand-up comedy special; it is working with a group of people to create stories that once told, will never be told again. So if you can set-up your partner to say a funny joke or let them be the star of a scene or two, this creates a trust that will be reciprocated to you at your next performance. Learning a language with the NSLI-Y program is competitive. There are times when I felt like, if I was just better than so-and-so at Mandarin, I would feel so much happier, but I have slowly discovered that there is a thin and important line between being competitive and wanting to appear competitive. True competitiveness means to be inspired by your classmates and a new environment to improve yourself, for yourself, while the latter is simply an attempt to be recognized. Unfortunately, I can testify that one is often executed much easier than the other. That is why I have been making an active effort to “make my partners look funny”; whether it is complementing a classmate on their use of a new vocabulary term or encouraging them when they feel their language progress is not up to par, I have concluded that I can be competitive while also being support system for other NSLI-Y students. It is extremely easy to feel as though you are by yourself when studying abroad, but like being in an improv group, you make can make your partners better by being a great partner yourself. 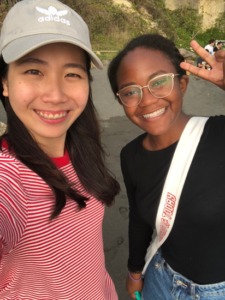 And lastly; The worse that can happen, is no one laughs (understands what you say):

So many times, on so many stages, no one laughs at my jokes; there is this gut-wrenching silence that is often made worse by the sound of a distant cough or a hearty yawn. In times like these, the only thing you can do is to learn from your mistakes and try again next time. This lesson was the hardest for me to learn on this program due to the fact that I constantly want everyone to think that I am the perfect language learner, which as my parents constantly tell me, is impossible. Originally, when I would speak Mandarin to my Taiwanese classmates, friends, and even family, if I made a blatant mistake, I would immediately tense up, not wanting to risk failure by speaking again. Now, when I look back on being an improviser, I see clearly that it is within those awkward silences and language inaccuracies that true improvement can begin. If no one understands you the first time around, this is simply a signal to go back to the books, ask for help, reassess, and try again.

Being a NSLI-Y student is to be a student of improvisation. There may initially be a fear of going on the stage of a new country with a language you may not yet understand, but as you venture on this journey remember that you had the courage to go on the stage itself, and that is hilariously courageous. 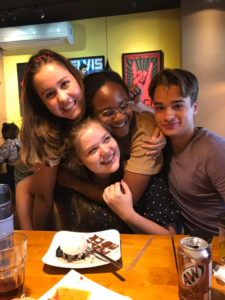