A Visit to the Matryoshka Factory

Julia is from Milwaukee, WI and participated in the 2019 Russian summer program.

In Kirov, Matryoshka dolls are begun by splitting a piece of wood into four. Then a piece is selected, and inserted onto a lathe that spins parallel to the master carver so fast that the wood becomes a blur. Our group stood back and watched him work. He stood at the table with a long piece of metal that had something almost like a straight razor at one end. He would touch it to the spinning wood, and shavings flew. He made no measurements, seeming to know exactly where to cut, where to press the blade and where to make only a shallow incision. 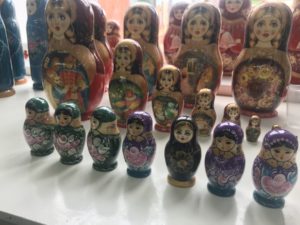 At one point he moved perpendicular and used another tool to bore a hole in one end, moving slowly to make it bigger and bigger. When it stopped spinning, there was the bottom of a matryoshka doll in his hand. Somehow it fit perfectly with the top he had already made. Then he added another piece of wood and carved a small mushroom with the same speed and dexterity. I won it, later, for remembering how many dolls (eight) were inside the first Russian matryoshka. 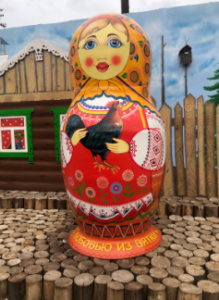 We were at the factory for maybe three hours, while we painted our own wooden dolls and learned about the history of matryoshka dolls in Russia. One of the head painters told us that the largest matryoshka doll had 72 dolls inside of it, each one only a few millimeters thick. It would have taken incredible patience before the painting even began, the woodworker first slowly and carefully carving away at the spinning wood.

On the bus ride back to the hostel, I turned the mushroom over and over in my hands, thinking about the master carver in his workroom, turning hunks of wood into pieces of art.