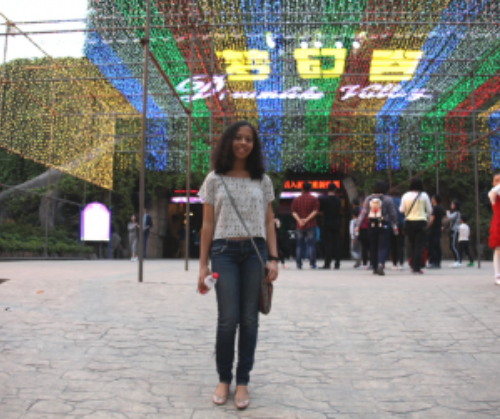 Natalie Johnson was raised in Milwaukee. As a child, she developed an interest in East Asia through her passion for anime. During her junior year of high school, she took a Global History class that covered modern Chinese history, which sparked a specific interest in China and a desire to experience it firsthand. At this time, she learned about NSLI-Y through her older sister. Her dreams came true when she participated in the summer 2014 and academic year 2015-16 programs in China.

Her NSLI-Y experiences were rewarding, but also challenging. Her summer experience took place in Chengdu. Early on, she attempted to buy dumplings at a food stall by her school. She felt confident she could do the task. The woman running the food stand, however, could not understand her Chinese even after repeated efforts. “I even began raising my hand up and down to match the tonal changes in the sentence.” Eventually she was able to order dumplings, but not before drawing attention and some laughter from others nearby. “I reminded myself that though this time was hard, the next one would be less so. It was on me to continue seeking out experiences like this that would allow my language skills to improve and myself to grow personally.” 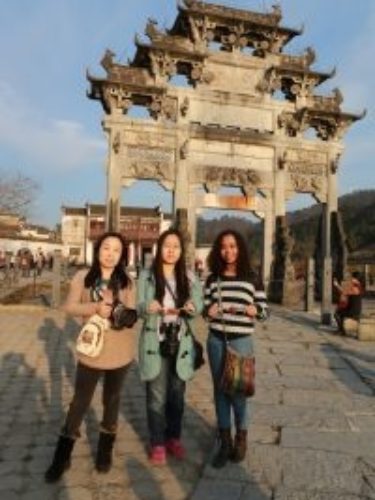 Her academic year program took place in Changzhou. Toward the end of the program, she was waiting for a bus when a man approached her and asked her if she was Indian. “I told him no and that I am black and white, and from the United States. And that no, not all black people have dark skin.” She told him that she was an exchange student studying Chinese at a local high school and that she was a volunteer English teacher on weekends at the Women & Children Activity Center nearby. They then discussed various topics, including the weather in her hometown. This experience helped her realize how much progress she had made through her NSLI-Y programs. “Language learning, especially through immersion, is an arduous process. While on program, I often felt that I was not progressing much day by day. Looking back on the experience as a whole, however, shows me that a lot was accomplished between my dumpling disaster in Chengdu and this conversation at the bus stop.”

Natalie also learned that it is impossible to be an idle observer of a foreign culture. “Locals react to you as much as you react to their country.” Coming from a racially diverse family, she was often stared at and asked questions about her nationality. One little girl once shouted in Chinese, “She’s completely different from what I expected an American to look like!” While this was not always easy for Natalie, it provided many opportunities to represent the diversity of the US and many learning and growth experiences. “Hardships in mind, I still hold that there truly is no better way to gain a personal insight into another culture than going abroad. It will put you face-to-face with the major issues affecting the country. While many exchange students’ photos on social media of them smiling ear-to-ear on foreign beaches and mountaintops may make it seem like studying abroad is a magical, otherworldly experience, it does not tell the whole story. These superficial snapshots into the new lives we fall into abroad tell only a small part of what makes the experience magical, and [little] of what makes exchange so transformative.” 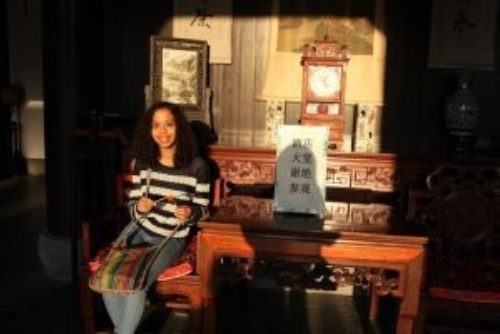 Since returning, Natalie continues to work on her Chinese by reading Chinese magazines and books and keeping in touch with her host family, Chinese friends, and Mandarin teachers through WeChat. She often shares pictures on WeChat using Chinese to explain what life is like in the U.S. She plans on continuing Chinese classes this fall at Stanford University, and hopes to study in Taipei next summer. She is considering focusing on Urban Studies in university. “My year in Changzhou deepened my interests in how culture influences urbanization, politics, and society, as well as the ways in which people from different backgrounds interact with each other and why.” She hopes to work on projects that engage the large Chinese population in the Bay Area. This fall, she will be a part-time assistant English teacher to Chinese children at an after-school educational program in Palo Alto. Long term, she sees herself working in the Foreign Service or in international journalism and can envision spending long periods of time working in China, Taiwan, or Hong Kong.

As of June 2017, Natalie finished her first year at Stanford University. She is majoring in African & African American Studies and is continuing her language learning through a minor in Modern Languages focused on Mandarin Chinese and Spanish.

Natalie spent the summer of 2017 interning in Taiwan at the Taiwan Foundation for Democracy, helping to organize the 2017 Asia Young Leaders for Democracy Conference in July 2017. The conference brings young people and NGO activists together from across the world to visit Taiwan for a two-week program. Programming includes lectures, discussion sessions on democracy and human rights, and extensive networking opportunities. Participants also learn about Taiwan’s successful democratization and culture and history through field excursions.

In the future, Natalie hopes to be a writer and work in human rights, domestically and internationally.

Natalie graduated from Stanford University in June 2020 with a Bachelor of Arts in African and African American Studies, with minors in German Studies and Creative Writing. Since her last update, she spent extensive time in college focusing on her art and studying abroad, including time in Berlin, Germany, and Cape Town, South Africa. Natalie is set to begin her first full-time job as a systems engineer at the end of this year.

Natalie still keeps in touch with her host sister from China, as well as other exchange student friends from around the world that she met during her academic year NSLI-Y program. These conversations have helped her gain a global view of the ongoing COVID-19 pandemic. Natalie encourages anyone still in doubt of the interconnectedness of our world—or anyone seeking a deeper appreciation of the significance of culture, history, and politics on our everyday lives—to try studying abroad (once it becomes safe to do so, of course).