Crashing Chisinau: My Summer in Moldova

AJ is from Elk River, MN and participated in the Russian Summer Program 2019 in Moldova.

AJ has always enjoyed learning about languages and linguistics. The first non-native language he learned was American Sign Language. He acquired this skill at the young age of five or six. As he got older, his interests shifted more to verbal languages. He studied French at an immersion school, picked up Hebrew at Shabbat services, and developed a taste for Soviet classics and Italian rap, among other examples. AJ went on to explore the mechanics behind languages by attending Ohio State University’s Summer Linguistics Institute for Youth Scholars (SLIYS) for two summers in a row. Even in school he’d find some way to tie his papers back to languages and linguistics and wrote his senior thesis on the consequences of losing endangered languages. It was apparent from the start of his life that he had a desire to learn languages, both for fun and because of all the friendships he would make along the way. 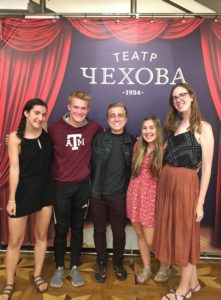 While he dabbled in many languages including Arabic, Serbo-Croatian, Korean, and Norwegian, his heart was set on Russian and he was thrilled when he learned that NSLI-Y offered a Russian program during the summer. He applied for the generous scholarship and was ecstatic when he opened his acceptance email and discovered that he would be studying in the beautiful country of Moldova.

AJ studied in the capitol of Chisinau along with 17 other NSLI-Y participants. He still remembers the confusion he encountered when his Moldovan host mother picked him up from orientation and was only able to communicate in Russian. Although he could barely greet her at the time, the intensive study that awaited him in the weeks ahead prepared him to grow into more advanced conversations in the near future. A typical day consisted of four hours of grammar and phonetics lessons followed by lunch and, in most days, an afternoon excursion which entailed exploring the city on a scavenger hunt, speaking Russian with local peers, volunteering, or visiting various museums around the city. Classes usually involved learning Russian cursive, practicing dialogues, and memorizing proverbs. The lunch after was always a great opportunity to explore new nationalities of food. The students went to Georgian, Moldovan, Russian and Uzbek restaurants.

AJ’s host family included a mom, dad, and two sisters who were studying abroad in 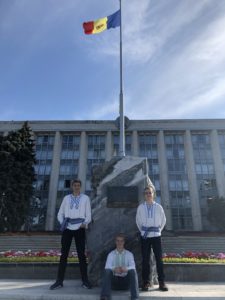 Greece for part of his stay. Even though AJ was only in Moldova for about two months, his host family made every effort to make him feel like part of it. He went shopping with his mom in the evening, occasionally helped cook and went on walks around the city with his host sisters. Whenever he had a problem with his homework, they were always happy to help and took time ensuring he understood what they meant even if in very basic Russian. 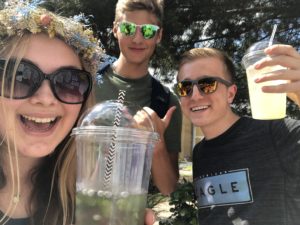 AJ made many memories along the way. He and the other students participated in many activities like attending the Moldovan Theater, celebrating at a summer harvest festival, and visiting historic sites. His favorite memory was spending time with the local high schoolers because they were not only eager to help but just as excited to help him improve his Russian and aid him in exploring Chisinau through the eyes of a local. The students were very dedicated to helping each other. AJ tutored a few of his Moldovan friends in English and they were quick to correct his grammar and pronunciation. One particular friend took him to an open market where she helped him negotiate and purchase antique pins from the Russian Olympic Games.

After returning to the states, AJ enrolled at Lawrence University and is currently studying Russian and Global Studies. He is very thankful for the opportunity he had to study in Moldova and hopes to someday return to visit or potentially volunteer there. His summer abroad completely reshaped how he viewed languages and the world around him. He left with a better understanding of what it meant to be a citizen ambassador: helping others, while studying their language and culture and representing his own home country. While his career path is currently unsure, he knows that it will likely evolve around something that utilizes his love for Russian language and culture. 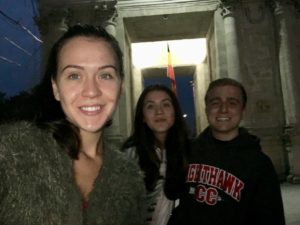