‘The Chai Guy’: An Alum’s Passion for Tea and Chinese Comes to a Crossroad

It all started with a high school social studies project on the tea growing culture of East Asia. Ben had had an interest for tea since childhood, but the styles and variations of Chinese teas opened up an entire world of possibilities he had never fathomed. To Ben, it wasn’t just a cup of tea. It was a centuries old family history, with growing techniques meticulously passed down through generations. Every tea told a story, and every story was a way of retelling history, uncovering a culture, and learning a language.

With this passion in mind, Ben departed for Taiwan on the 2012-13 NSLI-Y Academic year Chinese program to Kaohsiung, Taiwan. It comes as no surprise that one of Ben’s first interactions with his host family was over an affinity to tea and the brewing process. Whereas in the United States, the standard tea drinking procedure is to boil a cup of hot water and dunk a store bought bag of tea into the steaming mug, in East Asia, there is an intricate and detailed procedure behind every attempt. As he was delving into the tea culture of Taiwan, Ben met a host-family friend who taught him about tea varieties and ceremonies and showed him the way of the tea house, which are curated tea ‘cafes’ that specialize in tea brewing processes. These interactions epitomized the generosity and accommodating nature of his community. 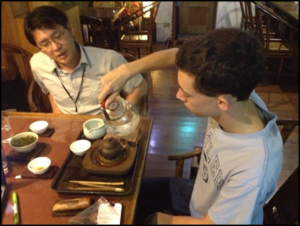 Ben’s Chinese language learning and cultural knowledge of tea ceremonies grew symbiotically. Logging his hours in the tea houses and soaking up information from local tea vendors, Ben was able to take theoretical concepts from class and apply them directly into the real world. His practical knowledge of Chinese strengthened alongside his conversational skills when he ventured out into his community. In Chinese, complex words can tell a story within a story by deconstructing their inner meanings. Ben was able to develop a richer appreciation for Chinese grammar by identifying the names of tea varieties, and reverse-engineering the names to find the vocabulary laying beneath the surface of the word. A win-win situation where he was able to understand tea varieties, by understanding vocabulary structures.After departing Taiwan, with a lifetime’s worth of memories crammed into nine months, Ben headed off to NYU Abu Dhabi where he majored in Media production and graphic design. He also continued his Chinese instruction at college, where he tested into intermediate level classes. Enhancing his Chinese language education, Ben attended the 2016 Critical Language Scholarship program, this time on Mainland China. 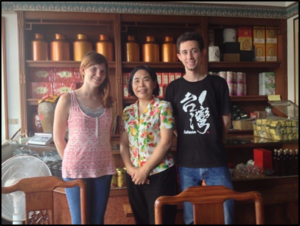 Ben at a tea shop near his host-family’s house in Kaohsiung, he learned a lot about Taiwanese teas here.

Ever since he stepped foot in his first tea house in Taiwan, Ben knew he wanted to be in the tea industry. It was just a matter of combining his video production skills with his passion for tea and the Chinese language. This all came to a head when he received an offer to work full time at the Red Blossom Tea Company as a filmmaker, graphic designer, and social media content producer. Ben had worked at the local San Francisco Tea company during his summers home from college as a store sales staff, which helped him gain a deeper grasp of tea variations. In his current position, Ben is a ‘jack of all trades’, providing advice to customers, creating digital content for the company’s YouTube page, and organizing group tastings and tea education sessions.

The Red Blossom store is located in the heart of San Francisco’s Chinatown. This has granted Ben a unique opportunity to utilize his Chinese on local speakers and tourists. One Chinese speaking tourist was so impressed by his Chinese abilities that she ran out of the store in shock! Another great perk of the job is that Ben gets to go on tea sourcing expeditions to China. During these trips, Ben has a chance to film content and meet with local tea growers, many of whom are part of a long familial line in the trade, and have perfected the growing technique. Rarely in these encounters do individuals speak English, so Ben is tasked with using his Chinese language skills to learn more about the product. This takes him back to his time in Taiwan on the NSLI-Y program, where he curiously enquired about the origins of tea leaf strains at the local tea houses. This was a real full circle moment for him.

Plotting his upcoming goals, Ben plans to perfect his craft and broaden his tea palate. He is currently designing a series of tea tasting classes to share his love with others. Ben is not sure what is in store for his future. Although whatever it is, he is sure it will incorporate Tea and Chinese. 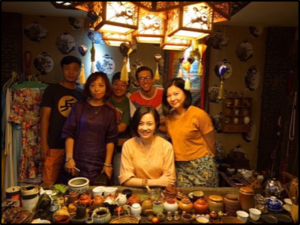 Ben posing for a photo with the owner of a local teahouse and her friends during his CLS program.
Previous Article Next Article