Elizabeth is from Bethany, CT and participated in the 2018-19 Russian AY program in Moldova.

It was mid-January and I decided to make my host mother some American chocolate cookies. The gooey, oatmealy cookies that my family made at home in Connecticut seemed to have no parallel to the sweets that I enjoyed in Moldova, and my host mom, in my opinion, deserved to try them.

So I pulled out the chocolate chips and the rest of the dry ingredients from where they were waiting in the suitcase under my bed. They were brought on a plane; I wanted to ensure that I had the American staples necessary. My host mom nodded her yes as I asked if she had a baking pan and opened a secret cabinet I never knew existed behind the mirror on the balcony. She rummaged in the cabinet, pulling out all sorts of things, and eventually grabbed what looked like a piece of sheet metal. “Here it is!” She announced, almost proudly. I thought about the potential other things in that secret, space-saving cabinet in the wall. She made me repeat the word for baking pan six times and was not happy with my pronunciation. Around her friends and mine, she complimented my Russian, but my accent is not great, and we both knew it in the comfort of the apartment. “The stress is on the first syllable,” she told me. “Roll your r’s.” I tried my best, as always, but after a few more tries, she left the kitchen, too small for both of us.

I mixed and stirred, managing to explode a bag of sugar all over the table when I tried to mix the brown and white sugar in the bag instead of taking out an extra bowl. My host mom came back into the kitchen. “What kind of cookies are you making?” “With chocolate.” I pointed to the picture of the chocolate chip cookie on the package of the chocolate chip bag from America. She looked at it. “Hm. Interesting.” She left again, almost definitely not believing that they would taste good. There were no measuring cups in the apartment, let alone those with U.S. measurements, so I guesstimated. I was kind of successful. I hoped. 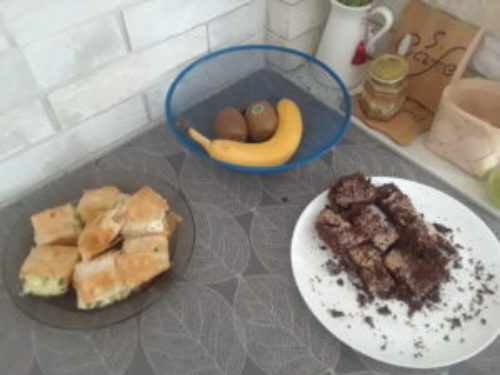 I left the kitchen, found my host mom watching the news, and asked her about the oven. She thought for a second when I asked her to turn it on. “I forgot to buy matches,” she realized. “It’s okay, though, we can just light it from the gas burner.” I followed her into the kitchen and she rolled up a piece of paper, stuck it in the stovetop burner, and pushed the whole piece of paper into the stove. A wave of fire leapt out. We both jumped back. She asked what temperature I wanted the oven to be. It was at this exact moment that I realized that I had forgotten to convert the temperature on the recipe to Celsius. As the fire leapt out of the stove and calmed itself, I typed the conversion into Google. I showed my host mom: 176.667 degrees. “Okay, maybe 8, I guess.” Eight? I leaned closer to the stove. The dial did not have degrees; rather, heat levels with no indication of what they corresponded to. As I waited eight to ten minutes, I checked on the cookies every 30 seconds, sent slightly frantic photos of the puddle-y cookies to my friends here and in America, and wiggled the heat level of the oven up and down.

So they came out slightly black-on-the-bottom. Crispier than I would have liked. But my host mom didn’t seem to mind. She asked me to translate my mom’s recipe into Russian, so she could send it to all her friends. And I, too, was proud. A cookie recipe should not be that hard, but somehow in Russian, in an unfamiliar environment, everything takes a thousand extra steps. I was lucky to have a support system in my host family and my family at home, in my fellow NSLI-Y participants. And that all of the difficulties in the language and changes in my life can be swept away by the pride over some slightly-burned chocolate cookies. I walked into my room after trying to feed her my cookies- an interesting role reversal from the woman who says I “eat like a bird.” On the whiteboard above my desk was the word for baking pan, written by my host mother, stress clearly marked. I laughed at the whiteboard, and fell asleep.