Aparna is from Madison, AL and an alumna of the 2019 Chinese summer program in Xi'an, China. 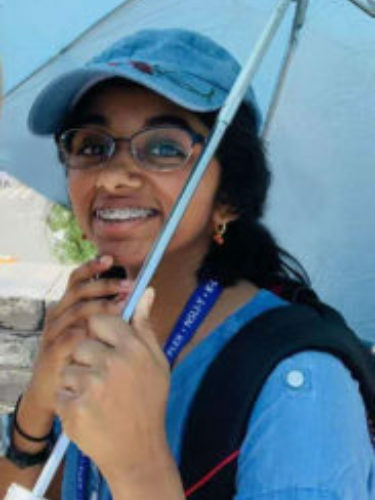 Huimin Jie’s labyrinthine avenues are studded on either side with food stands and assorted shops. Vendors call to the throngs of patrons who trickle past the stalls, and it is the sizzles and scents of their frying meats and doughs that dominate the environment. To turn one corner is to come upon the pair of confectioners who pound with wooden hammers a stubborn chunk of crystal candy. Continuing the stroll, one will soon come across the stalls that sell cups of jewel-colored ice cream balls. Further, still, there is the man who pulls white taffy using only his arms; there are the peach, strawberry, and blueberry tea sellers; there are the butchers whose pink meats hang from above his head. These are but a few of the worlds I observed in Huimin Jie, and I have not come close to exploring it deeply. Indeed, the one who walks every corridor, path, and bend of Huimin Jie is the one who watches hundreds of miniature worlds unfold.

My peers and I would often visit Huimin Jie after taking our afternoon meal together. (Our four-hour school days left us ravenous, and it was a poor idea to visit Huimin Jie on an empty stomach, as doing so would drain any tourist’s wallet quickly.) We would travel by bus together, playing Never Have I Ever or just chatting to pass the time, to one of the many entrances of Huimin Jie. It would always take us several minutes to find it, but soon, we would be standing in the middle of the crosshatched lanes thick with tourists and shopkeepers. 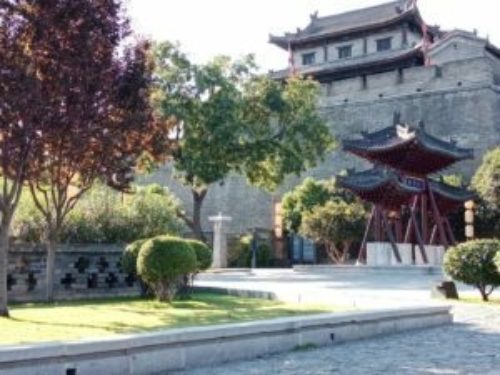 I always enjoyed these Huimin Jie trips, even when I did not buy anything. There was a certain air about the entire place - a homeliness that tourists who visit Huimin Jie, I believe, will understand. In the streets of everyday Xi’an, there are probably a few handfuls of locals who speak English, and even less who speak it fluently. Consequently, one may conclude that there are even fewer people who speak Spanish, French, Hindi, or some other language. This cultural and linguistic isolation is damning; one is surrounded by throngs of people but is unable to communicate with any one of them. This was a predicament in which I found myself often in Xi’an. Indeed, foreigners who speak your language have traveled to Xi’an, but their traces are few in such a grand and old city.

A quick trip to Huimin Jie was the remedy for this discouragement. Once confined to its walls, the evidence of people who speak your language is found. Walking through a single street in Huimin Jie for ten seconds may expose the ear to over ten different languages and one hundred different foreigners. I would smile fondly when I heard someone speaking rapid-fire Parisian French, or when I saw a traditional silk saree floating upon the silky black bricks of the street. My other American friends were quick to discover Spanish speakers and take them up in brisk conversation.

But I soon found that speaking each other’s mother tongue is not necessary for two tourists to connect. Simply being a tourist suffices; the sentiment of being marooned among the natives was common among us, and this was not difficult to convey. One instance of this occurred when I had just finished bartering for a necklace I had bought for my host sister. I was hoisting my backpack onto my shoulder when an elderly couple approached the stall.

“How much?” they asked the vendor, pointing to the necklaces.

They spoke with an accent I placed as some sort of Mediterranean lilt.

“你想要哪个?” the vendor asked. Which do you want?

“What?” they asked. The wife was irritated. “Speak English, please.”

“She is asking which one you want,” I told them, smiling. They returned my smile, and the wife held up a necklace.

I turned to the vendor. “他们要这个,” I told her, gesturing to the necklace they had chosen. They want this one.

“好，三十块,” she responded. Thirty yuan. I turned to the couple and relayed the information.

“But I can try and make it go lower than that,” I grinned. “How much would you like it for?”

“Ten yuan, please,” they said, and I turned back to the vendor, beginning to barter. I got the price down to fifteen yuan, but after that, the vendor did not budge.

“Thank you so much,” the couple told me after they paid the money and took the necklace. I hastily told them it was my pleasure before seeking out my American friends who had begun moving away from the vicinity.

After I found them, I felt a hand on my shoulder. I whipped around, ready to guard my backpack, but when I turned, I was met by the elderly couple I had left not a minute before. I smiled in relief.

“Hello,” the wife said, touching my hand. “We did not get to thank you well enough earlier.”

“Are you from India?” asked the husband.

“No,” I said, “I am from America.” I was not offended; it was a common mistake, and I had become desensitized to it in China, even if it still hurt to think that some did not hear my accent and instantly know that I was American.

The husband leaned back on his heels and grinned at me, laughing. “No, you are from Greece, now!”

“I am honored,” I told him, my heart swelling. “Thank you so much.”

Soon, I was swept away by my friends who insisted on going to one of the stores deep within the bowels of Huimin Jie. I followed them, waving goodbye to the couple before turning away. But I would think about the Greek couple for the rest of the day and marvel at that chance encounter.