Culture and Regional Security: From Kalinka to Kievan Rus’

Alexandra is from New York, NY and an alumna of the Russian 2020 Virtual Summer Intensive program.

On the last day of NSLI-Y VSI, I gave a bilingual presentation about the history of the Russo-Georgian War and ethnopolitics in the Caucasus. I had entered five weeks prior with zero knowledge of Russian beyond Duolingo Basics 2.

To be honest, I didn’t have high hopes for VSI. My spirits were low after attending virtual prom and graduation the month prior. I couldn’t imagine how an exchange program could be effective or immersive five thousand miles from Kirov.

I swallowed my words five minutes into the first lesson. “Приятно познакомиться. Я рада вас видеть и слышать,” I managed to say in response to a rapid-fire greeting from our speaking teacher Larisa, stressing the wrong syllables and butchering the palatalized consonants. From there, I was thrown into one of the most challenging -- but most rewarding -- learning experiences I have encountered. I bought a Russian keyboard cover and got to work.

We attended two hours of class every day: speaking with Larisa on Tuesdays and Thursdays, grammar lessons with Anna on Wednesdays and Fridays. Anna held optional sessions once a week, where we sang folk songs and talked about the best way to make varenye, a type of berry jam. There was peer tutoring twice a week with Elina, a teenager from Moscow who did her best to correct my pronunciation of the vowel ы (“Sasha, pretend you’re saying и, but someone’s punching you in the stomach”). I’ve always enjoyed the intricacies of grammar and syntax, often complicated in Russian and very different from English. But I relished in the intensity of our language training nonetheless. 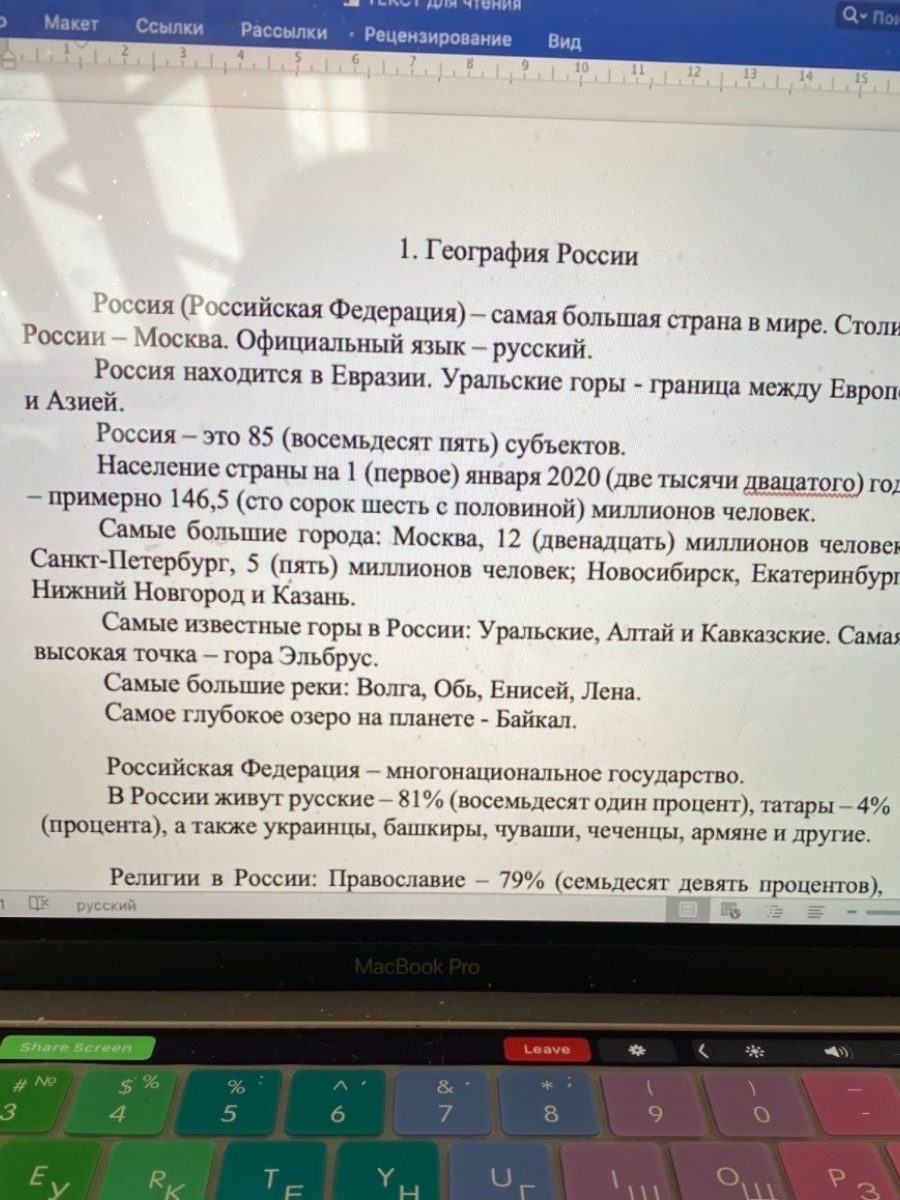 But my favorite days were Monday culture and history classes with Diana, which ranged in topics from Pushkin’s poetry to the history of Kievan Rus’ to the distinction between the terms русский [russkiy] and российский [rossiyskiy].

That distinction isn’t translatable into English. Google Translate says they both mean “Russian.” But русский [russkiy] refers to an ethnically Russian individual, while российский [rossiyskiy] denotes a citizen of the Russian Federation. Diana is российская [rossiyskaya], but calling her русская [russkaya] would be incorrect, if not offensive. She is татарская [tatarskaya], or Tatar, a Turkic group with a language unrelated to any in the Indo-European family. Tatars are one of 185 ethnic groups in Russia, referred to as a “nationality.”

During a meeting with a diplomat at the U.S. Embassy in Moscow, I asked if opposing viewpoints between America and Russia on topics such as Crimea ever influenced cultural connections, in their experience. Even over Zoom, I felt the tension in the meeting as it was explained how that sense of national identity in the word русский is intrinsically linked to history and geography, and how Crimea relates to that.

Identity is always complex and difficult to articulate. But there’s a different framework of identification in Russia and states of the former USSR than in the United States or western Europe. Terms don’t translate with their full historical connotation and gravitas.

We often view Russia -- if not the entire post-Soviet bloc -- as a monolithic, bleak landscape with brutalist architecture. But to do so is not only to undercut the rich cultural and ethnic diversity in Russia and surrounding countries, but to ignore an important aspect of regional security. It’s not possible to fully understand tensions in Chechnya or sovereignty in Crimea, for example -- and thus make appropriate and informed policy recommendations -- without understanding the historical precedent of identity as it exists in the post-Soviet states. Linguistic competence and cultural awareness is a crucial security issue. 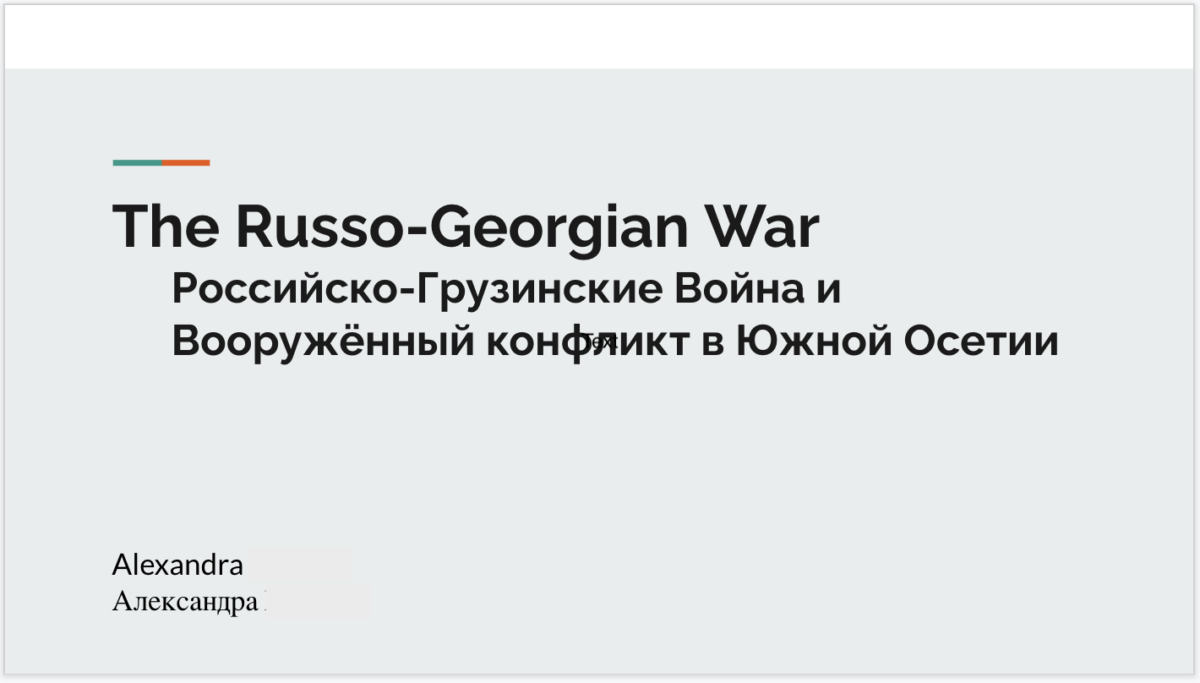 Coincidentally, on the last day of VSI, my university announced it would be moving online. At the last minute, I decided to take a gap year, with no idea what I would do.

Two months later, I’ve found that my NSLI-Y experience has profoundly shaped my direction. I’m interning at a startup that consults for companies in the national security sector. To continue learning about Central Asia, I signed up for Persian and Turkish classes while continuing to self-study Russian. NSLI-Y also reaffirmed my desire to major in international relations with a minor in Russian and Eurasian studies when I matriculate at university next fall, and equipped me to better engage with those fields of study.

My newfound Russian skills remind me daily of the importance of critical language study, especially given the recent events in Belarus and Nagorno-Karabakh. I’ve been able to follow Russian-language sources outside America, from government-sponsored newspapers to activist Twitter accounts, giving me an interesting look at other perspectives.

But aside from serious international issues of territory and conflict, I had an incredible amount of fun during my five weeks of NSLI-Y VSI. The camaraderie built while singing Kalinka on Zoom or trying to master verbs of motion in five weeks is unshakeable. I’m extremely grateful for my newfound friends from Kirov, Moscow, and across America. Большое спасибо нашим учителям Анне, Ларисе, и Диане, а также AFS-Россия, AFS-США и NSLI-Y! 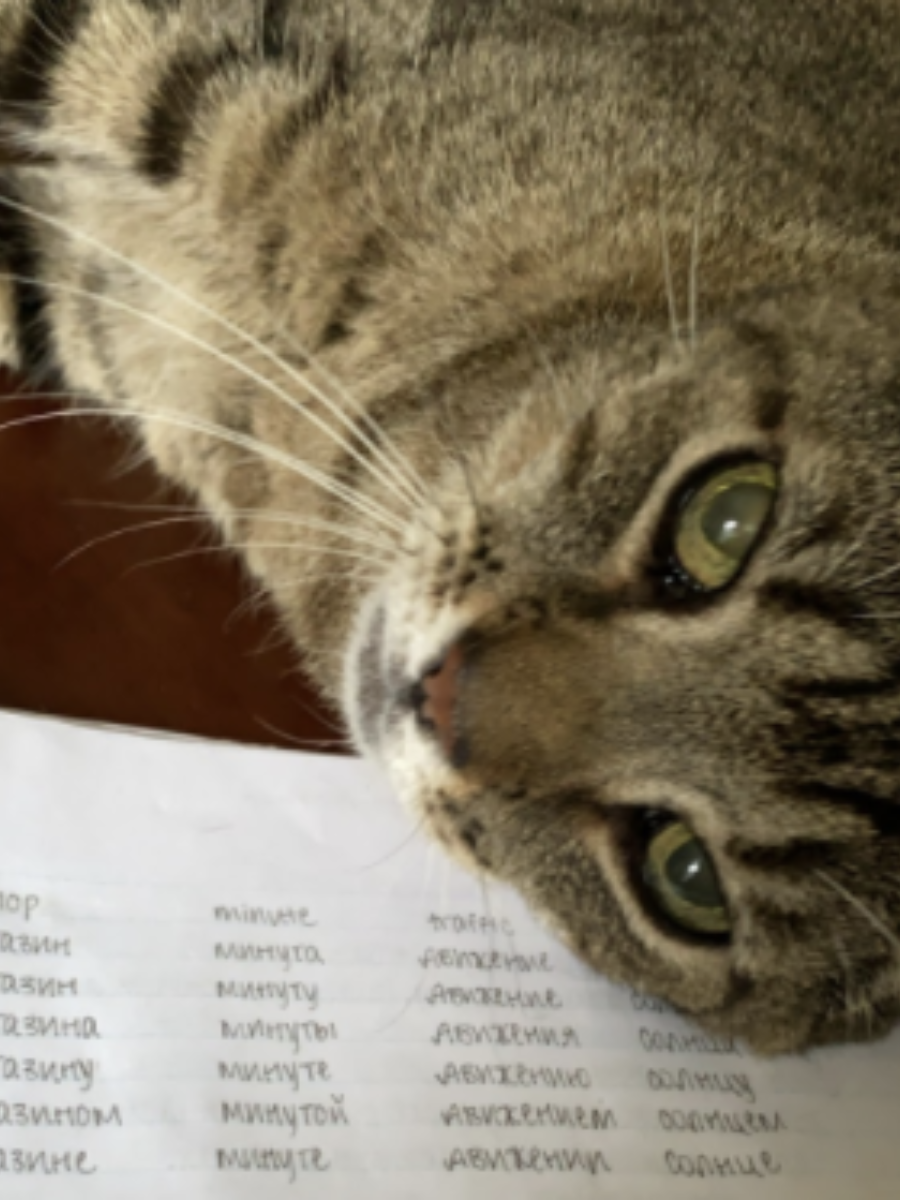