From Tears to Turmeric: My NSLI-Y VSI Journey

Tania is from New York, NY and an alumna of the Arabic 2020 Virtual Summer Intensive program.

With my fingers stained orange with turmeric, I lifted my computer and pointed the screen to a pot of boiling carrots, sweet potatoes and tofu.

“Does this look okay, Ustatha Raja, should I add more water?” I asked.

“Jayed, Talia. Make sure to cover the pot.” Her smile was encouraging.

One might wonder how I—someone whose go-to dinner is a plate of scrambled eggs—came to be juggling three dishes: this stew, sautéed onions, and multi-colored couscous. The short answer is simple: through my teacher’s decision to spend the penultimate night of our Arabic class cooking a Moroccan dish. The long answer, however, goes back much earlier in my life. 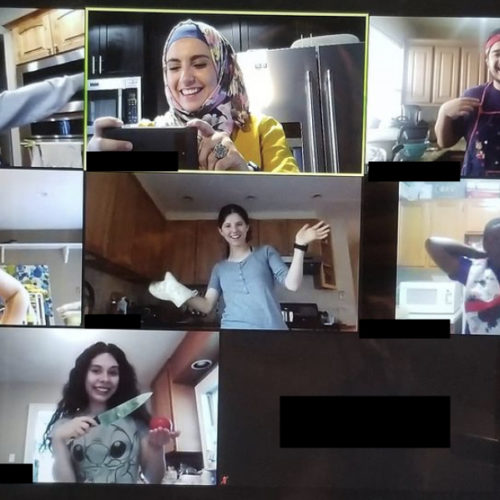 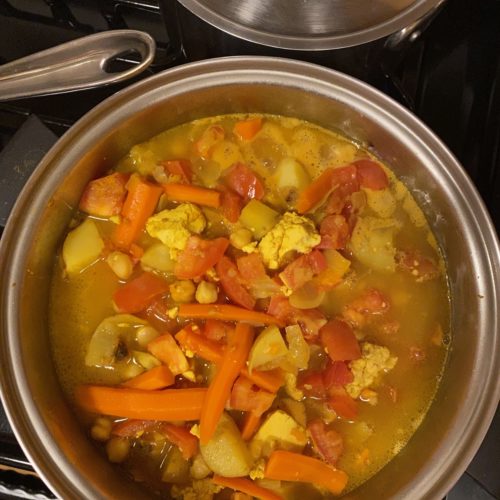 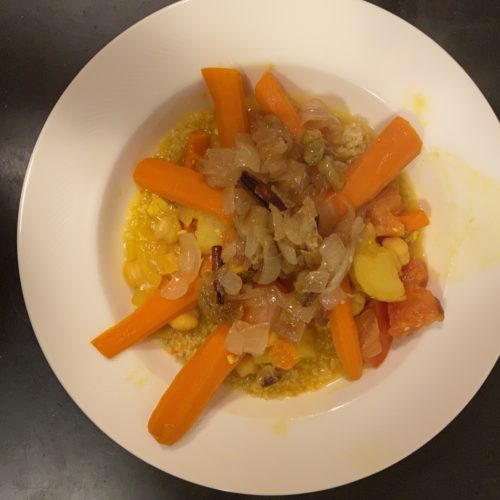 I grew up attending a school in which everyone proudly sported blue-and-white apparel on Israel’s Independence Day and where we were taught about Israel’s virtues. When I moved to public high school, the conversation shifted. My peers referred to Israelis as colonialists and to the country as an apartheid state. These comments bothered me. Eager to learn more, I combed my family’s bookshelves, first reading Daniel Gordis’ Israel, then making my way to Ari Shavit’s revisionist My Promised Land. This book introduced me to aspects of Israel’s history—like the expulsion of Arab residents from Lydda in 1948—that my middle school had taught me close to nothing about. These books whetted, rather than satisfied, my interest, and I realized that without being able to speak with Palestinians and read Arabic newspapers, I would never be able to fully understand the perspectives of Palestinians. So, I applied to NSLI-Y to study Arabic over the summer in Amman. The pandemic, of course, changed that plan: rather than living in Jordan, I found myself learning Arabic from my bedroom.

When NSLI-Y began in early July, 6 p.m. immediately became the high point of my day. As squares popped up on the Zoom screen, we greeted each other with the traditional “assalamu alaikum,” meaning “may peace be upon you.” We continued, asking each other “how are you?” in Arabic and responding with “alhamdulillah,” which translates to “all praise to god” but colloquially means “all is well.” (I noticed that “baruch hashem,” a Hebrew phrase, is used in the same way.) As our language skills improved, we grew closer as a group, dragging our fingers from our eyes to our chins, the Moroccan way of alluding to tears, when the class ended.

Still, studying Arabic challenged me. Initially, I struggled to wrap my head around each letter taking on one of four different shapes depending on its position in a word. Encountering this obstacle was as if a wave had swept over me. But, after hours of practice, I swam up, gasping for air. Now, able to differentiate every letter of this new alphabet, I began diving into every wave that came my way. And precious seashells—our culture lessons on Friday evenings—washed up from these waves. Learning proper household etiquette, such as a man coughing before entering a room to announce his upcoming presence to women, gave me new insights into the intricacies of Arab culture.

Beyond the classroom, NSLI-Y introduced me to an opportunity in which my role has been flipped: I now teach English to Doaa, a Syrian refugee living in Amman. While officially I am tutoring Doaa, I learn as much as she does from our conversations. We have discussed topics ranging from the differences between Jewish and Muslim prayer positions—while Jews only bow on their knees once a year, Muslims do so every day—to the similarities between our quarantine experiences. I am looking forward to, one day, not only meeting Doaa in person, but also interacting with Palestinians, Jordanians, and Moroccans directly.