Justin, a NSLI-Y summer 2017 student in Chinese, found an immediate application of his study abroad experience when he returned to the U.S. And it wasn’t speaking Chinese. Three days after he returned from China, his family moved from New Jersey to Oregon. Justin, who had lived in the Philadelphia area all his life, was literally uprooted halfway into his high school career.

But that was a familiar feeling for him, having lived for six weeks in Nanjing, China. "I was ready for everything to shift because I accepted and understood what could come from the struggle to adjust," he said. "The skills I acquired through NSLI-Y — the cultural nuances which you have to pay attention to when learning a different language and also the mindset of being open to new experiences and the failures that come with it — were exactly what I needed."

Before moving to China to study Chinese, Justin had never traveled outside North America. And though he comes from a half-Vietnamese, half-Cambodian household and attended Chinese classes on the weekend, he spoke little Chinese. On the bus ride into Nanjing from the airport, he recalls marveling at how a fellow NSLI-Y student was comfortably carrying on a conversation in Chinese with someone in the Chinese welcome party. "I had no idea what was going on," he remembered. "I was lost."

But things started happening fast on the ground in China. Not only did NSLI-Y’s intensive approach help Justin quickly improve his command of Chinese, but everyday interactions could be mind-boggling. One day he was returning to his host family’s apartment with his NSLI-Y resident director. The security guard at the apartment complex, who rarely budged when Justin passed alone, suddenly jumped to attention when he saw Justin with a white-faced stranger and started questioning the pair. "I saw racial dynamics from the other side: from being a member of a marginalized group in the U.S. to being able to pass as the majority in a certain context," he recalled. "It forced me to realize there is so much to learn from that [feeling] of discomfort."

That kind of realization through gaining a different perspective is informing Justin’s course of study at Stanford University, where he is currently a junior studying Human Biology and Political Science. While focused on the effects of climate change on human populations, he discarded thoughts of becoming a lawyer or policymaker and instead hopes to work in the health field. In talking about how inequality manifests itself in social experiences and biologically in lived experiences, Justin cites the example of disease and ill-health stemming from environmental factors that put certain less privileged groups at greater risk. 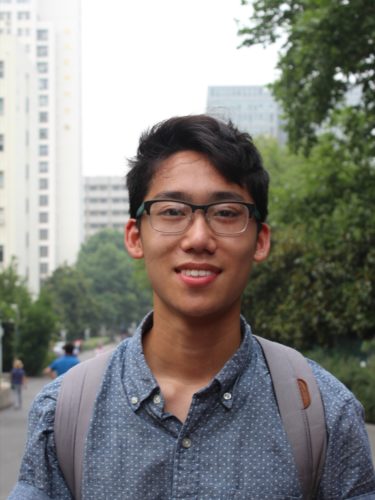 And where does his knowledge of Chinese fit in? Right in, he says, given the changing dynamics of the global order. He envisions himself collaborating directly with Chinese counterparts working on similar issues. "Chinese language will be crucial because climate change is a global issue that has to be tackled from the point of view of infectious diseases, natural disasters, and resource allocation."

Even in his spare time at Stanford, it seems that NSLI-Y pulls on Justin. He sings in an acapella group called Talisman, which performs world music that tells stories through song. The group, which performs songs in numerous African languages, Spanish, and Chinese, was recently featured on NPR’s Morning Edition singing “Lift Ev’ry Voice and Sing.” Click here to hear the whole song by Talisman.

For future NSLI-Y students, Justin has a few pieces of advice: In the experiences you seek out on program, take time to understand why people think the way they do rather than trying to reinforce your own convictions; break your daily routines on program that you cling to; open the door to something new; and realize how privileged you are to study abroad on U.S. taxpayers’ dollars.

Indeed, to "pay back" NSLI-Y for his memorable experience in China, Justin has worked as a NSLI-Y Alumni Representative, helping build a tight alumni community and informing potential exchange students about NSLI-Y. When he does talk about his experience, he remembers that bus ride upon arrival in Nanjing when he couldn’t follow his friend talking with the Chinese coordinator. And then he remembers his ride to the airport at the end of six weeks of intensive language study. "I was the one who was talking to the coordinator," he says with a smile.