Caroline is an alum of the 2021 Korean summer program. This story was submitted as an entry to the NSLI-Y 15th Anniversary Storytelling Competition. 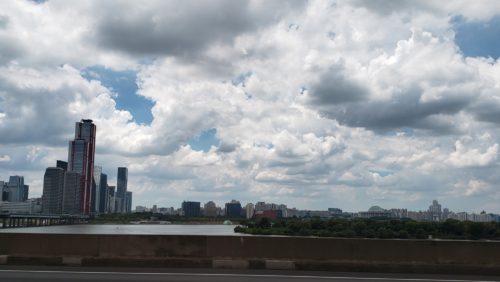 “It would’ve been nice if I kept working. But for Kyung, I couldn’t. It was a mother’s sacrifice.”

Muted summer moonlight shimmered across the Han River as my host mom told me this. I called her Imo (이모), Korean for aunt — specifically, sister of one’s mother. As we strolled along the river under the hushed hum of a half-asleep Seoul, Imo’s kindergarten-aged son, Kyung, remained several strides ahead of us two. He walked with my host dad and cousin, constantly daring them to race him.

I racked through my limited Korean vocabulary for the right response. “But why did you have to stop working? What was your life like before Kyung?” I asked.

“Well, I studied hotel management in college and worked in hospitality after graduating,” Imo started. Seeing my puzzled gaze, she pulled out her Papago app and translated “hotel management” to English. I nodded in understanding, and she continued. “I liked my job. Oh, and the company dinners (hoesik (회식) is the term for these company dinners) were so fun! You could eat and drink all you wanted, and someone else would pay for it all.”

I smiled, easily imagining bright-eyed Imo as the life of the party at hoesik ( 회식).

“But I paused my career after Kyung was born because your host dad and I felt that Kyung needed full attention from at least one of us. A child’s early years are so important and so tiring. We don’t just have to take care of him; we also have to drive him to preschools and hagwons, have to find friends and places to visit to stimulate him.” I thought of all the hagwons, or after-school academies, at which Imo and I had dropped off Kyung: English, math, soccer, taekwondo...

“Most of all, we needed him to know that we loved him more than anything else in the world. Koreans work very hard for very long hours. Kyung might not be able to feel our love as much if we both arrived home exhausted. We wouldn't have the energy to play with him all the time. So I stayed home to take care of him, and your host dad kept working.”

For Imo, one year had turned to two, to four, to six, and a career break eventually became a career end. All for her son.

I was awed by Imo’s sacrifice, her selflessness, her seemingly endless capacity for patience and love and courage when it came to her son. Imo had mentioned previously that her desire to enrich Kyung’s worldview with diverse cultural perspectives was what had motivated her to host me in the first place. For Kyung, she and my host dad welcomed into their home an American high schooler whom they’d never met before and treated me like family — all amidst a global pandemic.

“I never realized how difficult motherhood was,” I said. “You’re an amazing mom. Kyung is always so happy, and it’s all because of his parents.” I paused. “I don’t think I’ve ever thought about how much my mom changed her life for me, too. She also stopped working to raise me.”

Imo smiled gently. “We do our best. And lots of kids don’t think about what their parents gave up for them, but it’s because we’d give up anything for them. If Kyung is happy, then I’m happy. That’s all I need from him.”

Thoughts about my own mother suddenly rushed through me like water through floodgates opened for the first time in 16 years. My mother, who crossed the world from China to America to become an engineer. Who studied her way to the top of her classes. Who stopped pursuing her PhD and career aspirations after I was born. Who had stopped not because she wanted to, but because she felt she needed to — for me.

My mom had essentially halted her entire world to nurture me into the best version of myself possible and to accompany me at every step of my journey. I wished she could have continued following her professional dreams, yet I also felt endlessly grateful for the foundation she built for me to become the person I was today.

I could only smile back at Imo, unable to express all the emotions pouring through me. Behind Imo glittered the Han River, and behind that the lights of Seoul’s financial district skyscrapers. Maybe Imo used to work at one of those.

Eventually, Kyung grew tired of his racing game, and Imo and I caught up to the boys.
“What are you chatting about?” my host cousin asked.

***
Ever since that nighttime walk along the Han River, reflections on our “girl talk” had ricocheted through my mind and painted all the interactions I observed with my host family. Whenever Kyung whined, “I’m bored!”, Imo always found him books to read or educational shows to watch; the only solution I could ever conceive of was letting him play Among Us on my phone. Imo prepared meal after meal in the kitchen every day, hot and steaming and greasy in the already muggy summer of Seoul. When Imo taught me to cook Korean beef pancakes, she couldn’t help but giggle at my tense grimace, my flinches at the slightest crackle of frying oil. I recalled how exhausted I felt after doing my own laundry in 80-degree humid heat for the first time, then marveling at how Imo folded pile after pile of clothes for the whole family every week.

These little moments made me realize that being a mother was the hardest job I could ever imagine. School taught you about equations, logic, and rules that always produced a valid answer; they never explained how to raise a human being to be a positive contributor to society. Professional careers were tiring, of course, but at least you had instructions, deadlines, and processes that made clear when you succeeded and, if not, how you could improve. Nobody provided the instructions or the answers in motherhood. 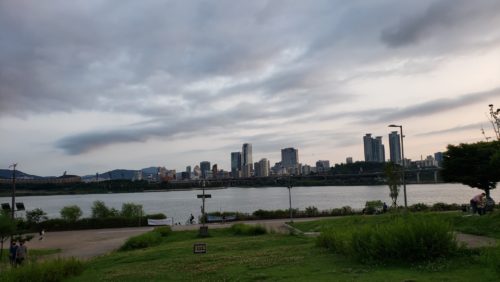 Somehow, I’d never realized or appreciated all the sacrifices my mom in America made to raise me until I saw my host mom doing those things for her son. I said thank you to Imo for every meal in Korea but rarely did so to the mother who had cooked for me ever since my birth. I would've never imagined replacing one of Imo’s carefully crafted dishes with a Trader Joe’s frozen meal, and yet I’d done just that with my mom’s cooking when it didn’t suit my palate. Offers of cut fruit during study sessions, of taking walks together, of studying languages together — why couldn’t I have accepted these more earnestly back home?

Several weeks passed, and I eventually found myself on a plane back to America, back to “home” home. My mom picked me up from the airport, and I jabbered endlessly to her ever-listening ear about becoming closer with my host family, meeting new friends, and slowly but steadily building up my cultural and linguistic knowledge.

“I’m proud of you,” she replied with smiling eyes.

My mom didn't say those four words very often, so whenever she did, I knew she meant them. I wanted to tell her that I was proud of her too for being such an extraordinary mother and for helping me become a daughter whom she’s proud to call her own. I wanted to tell her that I would sprint to the ends of the earth to give back a fraction of what she gave up for me. However, as a jet-lagged teenager fresh off an 11-hour flight, I couldn’t even begin to express my admiration for everything she’d sacrificed for me.

So all I said was “Thank you.”