Angela is an alum of the 2021 Korean summer program. This story was submitted as an entry to the NSLI-Y 15th Anniversary Storytelling Competition. 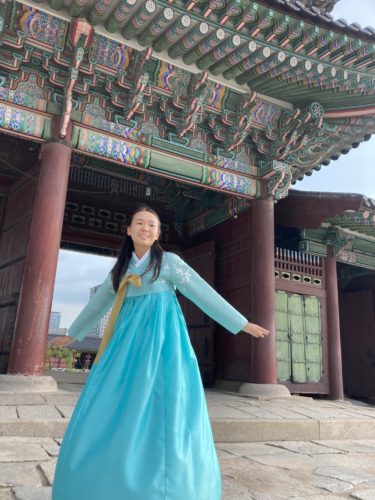 "Bring me one, please." The 아줌마 (Korean term for a middle-aged woman) running the stand hung up the phone, waving her hand for us to sit on the bench.

I turned around to glance at Remi. Were we really about to do this? We carefully slipped between the counter and the small bench that lined the stand.

Not long after, a man arrived with a white plastic bag. The 아줌마 took the bag and immediately poured out its contents.

"Now is your chance to take pictures," she said with a grin as she held the squirming thing up. Her eyes prickled with amusement. Because we were constantly wearing a face mask, I seem to have unconsciously become the master of letting my emotions be shown purely through my eyes and eyebrows. And at that moment, my eyes and eyebrows were in pure shock.

Chop. Chop. Chop. Each section of it was slowly curling, fighting against any bit of common sense I had. Was I really about to do this? I quickly shut down any thoughts of doubt. I had done so much to come here. There was no going back now.

She set in front of us a simple white plate. 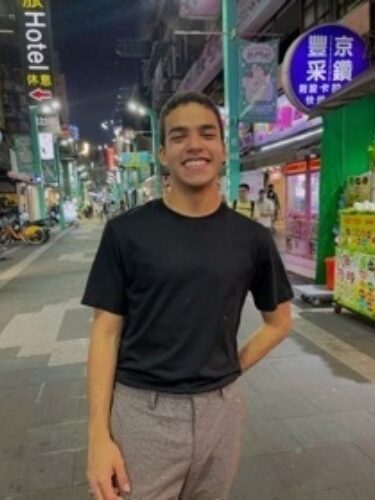 Despite being cut into one-inch pieces, each tentacle was still crawling around on the plate.

"잘 먹겠습니다! (We will eat well!)," we said subconsciously, already a habit engrained from a week of being in Korea. I started laughing nervously as I picked up the chopsticks to grab the first piece.

The 아줌마 handed us a small dish of red sauce. "Dip it in this sauce. It will be more delicious".

My eyes naturally drifted up to her as I seemed to ask for final confirmation if I should eat it. Her kind, caring gaze as we made eye contact suddenly reminded me of the 할머니's (grandma) who had helped me when I had become lost on the way here. After anxiously waiting on the subway that had stopped for 15 minutes, I realized I had made a grave mistake. I rushed out of the subway car, desperately refreshing my phone yet again to see if I could manage to get access to WiFi. Still no connection. My heart started pounding. What was I supposed to do now? Desperately looking around, I spotted an elderly lady was walking down the stairs.

"Excuse me! Do you know how to get to the Gwangjang market?” I asked. The 할머니 paused in her steps and looked at me with those same eyes of concern and kindness that this lady at the stand was.

I was suddenly pulled back to reality as I felt the suction of octopus tentacles on the inside of my lip. My look of pure panic must have been obvious as Remi started laughing and the 아줌마 also let out a chuckle.

I was not taking any risks. I had heard stories of people dying from eating 산낙지 and I had no intentions of being another one of them. I sat there, chewing until I felt sure the octopus would not somehow choke me when I swallowed.

Maybe it was the worry of death that spurred this thought- but sitting there in the middle of the bustling market with a stranger and a newly made friend from across the United States laughing with me and a living, squirming octopus in my mouth, I felt like I was alive. I was a part of something, and I was thriving.

I mattered. My actions affected everyone around me, even little gestures. Little gestures like standing on the right side of the escalator, forming lines outside the subway door even when no one said to, and smiling through a face mask to connect with people. While at first, it felt burdensome to need to reach out to people, other people were reciprocating the connection. We were seen. We were there. We were a part of a community greater than ourselves. The world was rushing around us, food vendors shouting and cars zooming by outside, but we were there.

Bowing and saying our "잘 먹었습니다"s (Thank you for the meal!), we left the stand to go explore the rest of the market. Despite being hopelessly lost, each step was one of excitement and anticipation. Each moment was a new learning opportunity, filled with new foods and people and stories. We were so lost that we passed by the same worker giving out samples two times, rejecting him each time. By the third time, he pleaded: "For the third time, would you like to try some?"

We were lost, but alive.

On this trip to 광장시장 (Gwangjang Market), for the first time in my life, I felt incredibly lost and alone. I had become so accustomed to my life at home. I had my reputation as a leader in my community, a dedicated student at school, a hardworking teammate. I knew my place. But here, I was none of those. Without those, who am I?

I am an adventure seeker who is open to new experiences. I would have never guessed that I would be eating live octopus, but there I was, savoring every terrifying bite.

I am a student always looking to learn. While waiting for the subway to begin moving again, I was determined to learn the vocabulary on the subway signs. Thankfully, I found out that 특반 meant "special train" and that it was about to take me back to the airport outside of Seoul. Always be curious, especially when information is crucial.

I am a confident communicator not afraid of making mistakes. Speaking in a foreign language is always a nerve-wracking experience, but I had the courage to hold conversations with the workers and to ask for directions. I was running the risk of embarrassment, being judged, and awkward misunderstandings, but I was not afraid.

But perhaps most importantly, I am a global citizen. Never before had I ever been so dependent on other people, much less on strangers in a foreign country. But by being respectful and open-minded, the world suddenly becomes a gorgeously kind place.