Hi! My name is Katie and I am a NSLI-Y Alumni Rep. From April 29 to May 1, I participated in the NSLI-Y Storytelling Workshop in Washington, D.C. alongside fellow Alumni Reps and NSLI-Y alumni who won the storytelling competition. I'm here to tell you the story of the workshop, hopefully in a way that reflects what I learned about telling a compelling story.

Friday was the first day of the workshop. Alumni Reps from across the country-- from the swamps of Florida to coasts California-- made their way to the American Councils office in Washington, D.C. by train, plane, or car. Alumni gradually gathered at the office, meeting each other in-person for the first time. As a second-year Alumni Rep, it was my first time meeting other Reps in-person that I have been working with since January 2021.

After alumni met one another and settled in, they had some time to rest before the first workshop session of the day. Around 4:30, the American Councils office once again hosted the alumni participants as they met for an introduction from the Department of State. Students had the opportunity to meet with and ask questions to a former Foreign Service Officer who also had experience working with the UN and in other governmental posts.

This session was followed by a brief but nonetheless engaging introduction to storytelling. Specifically, we learned how to make powerpoints and graphic designs that would engage our audiences. Participants were tasked with using a website that automatically makes complementary color combinations, and were then asked to make a combination that represents who they are (of coruse, giving it an intriguing title as well). Some participants went for pastel whereas others picked the boldest hues known to man. Titles ranged from "Summer Pastel", which showcased a soothing combination of serotonin-producing pastels, to "An Alligator Sitting on a Log in the Sun as a Banjo Plays in the Background", which brought to the table eye-burning greens and yellows reminiscient of a Florida swamp. So, in the future when you see intriguing groupings of colors that go together surprisingly well on the @nsliyalumni Instagram account, you will know the website behind it.

Participants also learned the significance of .png's, videos, and gifs in powerpoints.

Following these afternoon sessions, alumni feasted on some American-style food at a restaurant in the area and headed back to their hotel for rest. 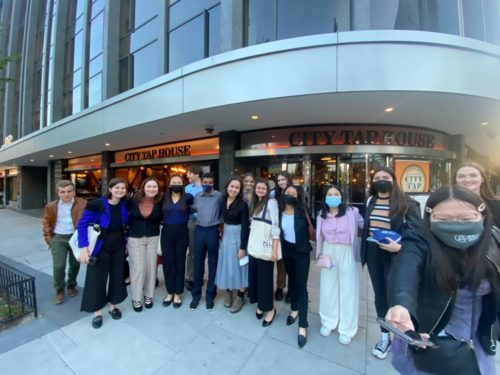 Alumni were greeted by a bright and early morning wake-up for the Saturday workshops sessions.

This portion of the workshop was led by members of The Moth. You may have heard of this organization; they are a non-profit that hosts events and leads a radio hour through which people can tell a story. Through this workshop, Moth members would teach NSLI-Y students how to craft a compelling story (about their NSLI-Y experience, specifically).

The session began with a viewing of a Moth-style story. Moth members acknowledged that storytelling is a centuries-old tradition that varies across cultures and communities, and went on to present their specific method of telling a story with that in mind. Moth stories are in the first-person and tell a personal experience and also have stakes and a theme. As we watched an example story, we were encouraged to brainstorm our own ideas for a story.

We soon broke off into smaller groups, each led by a Moth representative. In these smaller group sessions, we decided on our own story topics, developed and added details to our story. and practiced telling it to our group. This served as preparation for the coming day, in which participants' stories would be professionally recorded.

Returning to the larger group, participants had the opportunity to share their stories. Stories revolved around themes like the host family and student relationship, others documented what it was like to have acne abroad, and one described how learning Korean through NSLI-Y allowed a student to form a better relationship with their boss. 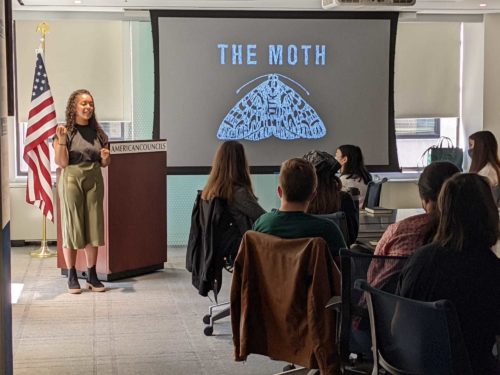 Following these afternoon sessions, students learned about storytelling in some slightly unconventional ways. In specific, a ghost tour was part of the agenda for Saturday afternoon.

However, before the ghost tour, a trip the the White House and other famed monuments of D.C. was in order. We walked to the White House, the Washington Monument, the Capitol, and other well-known buildings in the area before meeting with our ghost tour lead at dusk.

They held a small lantern for effect and spoke in a wavering tone that added to the ghastly ambience. The tour revolved around telling the stories of the buildings in the area and the ghosts that reside in them. I learned about stomach problem-causing ghouls that reside in the Decatur House (some who dare enter the house leave with internal bleeding?!) and about the somber presence of Dolley Madison as she haunts her old residence. 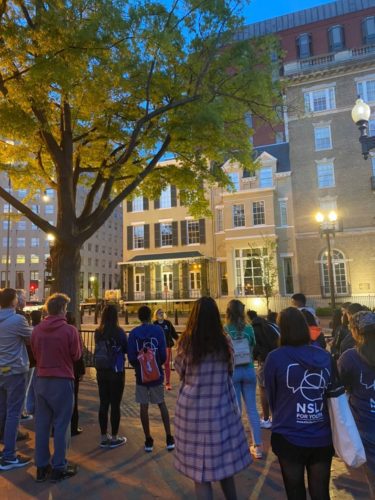 After the ghost tour, students returned to their hotel and had some free time.

On Sunday, the alumni had their stories professionally recorded. Each story was roughly between four and seven minutes. Topics varied and each participant told a story relating to their NSLI-Y experience. Keep an eye on NSLI-Y social media in the future to see these stories!

Throughout the day, alumni departed for the flights, trains, or car rides home, pledging to one another that they would one day meet again. 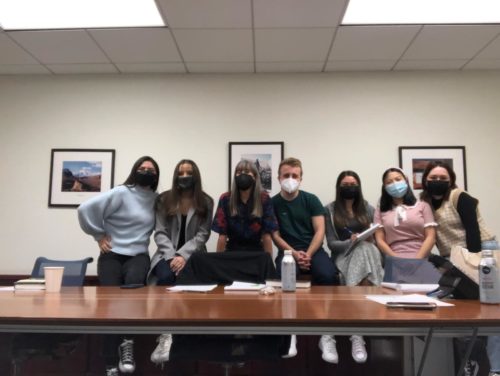 If you want to learn more about how to tell your own NSLI-Y story, check out THIS document with some tips and tricks for submitting to the Interactive. I hope to read YOUR story on the Interactive soon!