Alumni Spotlight: Isabella Baker Reflects on her Journey from NSLI-Y to Fulbright ​

NSLI-Y alumna Isabella Baker has continued her Russian language study and engagement. Isabella is an alumna of the 2016 Russian Summer Program in Chisinau, Moldova. Upon completion of her program, Isabella attended American University, where she received a Bachelor of Arts in International Affairs with a minor in Russian Language and Area Studies. During her time at AU, she completed a short-term study abroad program in Russia, presented research regarding economic and security concerns between Moscow and Transnistria, and served as a Research Assistant regarding Russia and Transnistria. She gained vast experiences through interning, both in the United States and abroad, including internships at the U.S. House of Representatives, the Department of Defense, the National War College, the U.S. Embassy in Prague, the Department of Justice, as well as the Department of State’s Permanent Mission to NATO in Brussels. Isabella is currently serving as a Fulbright English Teaching Assistant in Moldova. Upon completion of her Fulbright grant, she will pursue her M.A. in International Security at Sciences Po Paris. 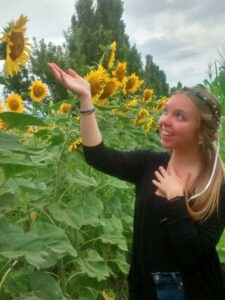 Isabella first became interested in Russian when thinking about her future career. In high school, she was curious about pursuing a career in the Foreign Service and studying diplomatically crucial languages. When she was considering applying, relations between the U.S. and Russia were becoming increasingly tense, so the time seemed right to study Russian. After beginning her Russian studies, she quickly fell in love with the language, the culture, and the history of the Kievan Rus. Among many happy memories from her experience on program, she details an experience at an art market in Chisnau during her final week as her favorite: “I was hunting for souvenirs and found a row of outdoor art booths. Markets like this tend to be run by older ladies- бабушки- who cluster and chat together until they spot someone wandering into their section. When I leaned in and saw this dreamy, nostalgic painting of a little boy holding a flower behind his back for a little girl, the vendor approached, and we started a conversation. Her son painted at night and worked normal business hours while she represented him in the art world and haggled to support them both. It was the culmination of my Moldovan experience that I could understand their story, share a bit of my own when the circle of ladies came over to listen, and hang up the painting as soon as I got back to North Carolina.”​

Isabella has noticed many lasting impacts of her study abroad experience. First, she learned to be more willing to step out of her comfort zone when learning a new language and not be afraid to make mistakes. She notes, “After making it through the awkwardness and mistakes of being a true beginner those first few weeks, everything else is either a breeze or a learning experience!” Additionally, Isabella has perfected her elevator pitch, after experiencing constant introductions and impromptu community gatherings where folks were curious about the American living near them. When making new connections, she always summarizes who she is, where she's going, and why she's excited to be there. Isabella notes that her NSLI-Y experience in Moldova and her internships with the U.S. and E.U. government institutions have taught her how to work with colleagues from around the world on security issues. If she pursues a life and career abroad, she now feels comfortable being surrounded by different senses of humor, etiquette styles, and workplace expectations. All of these, she believes, have reduced her self-doubt and opened new doors for her. ​