Becoming Part of an Indian Family

At age 11, Presley moved with her siblings from her home in Indiana to Ghana, her parents’ birth country, where she lived with her grandmother and attended school for four years. She spent her free time watching many Bollywood movies, which sparked an interest in traveling to India someday.

Fast forward to high school and an after-school program in downtown Chicago, Metro Achievement Center for Girls, Presley found her opportunity: NSLI-Y to study Hindi. Although originally selected as an alternate, she was eventually selected for the Hindi summer program in Indore, India. 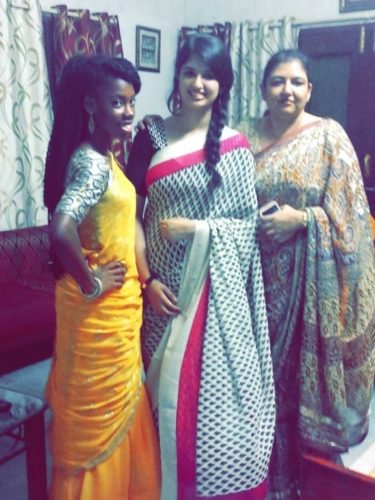 Presley says her teachers and host family helped lessen the difficulty of the first couple weeks on program. “There were some ups and downs with the food. I got sick here and there.” She learned she could go to her host mother with concerns. Her host mother aided her language acquisition significantly. “My host mother would always ask me in Hindi what I learned that day and in the last two weeks of NSLI-Y said, ‘From now on I’m not going to speak in English. You have to speak in Hindi now. […]The house help also helped me: she didn’t know how to speak English and she would make sure that I respond to her in Hindi. […] I also built a good relationship with my host grandma, who doesn’t know how to speak English. By the end of the program, I was able to say a few sentences to her; she was really grateful for that.” 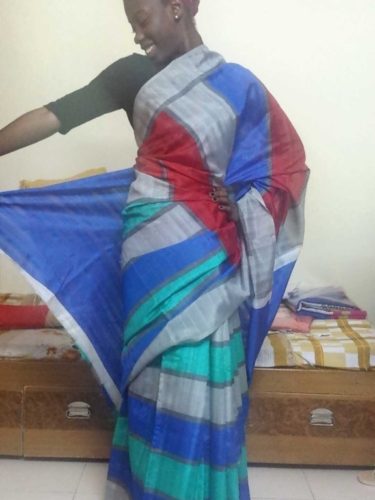 In addition to language learning, Presley learned some cultural differences. “I learned you’re not supposed to give a lot of people hugs. I would say ‘Please’ and ‘Thank you’ a lot, and it’s not common to do that in India. There isn’t an expression for ‘You’re welcome.’ […In addition,] I got a lot of stares. People would stare at my braids and come up and touch them. That was very uncomfortable.” But through speaking with her host family about this, she learned that these were innocuous actions spurred by Indians’ curiosity. She learned to tell these strangers, ‘Let me know that you want to see my hair.’ “I thought I wouldn’t be accepted overseas because of my skin tone and religion. […] I’m a Christian and it’s totally different from Hinduism.” She was able to ease these concerns through a pre-departure talk with her host sister who assured her she would be accepted. “They were really open to my religion and I was open to theirs. I was willing to go to their temples and see how they worship. […]We went to Hindu temples, which were so beautiful.” 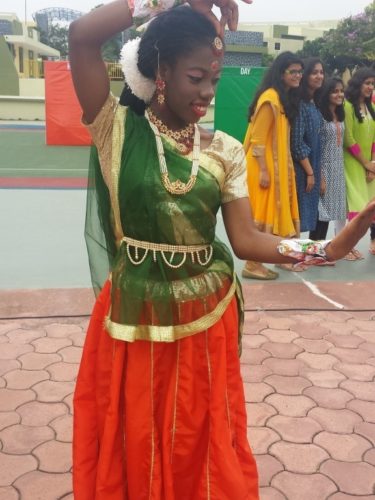 “AFS and NSLI-Y did really well in placing me with my host family. We had a lot of things in common. They were absolutely amazing. They treated me as their own daughter.” Her younger siblings affectionately called her “Presley Bibi” a term for ‘older sister’ and her host mother taught Presley about Indian food and spices, which were some of her favorite moments on program. In return, Presley shared some of her culture, teaching her host mother and sister “Azonto,” a popular Ghanaian song and dance. She spent mornings with her host father who helped her decipher some of the Hindi newspapers. She watched Hindi shows and movies and listened to Hindi music with her host sister.

To NSLI-Y participants from a similar background, Presley advises: “Don’t go overseas with high expectations. If you have a [negative] situation, open up to someone [about] your situation. Whatever you have, be content with it. If it’s not up to your needs, find a way to be satisfied. Most of the Indian families understood us really well. Don’t exclude yourself from your host family. Find what you have in common. Make the best of what you have.”

Presley is a high school senior and applying to colleges. She wants to major in international relations and plans to continue studying French. She will also look for further options to study Hindi. In the meantime, she has introduced her friends in Chicago to Hindi songs and Indian food. She continues to text her host family in Hindi, “They even sent me pictures of Diwali and said they wished I was there.’’