Amy is from Shoreview, MN and participated in the Arabic Summer 2018 program in Morocco.

During my first week in Morocco, I was overwhelmed by the stark contrast between Rabat, my host city, and Minnesota. Everything was so different: the food, clothing, streets, and above all, the language. Shwiya b shwiya (little by little), however, I discovered connections between Morocco and my life in the United States through the people I met. I left Rabat at the end of the summer with the realization that no matter how different people seem from the American “norm” on the surface, we have a lot in common. 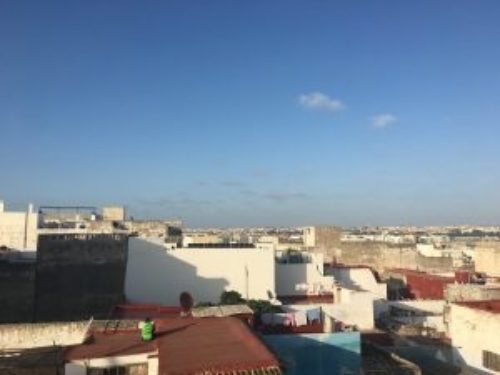 One evening, as I sat in the living room with my two younger host sisters, I was startled by a familiar sound. It was the theme song to my favorite cartoon, Masha and the Bear. In the U.S., I watch it in Russian, but my sisters in Morocco listen to the Arabic version, ماشا و الدب. They were delighted to learn that we share a favorite cartoon, and over the following weeks we bonded by watching ماشا و الدب and other cartoons they introduced me to, especially Mr. Bean (مستر بين). As we sat squished together on the Moroccan sofa with their iPad cradled between us, my nine year old sister and I would trade words: “Shnu hadha?” I would ask when I didn’t recognize a phrase in the video. What’s that? She would respond by describing the words in Arabic and asking for the English.

Moroccans, like Midwesterners, love a good deal. I lived with my family in the market area, or مدينة قديمة. Over the course of the summer I bought many things from the various shops and stalls in the crowded streets: a pair of loose pants for our excursion to hot Marrakech, a traditional djellaba for our graduation ceremony, a rug, chess set, eggs, countless bottles of سيدي علي (a brand of water), and even a watermelon. Moroccans are expected to bargain down the prices before they pay, but learning to hassle shopkeepers in Arabic was a skill I never quite mastered. During our last week in Rabat, my roommate and I went out several times with our older sisters or host mom to walk hand and hand with our younger sisters through the winding streets and get the best prices on clothing and leather bags for our return home. Watching our Moroccan sisters talk to the storekeepers for minutes to drop the prices by a matter of a few dirhams reminded me of my parents shopping for the lowest prices at grocery stores and asking for discounts at garage sales. My roommate compared bargaining in the medina to her experiences in markets in India. 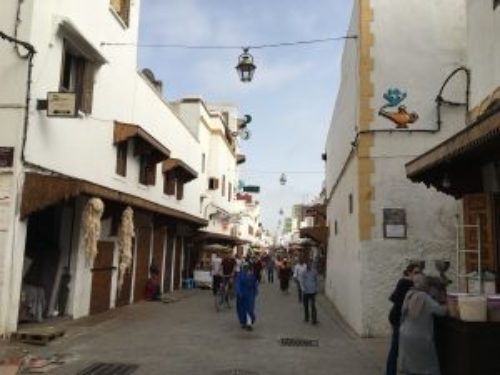 I was surprised to find that many Moroccans listen to English music. During our first week in Rabat, students in our NSLI-Y cohort visited Mawazine, a music festival featuring artists from Morocco, the U.S., and other countries. One of the stages was a short walk from our house and I could often hear the faint sound of music in the evening. American singers such as the Chainsmokers, the Weeknd, and Bruno Mars drew large crowds of Moroccans - my host brother even played Drake’s new album around the house. I woke up late one night to hear the remix of the Walmart yodeling kid being blasted at full volume somewhere nearby in the medina. Even in Morocco, more than four thousand miles and an ocean away from the song’s origin, I was not safe from the Walmart yodeling kid.

After classes, I loved to walk around the medina and take pictures of the street art and graffiti covering the city. Just like in the United States, the streets of Rabat feature drawings and phrases spray painted onto the walls by angsty Moroccan teenagers. My favorites were the words “Hardcore Kids” painted on a ledge outside the Mohammed VI Museum of Modern and Contemporary Art and a series of tiles spotted throughout the city. I learned to navigate the streets around my house by following the street art: turn right after the yellow graffiti of the two boys playing, turn left at the floor to ceiling mural of the woman in the pink hijab. Since returning to the U.S., I’ve enjoyed finding street art here that reminds me of Morocco. 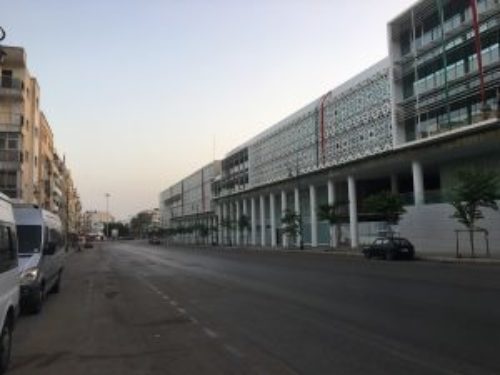 I learned so much about myself, Morocco, and the United States through my summer with NSLI-Y, but above all I learned the value of human connections and how similar people are - even an ocean apart.