NSLI-Y Students Celebrate the Holidays Around the World

We are excited to showcase the different ways NSLI-Y students around the world spent their holiday season. From performing Peking Opera in Beijing to celebrating with their host families in Taiwan, we know this was a holiday season our students won't soon forget!

The NSLI-Y Chinese group in Beijing performs a singing and dancing combination routine for their host institution's annual Christmas gala.

The NSLI-Y Chinese participants took center stage at their host institution’s annual Christmas gala on December 24th. The students not only performed multiple group routines, but also volunteered to host the Gala and perform with Chinese students. The gala was completely in Mandarin and students the opportunity to spread their American holiday cheer with their classmates, host families, and peers.

NSLI-Y China Participants Ryan, Bradley, Verity, and Abigail reenact a scene from the Peking Opera, an elective class in which many NSLI-Y participants are enrolled.

The gala was a unique experience for the students, as this was for many of them, their first holiday “in Chinese.” Their classmates and teachers were thoroughly impressed with their continued language advancement, and feel their language acquisition will only increase in the coming year. 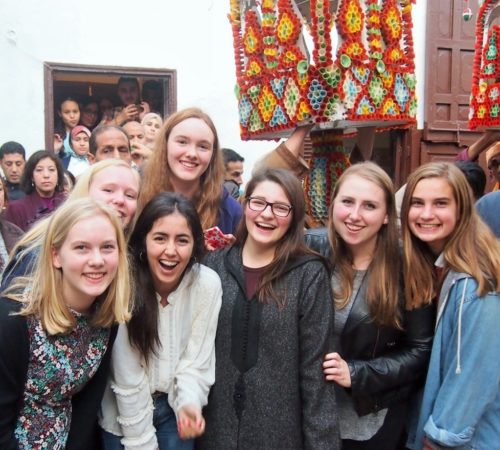 NSLI-Y students Chloe-Kate and Florise with YES Alumni and YES Abroad students at a celebration in Sale for the Prophet’s birthday.

On December 23rd, the NSLI-Y and YES Abroad Morocco students were invited by a YES Alumna to her family house to participate in their traditional celebration for Eid al-Mawlid, or the Prophet Mohamed’s birthday. The students watched a parade with traditional music and elaborate wax covered art. Afterwards, they ate couscous and lit a candle for peace. The week-long festivities in Sale have been happening for many years and it brings the whole city together for Eid al-Mawlid.

From the beginning of December, the holiday spirit was in the air in Taiwan. While the NSLI-Y students were rigorously studying for their classes, they could not wait until December 22nd, the day of the holiday party with their host families.

That day, the students arrived early to help prepare the holiday decorations and bake cookies at Jacaranda, a restaurant in Kaohsiung famous for their Chicago deep-dish pizza. As host families arrived, the students guided them to sign their names on their tree and take pictures with Santa (rumored to be NSLI-Y student, Brayton). 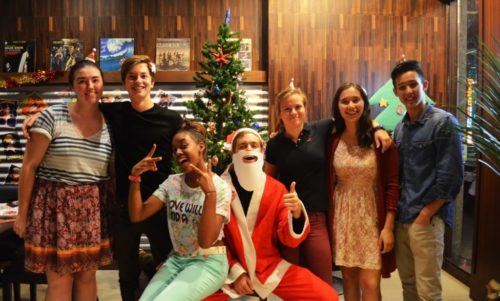 NSLI-Y Chinese students in Taiwan pose with Santa by their DIY Christmas tree.

During dinner, the students gave a surprise performance for their families. They opened their act by singing ‘Jingle Bells’ in Mandarin and ‘We Wish You a Merry Christmas.’ Next, they performed a skit in Mandarin, which explained how many American families traditionally like to go to the mall during the holidays to take pictures with Santa. The performance ended with a beautiful rendition of ‘Santa, Baby’ sung by Deja and Baek, with Brayton and Alex as backup dancers.

The night ended with cookie decorating and a game of White Elephant, where each family got to take home a random present. Overall, the night was a cozy celebration and allowed the students to positively experience the holidays abroad. 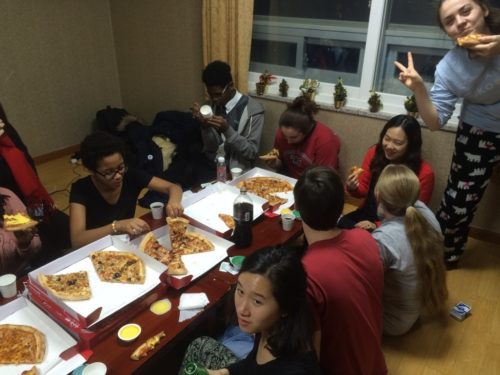 NSLI-Y Korean students enjoy pizza together at their holiday party.

On December 24th, the NSLI-Y Korean students gathered at Seoul Youth Hostel for a night of fun festivities. The party began as the students, decked in their pajamas, enjoyed a pizza dinner while listening to holiday tunes. After dinner, the students opened presents from their Secret Santas. With each present opened, each student guessed who his/her Secret Santa was. Much laughter ensued and students were touched by the gifts they received, making it a true holiday atmosphere. Following the gift exchange, the students conducted a talent show, during which they teamed up and danced and sang. The party continued with games such as ‘Mafia’ and ‘Truth or Dare.’

NSLI-Y students around the world had a very unique holiday season and shared their traditions with their host families and friends. We hope you had a holiday season as wonderful as ours, and we want to wish you a joyful 2016!