Jacquelin is from Irvine,CA and participated in the 2017 Korea summer program. 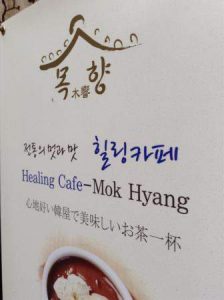 The tea house is located on the second floor of a traditional Hanok house and is pretty small compared to other tea houses I’ve been to. We sat at a nice table and ordered. The drinks are around the 7,000-8,000 won range just like the other tea houses. I think maybe a little cheaper than the other two I’ve been to but I’m not so sure.

Jack’s host family took me and I got ginseng/honey tea. Mom got citron tea and Jack got the traditional cinnamon punch drink. We all shared baked tteok and injeolmi tteok. I liked the soft injeolmi tteok over the baked. It was my first time trying the baked tteok and it was a different texture. Crispy on the outside and chewy on the inside. You would dip it in the syrup for flavor. Otherwise, it would just be tteok.

My favorite drink I think would be the 수정과 Sujeonggwa Korean cinnamon punch. I love the taste of the combination of the spices and the sweetness of the persimmon. In Jack’s drink, there were also dried persimmons in it. 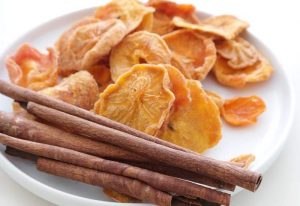 I really enjoy visiting traditional tea houses and plan on experiencing more when I return to Korea. Although, maybe I’ll prefer going to the other tea houses for the more traditional experience. I don’t think I’ll return to Mok Hyang again, but that’s just because I like having the pretty courtyard and the sitting on the floor experience that 47th has. 47th Avenue Tea House 47번가 찻집 I liked the smoothies at Ban Chak too so I’ll be stopping by there. Korean Traditional Tea Dessert Cafe in Insadong 반짝반짝 빛나는 차 인사동

Mok Hyang, I enjoyed experiencing the tea there and having to relax with Jack’s family, but I want to go somewhere a little more traditional than just being inside a traditional house.

My next tea house stop: Suyeonsanbang!