Identity, Nationality, and Community in Morocco

Shraddha is from Round Rock, TX and is participating in the NSLI-Y Arabic Academic Year 2019-2020 in Morocco.

“American… hmmm, but where are you really from?”

It’s a question I hear multiple times each day, and at this point, I’ve made it into a game, because as a brown girl, saying “American” is never a satisfactory response. 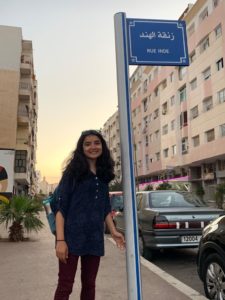 Occasionally, people are spot on, greeting me with “Namaste” on the street, but surprisingly, the most common nationality assigned to me has been “Syrian.” Often, after an exchange with a shopkeeper or someone I meet in the street, I’ll be asked if I’m “souriyyeh.” I’ve been making a list of all the “alternative nationalities” given to me, and so far I’ve gotten Palestinian, Lebanese, Egyptian, and even Tunisian. No matter how much I try to speak in Darija, the Shaami accent is here to stay, and I guess it’s quite apparent. Even though I know that I will never quite sound “Moroccan,” I won’t lie; it is quite flattering to pass off as an Arabic speaker, even though I probably wouldn’t be confused for a native speaker in an actual Shaami-speaking country.

Most interestingly, this is the first time that I am living in a country for an extended period of time where nearly everyone looks like me. And it’s wild. Like really, is this how white people feel in the U.S.? Back home, my skin color was always something I noticed, and in any public space, I would unconsciously look around for people of color near me. Here, I am suddenly in a position of privilege, because I am Moroccan-passing. Multiple times, I’ve been stopped on the street by locals for questions about directions, and in general, until I speak, no one makes the assumption that I’m a foreigner, and in short exchanges, people usually don’t notice. As a result, the way I’m treated here differs dramatically from many of my peers, both white and students of color. To clarify, other students with the same ethnic/racial background have had very different experiences in terms of how their skin color is perceived, but I have been privileged because it just so happens that the specific shade of my skin and hair matches the majority of people here. I guess I can compare it to the idea of being “white-passing” in America; here I “belong” and enjoy privileges on the basis of my skin color and appearance, even though I am an outsider in many ways.

Despite “fitting in” in terms of my appearance, I must admit that I truly miss being part of my cultural community back home. I miss dancing to Bollywood music with friends, coming home and speaking only in Hindi, or eating my favorite Indian foods. Fortunately, however, in the past two weeks, I’ve discovered an exciting way to stay closely in touch with one of the most important parts of my cultural heritage: my language. 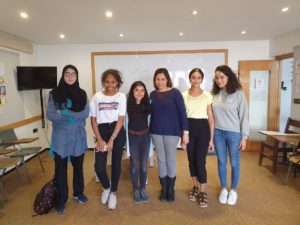 With the students of the Hindi-Urdu Club.

Since last week, I’ve started teaching at the Hindi-Urdu Club at the American Language Center (ALC), and it’s become a highlight of my week. The ALC is an English-language learning center for Moroccan students, and it offers free weekend clubs for students. While the first week was more a chance for me to observe and get a feel of the club, this week, I independently taught the Year Two students, consisting of a group of five sweet girls close to my age. In addition to practicing verb conjugations and introductions, we talked about our favorite Bollywood movies. It’s so nice to meet people here in Rabat who are so passionate about my culture, and I’m so excited to become closer to them over the weeks! ❤ 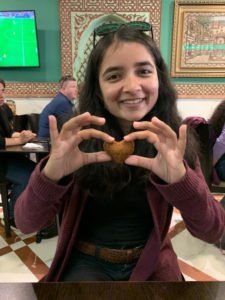 In addition to getting to speak the language, I’m learning as I teach. As a heritage speaker, there are a lot of grammar concepts that I have never really thought about, so I’m forced to better understand why we talk the way we do. In addition, the class is conducted in both the Hindi and Urdu script, so for the first time, I’m actually learning how to read and write. In the past, I informally self-studied both scripts, so while I can read Devanagari and Nastaliq, writing is a bit of a nightmare. However, by being forced to write words and the board (while acting like I know what I’m doing), I’m really learning how to spell and improve my awful handwriting.

Nearly two months in, I am getting used to calling Rabat my home. I’ll never quite be “American” enough– both here and back home, but I’m glad to be able to live parts of my Indian-American life in this city. Months ago, I would never have thought of finding Moroccans my age who were obsessed with my language, and I certainly couldn’t have imagined teaching Hindi in a real classroom setting. But I here I am. The Moroccan-passing Indian-American who is assumed to be Syrian. The proud Hindi speaker who is able to share her cultural heritage with a new group of people. The exchange student who is finding community so far away from home.