Stacy is from Pleasanton, CA and an alumna of the Chinese AY 2018-19 program in Beijing, China. My host family’s hometown 彭水 Pengshui is the quintessential China of my imagination — a city built right in the thick of dark green mountains, perpetually blurred by a misty fog; a river running directly through the city, broken up by bridges that light up at night and reflect in the water; little buses or subways so people walking everywhere, ascending and descending countless stairs and elevated roads; shiny office buildings towering above the open-garage-style shops and food stands lining the streets, sometimes just a man roasting potatoes on an abandoned step; a thick accent/dialect my host sister can only partially understand, much less me. Like two summers ago when I visited my Xi’an host family’s hometown, I’m struck by how much a family and childhood is preserved in their 老家 hometown, as well as just different family structure overall. Of course every family’s different both in the US and abroad, and in a sense my experience in this one feels new merely because here I’m the older cousin, as opposed to my family back home where all my cousins are older than me and my siblings, and now all adults. But it’s also different because Chinese families are more structured and hierarchical; my host parents aren’t called uncle and aunt by the cousins, but rather 三爸 Third Father and 三妈 Third Mother (he’s the third son). Every member has their place; and many remain in their hometown too. Our days are spent house-hopping; breakfast at 二爸 Second Father’s, lunch at 二姐 Second Sister’s, taking off with a couple cousins to 五爸 Fifth Father’s to watch a movie, then returning to 大爸 First Father’s for the evening. 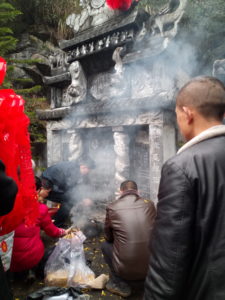 The difference between developed and undeveloped, rural and urban, wealth and poverty, seems smaller in a place like this, simply a nuance of culture rather than precise opposites. For example: my host cousin’s home, a crowded apartment complex whose dirt-covered windows and hanging laundry outwardly appeared almost slum-like, but luxurious interior and fingerprint-scanning lock system proved otherwise. Example: my host family enjoying a chandelier-lit banquet at our five-star hotel one night then seeming just as satisfied with the streetside 7 kuai (~ $1) bowl of 米粉 noodles the next, and 考全体 a whole skinned roasted lamb that you eat by putting on gloves and tearing off chunks the next. Example: wearing a suit and leather shoes, or pink fur coat and stylish boots, to tromp across the muddy fields. Call me narrow-minded, but previously I separated these two lifestyles in my mind; there’s the white-collar professional living in a city high-rise or a spacious suburb property, dressing and dining as befits their high salary; then there’s the rural farmers, enjoying a perhaps just-as-happy but simpler life, working and living off the land, joining the bustle of the street vegetable market every morning. Here at least, the two lifestyles are melded, also inextricably intertwined with the concept of 老家 hometown. My host family lives a certain way in Beijing, but is perfectly at home in Pengshui during the holidays, and going even further, in the rural fields on the city outskirts where their ancestors graves lie. 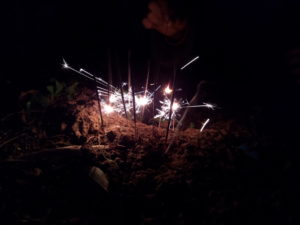 One of the first days in Pengshui was spent driving an hour or so to those graves to pay their respects, an annual tradition. Across the above-mentioned muddy fields, they surrounded their grandparents’ 坟头 grave mound (engraved with each descendant’s name) with cut flowers, then hung red and gold streamers, then tossed paper and fake cash into a fire in front (to send money to their ancestors), then bowed thrice holding incense sticks, then set off firecrackers. Walking down back toward the parked cars, booms reverberating through the mountains behind me, the women and children scrambling down one-by-one while the men finish the firecrackers, I couldn’t help thinking that witnessing this ritual was such a cool cultural experience, trying to see everything and learn the meaning behind everything, yet for them it was just a normal part of life, a duty and tradition you do because that’s what’s done — but that’s what culture is in the first place right? *interesting side note: they did this for both a biological and an adopted set of grandparents **interesting side note two: their customs also follow their identity as 苗族, an ethnic minority 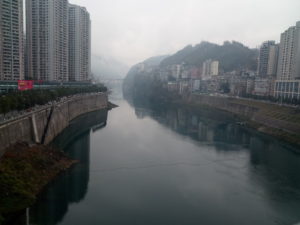 Chinese New Year’s eve was similarly culturally meaningful yet still just daily life — extended family gathering together to spend early afternoon til midnight, feasting together, children receiving 红包 red envelopes of money, going outside to set off and enjoy all kinds of fireworks and sparklers, watching the elaborate 春晚 New Years TV program til the countdown. The men gathered around the kitchen table playing cards and smoking cigarettes, the women chatting on the couch, babies in their laps, toddlers running around sometimes demanding attention sometimes content in their own imagination, and the kids in another room for the better part of the night playing phone games. Remembering my own family gatherings at home, this felt both new and familiar both on a cultural level and a family level. Culturally, it’s similar yet different from the quintessential American New Years Eve — both social gatherings, plenty of food, fireworks, staying up til midnight, a special New Years eve TV program — but specifically family-focused not friends, Chinese dishes, sunflower seeds and mandarin oranges instead of potato chips, a national broadcast of dancers/singers/skits/martial arts/military well-wishes rather than a panning of the crowd at Times Square, and the fireworks… I’ve seen a number of brilliant fireworks shows, from the Fourth of July on Capitol Hill to the biggest fireworks show in western Japan in Kyoto last summer. This night wasn’t perhaps the most spectacular, but the most magical, a more peaceful, more beautiful memory. One of the adult cousins took the four kids including me outside to buy and set off all kinds: sparklers, poppers, helicopter ones, ones like fountains, ones that rain showers of golden sparks when swung around on a chain. A childlike excitement and satisfaction from lighting it yourself came back in full force, reminding me a bit of when I’d do the same on my grandpa’s farm a decade ago (now I feel old)…but the most magical part was the fact that each family was also doing their own fireworks, so the entire riverbank was bursts of color and light: traditional sky fireworks, streaming ones like shooting stars, white flashes, and of course clusters of sparklers like dancing fireflies in the distance — against a backdrop of lit-up trees and bridges and city — and all reflected in the water. 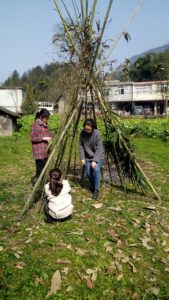