Katie is from Tallahassee, FL, and is an alumna of the Arabic Summer 2019 program in Rabat and the virtual Arabic Academic Year 2020-21 program.

I never thought I’d find a disco beat in the souq.

Music constantly filled the medina, my summer home while I studied in Morocco with the NSLI-Y Summer 2019 Arabic program. One night, an unexpected beat boogied through the souq: Earth Wind & Fire’s “September” blared from a small blue house in the heart of the medina. My seventeen-year-old host sister and I were eagerly exchanging our favorite music with one another, and I was sure to share some of the classics. Despite the language barrier between my host family and I, we did not need to be fluent in each other’s languages to share our love for music.

Days passed by entirely in Darija—a dialect of Arabic with influence from French, Spanish, and Amazigh languages—leading me to latch onto the familiar nuances that offered a semblance of understanding: the steep rise in pitch that marks a question, the harsh way in which geminates and consonant clusters of conjugations attack the air, the unabating reassurance of “shwiya b shwiya” (little by little). Shortcomings of my attempts to surpass the language barrier left me drowning in a sea of conversation and unable to partake in it. Learning Darija was unlike my endeavors examining textbooks or simplifying equations; language is living and it is lawless. While attempting to implement a newly learned verb in conversation, my host sister would quickly tell me that, contradictory to the textbook, a slightly different conjugation is used. She realized my frustration. 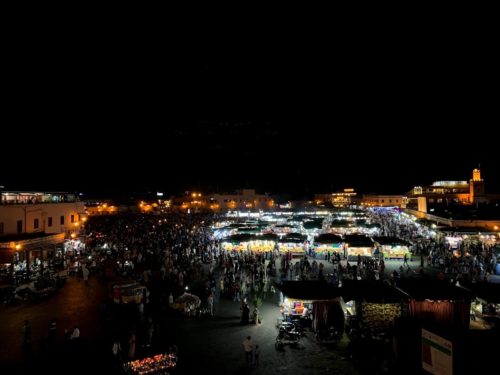 Pictured above: Jemaa el-Fnaa (جامع الفناء), the main square of the Marrakech medina. Jemaa el-Fnaa is known for its souqs but also for its many artists and musicians (Gnawa musicians, specifically).

Early on in the program, my host sister and I adopted the daily practice of watching Chada TV—a music video channel—in our free time. Harmonic scales and semitones of Moroccan pop music became commonplace in the little blue house in the heart of the medina. Yet as the daily countdown of Morocco’s top hits enticed its crowd of two, my lack of familiarity with Darija taunted me. Meticulous hours spent studying my textbook and memorizing verb forms meant nothing to the colorfully-clad pop singers as they threw about slang, conjugated verbs, and rhymed words in a manner that made my attempts at studying a vain reach towards proficiency.

However, with the help of my host sister, Chada TV became an unexpected resource in my Darija learning. In the first few days on program, the large majority of my new vocabulary came from songs that my host sister would play on repeat and then translate. From the radios of the petit taxis navigating Rabat to the speakers of souq stores blasting Mok Saib and Salma Rachid, music was an integral part of my daily routine while on program. As I listened to songs for what seemed like hundreds of times, I slowly began to learn lyrics. 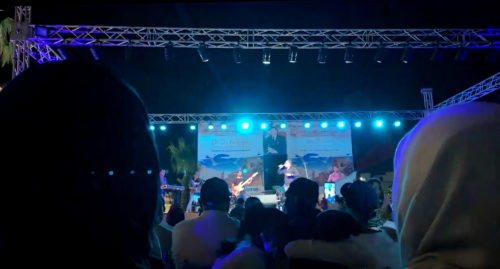 Pictured above: A concert in the Rabat Kasbah des Oudayas that I went to with my host sisters.

Weeks into my NSLI-Y program, time spent watching Chada TV became my means of studying. My host sister’s song explanations went more in-depth, and I finally understood what those colorfully-clad pop singers were singing about. One day, the tables of the lesson turned—my host sister asked what my favorite songs were. She did not know what she was getting into with asking me this seemingly innocent question. As someone who spends my free time meticulously organizing and picking perfect songs for my playlists, this question warranted a very long response.

My host sister’s question became an exchange. After a few minutes of discussion, we relocated to the computer, taking turns manning our makeshift jukebox and sharing songs with one another. Hours passed like this. I listened to my host sister explain the linguistic intricacies of her favorite tunes and she watched as Earth, Wind & Fire members grooved to a beat that I found familiar. 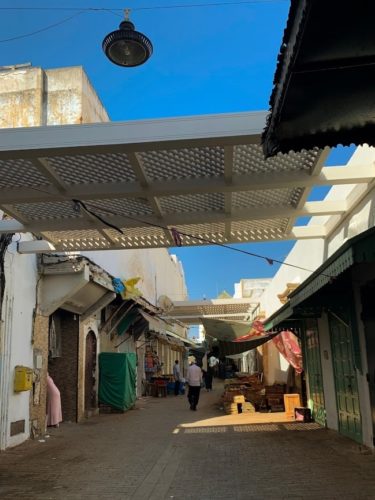 Pictured above: My home, the Rabat medina, on an empty afternoon. Though seemingly empty from the photo, the medina was full of music playing from the many radios of Rabat.

Following my NSLI-Y program, I have continued to use music as a central part of my language learning. Listening to music while on the 2020-2021 virtual Academic Year program kept me immersed in Darija, and sharing playlists became a means to bond with program staff and language partners in spite of the distance. During this program, I even had the opportunity to interview Moroccan musicians in Darija while completing an Arabic-language research paper on Gnawa music. My NSLI-Y programs allowed me to progress from first having to latch on to one or two Darija words in my favorite songs, to interviewing musicians in Darija, to teaching others about music and social movements as a co-facilitator in a bilingual Arabic-English class with the Yallah alQuds program in Summer 2021.