And Надежда Was Found in the Квартира 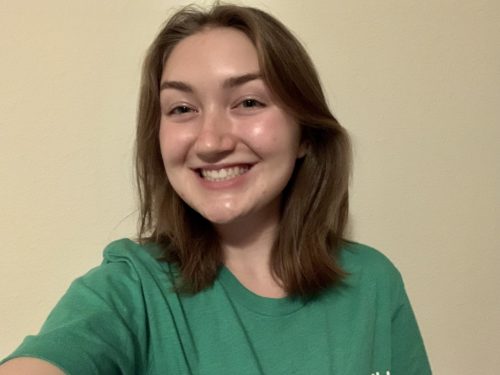 Megan, hailing from Modesto, California, is an alumna of the Winter 2022 Russian Virtual NSLI-Y program.

I shuddered just looking at the photograph. 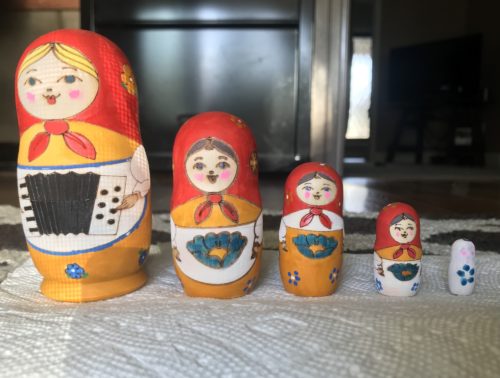 A Матрёшка or Russian stacking doll that I was able to paint in class.

My Russian class had a guest speaker on Soviet Union architecture that day. She was born and raised in the Казахская Советская Социалистическая Республика (the Kazakh Soviet Socialist Republic), which now constitutes the country of Kazakhstan. And despite her piercing eyes, high cheekbones, and sharp, angular nose, her voice was soft and sweet and cascaded down from between her lips like warm honey. Her name was Надежда, meaning “hope”.

In the next thirty minutes, I learned that much of Надежда’s life was spent sandwiched between the walls of one of those cold, cookie-cutter квартиры. Apparently, the apartments were built upon the orders of Nikita Khrushchev during the 1950’s housing shortage. Back then, the industrializing cities were swelling with workers who needed housing - immediately.

So voila, квартиры were born.

They were built of either bland concrete panels or brick, but that didn't matter too much. Both became thin paper against the harsh northern winters. Each building could have up to five flights of stairs but no more. More would have necessitated elevators. And, typically, there were only two rooms, besides the kitchen and bathroom of course. And Бабушка and Дедушка, Мама and Папа, and any братья and сестры lived stacked on top of one another like one big, multi-generational матрёшка. There was no privacy whatsoever. I was dumbfounded.

Надежда asked us if we had any questions - по-русски, naturally.

I wanted to scream because I had so many. I wanted to ask how she remained a warm spring breeze in the dead of winter, and how she stayed sane in that forbidding, congested house, and how she found hope in the melancholy. But I didn’t have the vocabulary skills to ask any of those questions. All I managed was to raise my hand timidly and stutter, “Как вы думаете, где лучше жить в России или США?” (Do you think that it is better to live in Russia or the USA?) 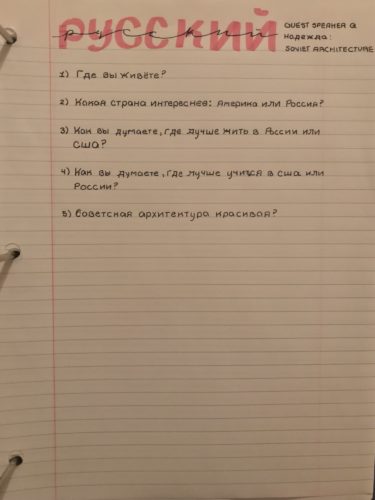 An assignment ahead of our guest speaker visit. We were challenged to use the grammar and vocabulary skills that we had developed to ask a series of questions related to our speaker’s presentation in our target language.

Надежда pursed her lips. I could tell that she understood.

Still, I was perplexed.

And Надежда was patient with my ignorance. She described how families concealed their thin walls of all-consuming gray with the dramatic, colorful patterns of Uzbek carpets. The rooms were warmer that way, or at least they felt warmer. As for the stairs, they were bearable. You could reason that they gave good exercise to keep the body warm. And while her family lived shoulder-to-shoulder with the living room as a dining room during the day and a bedroom during the night, they were together. And they loved each other.

And I did, I understood. Надежда - hope - was found in the квартира. 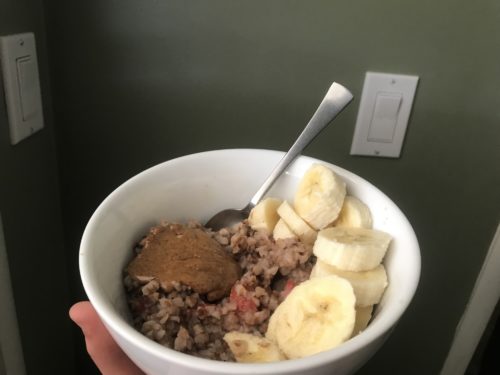 Kasha: a buckwheat porridge, similar to oatmeal, that is very popular in Russia.